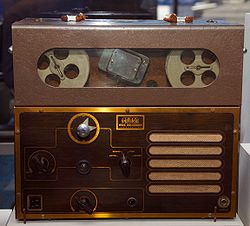 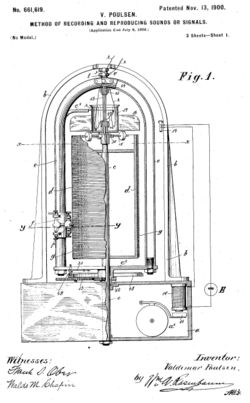 First US patent for a magnetic recorder; Valdemar Poulsen, inventor.

Wire recording is a type of analog audio storage in which a magnetic recording is made on thin steel or stainless steel wire.

The wire is pulled rapidly across a recording head which magnetizes each point along the wire in accordance with the intensity and polarity of the electrical audio signal being supplied to the recording head at that instant. By later drawing the wire across the same or a similar head while the head is not being supplied with an electrical signal, the varying magnetic field presented by the passing wire induces a similarly varying electric current in the head, recreating the original signal at a reduced level.

Magnetic wire recording was replaced by magnetic tape recording, but devices employing one or the other of these media had been more or less simultaneously under development for many years before either came into widespread use. The principles and electronics involved are nearly identical. Wire recording initially had the advantage that the recording medium itself was already fully developed, while tape recording was held back by the need to improve the materials and methods used to manufacture the tape.

The first wire recorder was a Valdemar Poulsen Telegraphone of the late 1890s. Wire recorders for dictation and telephone recording were made almost continuously by various companies (mainly the American Telegraphone Company) through the 1920s and 1930s, but use of this new technology was extremely limited. Dictaphone and Ediphone recorders, which still employed wax cylinders as the recording medium, were the devices normally used for these applications during this period.

The brief heyday of wire recording lasted from approximately 1946 to 1954. It resulted from technical improvements and the development of inexpensive designs licensed internationally by the Brush Development Company of Cleveland, Ohio and the Armour Research Foundation of the Armour Institute of Technology (later the Illinois Institute of Technology).[citation needed] These two organizations licensed dozens of manufacturers in the U.S., Japan, and Europe.[citation needed]

These improved wire recorders were not only marketed for office use, but also as home entertainment devices that offered advantages over the home disc recorders which were becoming increasingly popular for making short recordings of family and friends and for recording excerpts from radio broadcasts. Unlike home-cut phonograph records, which could accommodate only a few minutes of audio on each side, the steel wire could be repeatedly re-recorded and allowed much longer uninterrupted recordings to be made.

The earliest magnetic tape recorders, not commercially available in the U.S. until 1948, were too expensive, complicated and bulky to compete with these consumer-level wire recorders. During the first half of the 1950s, however, tape recorders which were sufficiently affordable, simple and compact to be suitable for home and office use started appearing and they rapidly drove wire recorders from the market.[citation needed]

Exceptionally, the use of wire for sound recording continued into the 1960s in Protona's Minifon miniature recorders, in which the importance of maximizing recording time in a minimum of space outweighed other considerations. For any given level of audio quality, the nearly hair-thin wire had the advantage that it was a much more compact storage medium than tape. The Minifon wire recorder was designed for stealth use and its accessories included a microphone disguised as a wristwatch.[1]

Wire recording was also used in some aircraft cockpit voice recorders and flight data recorders beginning in the early 1940s, mainly for recording radio conversations between crewmen or with ground stations. Because steel wire was more compact, robust and heat-resistant than plastic-based magnetic tape, wire recorders continued to be manufactured for this purpose through the 1950s and remained in use somewhat later than that. There were also wire recorders made to record data in satellites and other unmanned spacecraft of the 1950s to perhaps the 1970s.

Poulsen's original telegraphone and indeed all very early recorders placed the two poles of the record/replay head on opposite sides of the wire. The wire was thus magnetised transversely to the direction of travel. This method of magnetization was quickly found to have the limitation that as the wire twisted during playback, there were times when the magnetization of the wire was at right angles to the position of the two poles of the head and the output from the head fell to almost zero.

The development was to place the two poles on the same side of the wire so that the wire was magnetised along its length or longitudinally. Additionally, the poles were shaped into a "V" so that the head wrapped around the wire to some extent. This increased the magnetising effect and also increased the sensitivity of the head on replay because it "collected" more of the magnetic flux from the wire. This system was not entirely immune to twisting but the effects were far less marked.

The longitudinal method survives into magnetic tape recording to this day.

Compared to tape recorders, wire recording devices had a high media speed, made necessary because of the use of the solid metal medium. Standard postwar wire recorders used a nominal speed of 24 inches per second (610 mm/s), making a typical one-hour spool of wire 7,200 feet (approx. 2200 m) long. This enormous length was possible on a spool less than 3 inches in diameter because the wire was nearly as fine as hair. 30 and 15 minute lengths of wire were also available on these small spools, which were employed by the majority of recorders made after 1945. Some heavy-duty recorders used the larger Armour spools, which could contain enough wire to record continuously for several hours. Because the wire was pulled past the head by the take-up spool, the actual wire speed slowly increased as the effective diameter of the take-up spool increased. Standardization prevented this peculiarity from having any impact on the playback of a spool recorded on a different machine, but audible consequences could result from substantially altering the original length of a recorded wire by excisions or by dividing it up onto multiple spools.

To facilitate handling as the user threaded the wire across the recording head and affixed it to the take-up spool, some manufacturers attached a strip of plastic to each end of the wire. This was designed to press-fit snugly into either spool. To prevent the wire from piling up unevenly on the spool as it was recorded, played or rewound, on the majority of machines the head assembly slowly oscillated up and down (or back and forth) to distribute the wire evenly. On some machines, moving wire guides performed this function, like the mechanism that distributes line across a fishing reel. After recording or playback, the wire had to be rewound before any further use could be made of the machine—unlike tape recorders, the take-up reel on most wire recorders was not removable.

A break in the wire was repaired by tying the ends together and trimming. When such a repair was made to an existing recording a jump in the sound would result during playback, but because of the high speed of the wire the loss of an inch due to tying and trimming was trivial and might pass unnoticed. Unfortunately, if the wire broke it could easily become tangled and snarls were extremely difficult to fix. Sometimes the only practical solution was to carefully cut the tangled portion away from the spool—an operation which ran the risk of endlessly enlarging the problem—and discard it. The difficulty of handling the wire itself when necessary was arguably the only serious shortcoming, among several definite advantages, of steel wire as a monophonic recording medium.

Editing was accomplished by cutting and splicing. As the knot of each splice passed through the head during playback, a very brief loss of normal contact was inevitable and the resulting dropouts could make editing musical recordings problematic. Although wire was not as suitable for editing as plastic-based magnetic tape would prove to be, in the field of radio broadcasting it offered tremendous advantages over trying to edit material recorded on transcription discs, which was usually accomplished by dubbing to a new transcription disc with the aid of multiple turntables, stopwatches and a lot of patience. The first regularly scheduled network radio program produced and edited on wire was CBS' Hear It Now with Edward R. Murrow.

The audio fidelity of a wire recording made on one of these post-1945 machines was comparable to a contemporary phonograph record or one of the early tape recorders, given a microphone or other signal source of equal quality. Because of its homogeneous nature and very high speed, wire was relatively free of the noticeable background hiss which characterized tape recordings before the advent of noise reduction systems. The Magnecord Corp. of Chicago briefly manufactured a high-fidelity wire recorder intended for studio use, but soon abandoned the system to concentrate on tape recorders.

In 1944-1945, the 3132 Signal Service Company Special of the U.S. Army's top secret Ghost Army used wire recorders to create sonic deception on the Western Front in the Second World War. Multiple battlefield scenarios were recreated using military sounds recorded at Fort Knox, Kentucky. The wire-recorded audio, which was played back through powerful amplifiers and speakers mounted on vehicles, was used to conceal real Allied deployments, locations and operations.[2]

In 1944 at the Middle East Radio Station of Cairo, Egyptian composer Halim El-Dabh used wire recorders as a tool to compose music.[3]

In 1946 David Boder, a professor of psychology at Illinois Institute of Technology in Chicago, traveled to Europe to record long interviews with "displaced persons"—most of them Holocaust survivors. Using an early wire recorder from the Armour Research Foundation, Boder came back with the first recorded Holocaust testimonials and in all likelihood the first recorded oral histories of significant length.[4]

In 1946, Norman Corwin and his technical assistant, Lee Bland, took a wire recorder on their One World Flight, a round-the-world trip subsidized by friends of Wendell Wilkie and patterned after Willke's own 1942 trip. Corwin documented the post-war world and used his recordings in a series of 13 broadcast documentaries on CBS—which were also among the first broadcast uses of recorded sound allowed by the radio networks.[5][6]

In 1949 at Fuld Hall in Rutgers University, Paul Braverman made a 75-minute recording of a Woody Guthrie concert using a wire recorder. The recording only came to light in 2001, and appears to be the only surviving live recording of Woody Guthrie; it was restored over several years and released on CD in 2007. The CD, The Live Wire: Woody Guthrie in Performance 1949, subsequently won the 2008 Grammy Award for Best Historical Album.[7]

In 1952, the Harvard University physics department's musical variety show The Physical Revue, written and performed by Tom Lehrer, was recorded on wire; this recording was recently rediscovered and made available online.

Wire recorders sometimes appear in motion pictures made during the time of their widest use. For example, in office scenes in the original 1951 version of The Thing, a typical Webster-Chicago unit is plainly visible on a small table by the window. In some shots (e.g., at 0:11:40 on the 2003 DVD release), its detached lid, carrying two extra spools of wire, is also visible. In this instance the recorder is simply "set dressing" and is not shown in operation.

Though fictional, the Allied officers of Hogan's Heroes used a wire recorder to record a meeting in Kommandant Klink's office on a device that was disguised as a sewing box made of wooden thread spools.