Mount Jefferson is a stratovolcano in the Cascade Volcanic Arc, part of the Cascade Range, and is the second highest mountain in Oregon. Situated in the far northeastern corner of Linn County on the Jefferson County line, about 105 miles (169 km) east of Corvallis, Mount Jefferson is in a rugged wilderness and is thus one of the hardest volcanoes to reach in the Cascades; though USFS Road 1044 does come within 4 miles (6.4 km) of the summit. The lower reaches of the mountain's north side also extend into southeastern Marion County, although its summit does not. Jefferson's craggy, deeply glacially scarred appearance is especially beautiful and photogenic, and the peak has frequently served as a backdrop for automobile and alcohol advertisements in the United States.

Mount Jefferson (originally called Mount Vancouver by the British) was named in honor of US President Thomas Jefferson by the Lewis and Clark Expedition.[5] This was the only High Cascade mountain they named.[citation needed] The expedition, which was sponsored by President Jefferson, first saw the peak from the mouth of the Willamette River in March 1806.[5] A Native American name for the mountain is Seekseekqua.[6]

The first ascent was probably accomplished by E. C Cross and Ray L. Farmer on 12 August 1888 by way of the south ridge. George J. Pearce, who accompanied Cross and Farmer on the expedition, wrote an account of the climb for the Oregonian newspaper on 22 August 1900. The first climber to reach the summit via the north face was S. S. Mohler in 1903.[7]

One of the most complete studies of the volcano was compiled in a large report written in the 1920s by former professor of geology at the University of Oregon, Edwin T. Hodge. Probably due to its remoteness there has been little work done on a comprehensive study of the mountain since then. The most notable exception was a 1974 study of the volcano's glacial and volcanic history carried out by Kenneth G. Sutton.

The average elevation of the terrain around Jefferson is 5,500 to 6,500 feet (1,700 to 2,000 m), meaning that Jefferson's cone still towers nearly 1 mile (1.6 km) above it. Previous studies estimated that the cone is made of roughly equal amounts of tephra and lava, but Sutton's 1974 study found half as much tephra as expected. The remainder of the material thought to be tephra was in fact broken lava rock.

Sometime before the last reversal of the Earth's magnetic field 700,000 years ago, the 23.4-cubic-mile (97.5 km3) Minto Lavas created a large volcanic plateau formed from coalescing shield volcanoes. They were heavily eroded by glaciers before Jefferson started to grow.

Mount Jefferson started life as a highly explosive vent, which in turn built a tephra-rich cone (this same cone now forms the volcano's core). Much of this structure was subsequently buried under about 5 cubic miles (21 km3) of basaltic andesite lava flows that are called the Main Cone Lavas. These lavas form a mass of rock 5 to 40 feet (1.5 to 12 m) thick near the top of the old cone and become progressively thicker further down the mountain. 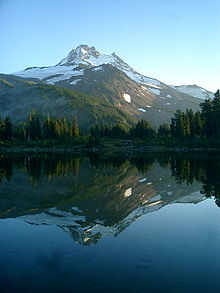 The lack of lahar (volcanic mudflow) or avalanche deposits associated with the original cone and the Main Cone Lavas indicates that these volcanic eruptions probably occurred in a warm interglacial period. Glaciers did form directly on the Main Cone Lavas and cause erosion later.

The volcano then went dormant for an unknown period of time, after which somewhat less than 1 cubic mile (4.2 km3) of andesitic lava flows erupted, forming a second stage cone on top of the original. These flows were thicker and had a higher silica content than the Main Cone Lavas. At the same time, two large cone complexes formed on Jefferson's flanks. The North Complex formed near where Jefferson Park now lies and another complex erupted 2 miles (3.2 km) south of the mountain's current summit (forming the reddish-brown dacite now seen at Goat's Peak). In addition, more silica-rich andesite lava flowed from fissures of the volcano's south flank.

A long period of dormancy returned to Jefferson. During that time a succession of large glaciers removed most of the second stage lava along with at least a third of the original cone. Erosion was more severe on Jefferson's western flank and as a result solidified lava flows on the volcano's eastern slope now compose the summit. Jefferson's height before this intense period of glacial erosion is estimated at 12,000 feet (3,700 m). Smaller versions of the ice age glaciers continue to erode Jefferson. Two of the largest, Whitewater Glacier east of the saddle-like part of the summit ridge and Milk Creek Glacier on the west side, threaten to collapse the low ridge that separates them.

Sometime between 40,000 and 140,000 years ago during a glacial maximum Jefferson changed its behavior from quiet eruptions of lava to violent explosions of pumice-rich tephra and pyroclastic flows. The most recent eruption was in 950 AD, with cinder cone formation.[8]

Jefferson's peak is the highest point in both Linn and Jefferson County, and a point on its north ridge at 9,000 feet (2,700 m) is the high point of Marion County. 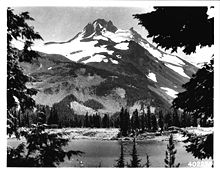 A view of Mt. Jefferson from Russell Lake.

The Mount Jefferson Wilderness area covers 111,177 acres (449.92 km2). The area has over 150 lakes. The mountain's namesake wilderness has 190 miles (310 km) of trails, including 40 miles (64 km) of the Pacific Crest National Scenic Trail. In addition to the trails, some of the most popular areas around Mount Jefferson Wilderness include Jefferson Park, Eight Lakes Basin, Marion Lake, Pamelia Lake, Jack Lake, Duffy Lake, Russell Lake, and Santiam Lake.[9][10]

There are five glaciers on the slopes for Mount Jefferson. They include Whitewater, Waldo, Milk Creek, Russell, and Jefferson Park glaciers. Other geographic features include rock outcrops, steep talus slopes, conifer forests, and alpine meadows.[9][10]