Catholic marriage, also called matrimony, is a "covenant by which a man and a woman establish between themselves a partnership of the whole of life and which is ordered by its nature to the good of the spouses and the procreation and education of offspring. [It] has been raised by Christ the Lord to the dignity of a sacrament between the baptised."[1] In the Roman Rite, it is ordinarily celebrated in a Nuptial Mass.

The nature of the covenant requires that the two participants be one man and one woman, that they be free to marry, that they willingly and knowingly enter into a valid marriage contract, and that they validly execute the performance of the contract.

On the exact definition of each of these steps hinge all the arguments and technical points involved in annulments, and annulment disputes (e.g., one of the most famous, that of Henry VIII). Catholic Canon law regulates the celebration of marriage in canons 1055–1065.

History of marriage in the Catholic Church

The history of marriage in the Catholic Church has been a continuation of the Judaic concept of marriage. Although at the time of Christ marriage was considered a necessary passage into adulthood, the Church introduced the notion into the ancient world that the celibate unmarried state was preferable and more holy. As a result of directly challenging the social norms regarding marriage and the buying and selling of women into marriage, and particularly in defending the right of women to choose to remain unmarried virgins for the sake of Christ, there were many virgin martyrs in the first few centuries of the Catholic Church. The stories associated with these virgin martyrs often make it clear that they were martyred for their refusal to marry, not necessarily simply their belief in Jesus Christ.

Although the Church was not opposed to marriage, the preference for the celibate state came from the example of Jesus, the concern about the imminent coming of the Kingdom of God as supported by Jesus and early followers such as Saint Paul, and the exhortation by Jesus to avoid 'earthly ties'. As a consequence, the first-century Christians placed less value on the family and saw celibacy (not marrying) and freedom from family ties as a preferable state. Paul had suggested that marriage be used only as a last resort by those Christians that found it too difficult to remain chaste.[2]

Nevertheless, recognizing that only a select few would accept this teaching of a celibate state of life, which Jesus had predicted, the Church sought to elevate the understanding of the marital state to a more noble and holy enterprise. The New Testament scriptures, most dating from before the middle of the second century, record the words of Jesus and of Saint Paul regarding the sacred and divine state of marriage. Jesus forbade divorce and stated that in the state of marriage "the two become one flesh". Saint Paul wrote one of the most often quoted descriptions of the proper behavior of spouses in the ideal sacramental marriage in the New Testament book of Ephesians, Chapter 5, referencing the words of Jesus. [3] Many theologians and early Church fathers have observed that the first recorded miracle of Jesus is at a wedding feast, thus, many believe, signifying his approval of the institution of marriage as well as his recognition of the importance of the public celebration of a wedding. [4]

Augustine, the Bishop of Hippo, believed that marriage was a sacrament, and wrote: "the first natural bond of human society is man and wife." [5] Other Church Fathers were more negative about the married state. Jerome wrote: "It is not disparaging wedlock to prefer virginity. No one can make a comparison between two things if one is good and the other evil" (Letter 22). On the extreme side, Tertullian argued that marriage "consists essentially in fornication" (An Exhortation to Chastity") Cyprian, Bishop of Carthage said that the first commandment given to men was to increase and multiply, but now that the earth was full there was no need to continue this process of multiplication. Augustine corrected this thinking and declared marriage good, "Therefore marriage and fornication are not two evils, whereof the second is worse: but marriage and continence are two goods, whereof the second is better." [6]

The early Church recognized matrimony as one of the seven sacraments, but did not consider them equal in importance. The sacraments necessary for initiation into the Church or for priestly ordination (Baptism, Confirmation, Holy Orders) were developed very early in Church history and were given a higher value and attention than some of the other sacraments because they were necessary for membership and also because they put an indelible mark on the soul.[7]. The sacrament of Eucharist was ritualized with the Last Supper and was celebrated from the earliest Church history. The rites for the lesser sacraments of Penance, Matrimony, and Extreme Unction developed over a longer time. Matrimony, for most of Church history, was a sacrament celebrated (as in the Judaic tradition) without clergy and was done according to local customs. The first available written detailed account of a Christian wedding in the West dates from the 9th century and appears to be identical to the old nuptial service of Ancient Rome. [8] 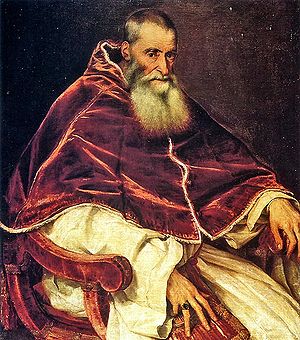 It was not until the sixteenth century, when the Protestant Reformation challenged the seven sacraments, including Matrimony, that the Church officially named the sacraments for the first time in Canon Law at the Council of Trent in 1547. Prior to that time the seven sacraments, including the sacrament of Matrimony were accepted as part of the apostolic oral and written tradition without controversy or debate. The Seventh Session of the Council of Trent stated that the seven sacraments were not new doctrine, but the Council saw a need to put information into the official Canon, "adhering to the doctrine of the holy Scriptures, to the apostolic traditions, and to the consent of other councils and of the Fathers."

The Church has consistently, since its beginnings, taken the position that a valid marriage is indissoluble. There is no divorce in the Catholic Church. But there are annulments, which can only be granted by Church bishops. This has led to many schisms, most notably that of Henry VIII of England, who was denied an annulment in 1527, and responded by forming the Church of England, declaring himself the head of the Church, and granting his own annulment. Pope Clement VII excommunicated him in 1533 and Paul III excommunicated him in 1538.

Conditions for a Sacramental Marriage

As understood within the Catholic Church, marriage is considered a sacrament if both the man and the woman are baptised, are able to marry, freely consent to the marriage, and meet all the other conditions that the church defines in her code of canon law as necessary for a valid sacramental marriage to exist. The Church provides classes several months before marriage to help the participants inform their consent. During or before this time, the would-be spouses are confirmed, if they have not previously received confirmation and it can be done without grave inconvenience (Canon 1065).

The participants in a marriage contract must be free to marry, and to marry each other. That is, they must be an unmarried man and woman, with no impediments as set out by Canon law.

In addition to being free to marry, the participants must intend marriage. In the Catholic Church, it is consent that creates marriage. Consent consists in a human act by which the partners mutually give themselves to each other. Consent must be a free act of the will of the consenting parties, free of coercion or grave external error. If freedom is lacking, the consent is invalid.

A Catholic marriage cannot be formed if one or more of the following impediments are given,[9] though of some of these a dispensation can be given. 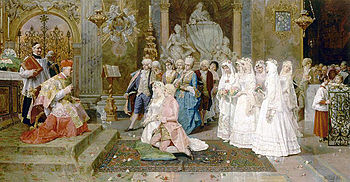 The husband and wife must validly execute the marriage contract. In the Roman Catholic tradition, it is the spouses who are understood to confer marriage on each other. The spouses, as ministers of grace, naturally confer upon each other the sacrament of matrimony, expressing their consent before the church.

This does not eliminate the need for church involvement in the marriage; under normal circumstances, canon law requires the attendance of a priest or deacon and at least two witnesses for validity (see canons 1108–1116).

In Eastern Catholic churches, which follow the Byzantine liturgical tradition (shared with the Eastern Orthodox and Oriental Orthodox churches), a priest (never a deacon) is the minister of the sacrament of marriage (see Catechism of the Catholic Church § 1623, 1992 edition) through the act of "crowning" the couple with a pair of crowns while proclaiming them received into the Kingdom of Heaven. The vows are exchanged well beforehand in the Byzantine ritual and are not binding. They are a remnant of the Liturgy of Betrothal which had used to be done in a separate Liturgy. Thus it is known in the East as the Mystery (read: Sacrament) of Crowning as often as it is called matrimony.

A marriage may be somewhat defective and yet still be valid; such a marriage is illicit. A marriage which was sufficiently defective as not to meet the required criteria is invalid, and the participants are considered not to have actually married. However, Canon 1137 states that children born to a "putative" marriage (defined in Canon 1061, sec. 3 as one that is not valid but was entered into in good faith by at least one spouse) are legitimate; therefore, the declaration that a marriage is null does not render the children of that marriage illegitimate.

Annulment and divorce, therefore, differ both in rationale and effect; an annulment is a finding that sacramental marriage never existed, whereas a divorce is a dissolution of marriage.