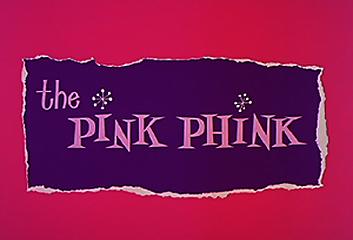 "The Pink Phink" was the first Pink Panther animated short released by and was produced at .

The Pink Panther and a painter (unnamed, but affectionately known as the "little white man" [Beck, Jerry. (2006) "Pink Panther: The Ultimate Guide to the Coolest Cat in Town!"; DK ADULT, ISBN 0756610338] ) compete over whether a house should be painted blue or pink. Each time the painter attempts to paint something blue, the panther thwarts him in a new way. Finally, the painter inadvertently turns the house and everything around it pink and the panther moves in. (Ironically, the sky turns from pink to blue as the pink sun sets.)

An episode of the , entitled "A Silent Cartoon", is a homage to this short; the short features Dexter (filling the role of the painter) trying to construct a blue laboratory, while an all-pink version of his sister DeeDee finds clever ways to turn the blue lab into a completely pink lab.