Year of the Dogs

Year of the Dogs

Infobox_Film
name = Year of the Dogs 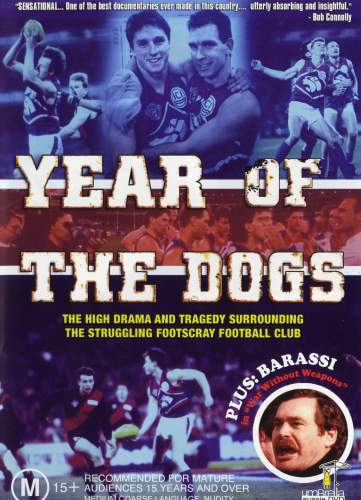 "Year of the Dogs" is a 1997 documentary detailing the 1996 season of the (now Western Bulldogs).

Filmed during the turbulent 1996 season where they finished second-last (15th) in the , the documentary follows the club and two dedicated fans, Pat and Jenny Hogson. The Bulldogs have a horror run of losses, forcing senior coach to resign mid-season, replaced by . The Dogs continue to struggle under this change in coaching administration, and continue to lose game after game.

With a thin supporter base, the club is under numerous financial difficulties. The AFL CEO is insistent that smaller AFL clubs must merge and the Dogs are under pressure to amalgamate with other clubs. After the merger failure, the club's members vote strongly against any proposed merger. In the end a taskforce of businessmen and former players take over the club to ensure its future. The club president () resigns.

In addition to this, youngest player (Shaun Baxter) is fighting and the club veteran ' playing days are numbered.

For the last game for the season, Footscray play Essendon. Wanting to give their retiring player, Wallis a good send off, they play hard and put up a good performance, but end up losing narrowly in a closely played game.

For the next season, the Bulldogs are named Western Bulldogs, (a name they still carry to this day) in an effort to attract new members. The film showcases the club's battling spirit, and as an aside they escape a merger (although the were the club that did suffer that fate). After Wallace's performance as caretaker, he is signed on for the 1997 season.

*It was filmed in 1996 and released theatrically in 1997, ironically when the Bulldogs were having one of their best seasons and later narrowly missed making the Grand Final.
*The film won an AFI award for "Best Editing in a Non-Feature Film" ().

*imdb title | id=0133282 | title=Year Of The Dogs
* [http://www.michaeldvd.com.au/Reviews/Reviews.asp?ID=6376 Review on MichaelDVD]
* [http://colsearch.nfsa.afc.gov.au/nfsa/search/display/display.w3p;adv=yes;group=;groupequals=;holdingType=;page=0;parentid=;query=Number%3A327455;querytype=;rec=0;resCount=10 Year of the Dogs at the National Film and Sound Archive]