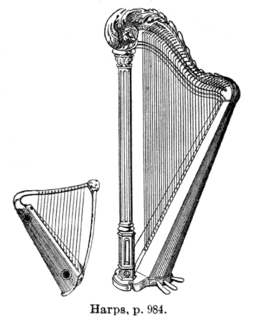 The harp, the instrument after which the nabla symbol is named

Nabla is the symbol

(∇). The name comes from the Greek word for a Hebrew harp, which had a similar shape. Related words also exist in Aramaic and Hebrew. The symbol was first used by William Rowan Hamilton in the form of a sideways wedge: ⊲. Another, less-common name for the symbol is atled (delta spelled backwards), because the nabla is an inverted Greek letter delta. In actual Greek usage, the symbol is called ανάδελτα, anádelta, which means "upside-down delta".

The nabla symbol is available in standard HTML as &nabla; and in LaTeX as \nabla. In Unicode, it is the character at code point U+2207, or 8711 in decimal notation.

Nabla is used in mathematics to denote the del operator, a differential operator that indicates taking gradient, divergence, or curl. It also can refer to a connection in differential geometry and to the backward difference operator in the calculus of finite differences, as well as the all relation (most commonly in lattice theory). It was introduced by the Irish mathematician and physicist William Rowan Hamilton in 1837.[1] William Thomson wrote in 1884: "I took the liberty of asking Professor Bell whether he had a name for this symbol

and he has mentioned to me nabla, a humorous suggestion of Maxwell's. It is the name of an Egyptian harp, which was of that shape".[2]

was introduced by Sir W. R. Hamilton and is now in universal employment. There seems, however, to be no universally recognized name for it, although owing to the frequent occurrence of the symbol some name is a practical necessity. It has been found by experience that the monosyllable del is so short and easy to pronounce that even in complicated formulae in which

occurs a number of times, no inconvenience to the speaker or listener arises from the repetition.

Use in naval engineering (or naval architecture)