I Write Sins Not Tragedies

I Write Sins Not Tragedies

"I Write Sins Not Tragedies" is a song by American rock band Panic! at the Disco, and is the lead single from their debut studio album, A Fever You Can't Sweat Out (2005). It was released on April 27, 2006 on both compact disc and 7 inch vinyl. The song was written by guitarist Ryan Ross. The song reached #7 on the United States Billboard Hot 100. This is the band's only top 40 hit in America. "I Write Sins Not Tragedies features a mandolin in the song's introduction.

In the UK, the song was released on February 27, 2006 as a limited edition single with a free sticker. Because the sticker was included with the CD single, the song was not eligible for the UK singles chart. UK chart rules state that stickers are not allowed in single releases. Later, in September 2006, due to the popularity of the track and following further single releases there of "Lying Is the Most Fun a Girl Can Have Without Taking Her Clothes Off" and "But It's Better If You Do", going top 40 there, the single was re-released on October 30, 2006. Despite receiving significant radio airplay upon its re-release, the single only reached #25 in the UK Singles Chart.

Many U.S. radio stations, in response to the language found in the song, wanted an edited version. The lyrics "The poor groom's bride is a whore" and "Haven't you people ever heard of closing the goddamn door?" were changed by replacing "whore" with a "shhh" sound and removing "god" in "goddamn". Some stations — generally modern rock stations – still play the original version.

The song was covered by Fall Out Boy, fellow Decaydance band, for their live album, ****: Live in Phoenix. (Fall Out Boy commonly uses the song's chorus as a lead-in to "This Ain't a Scene, It's an Arms Race" in concert.)

The title of the song refers to Douglas Coupland's novel Shampoo Planet, wherein the main character, Tyler Johnson, says: "I am writing a list of tragic character flaws on my dollar bills with a felt pen. I am thinking of the people in my universe and distilling for each of these people the one flaw in their character that will be their downfall — the flaw that will be their undoing. What I write are not sins; I write tragedies." 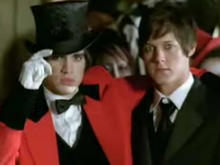 Brendon Urie and Daniel Isaac in the music video.

"I Write Sins Not Tragedies" is Panic! at the Disco's first single to have a music video. ("The Only Difference Between Martyrdom and Suicide Is Press Coverage" was the first single, but no video was filmed.) The video for the song takes place at a strange, circus-themed wedding played by the Lucent Dossier Vaudeville Cirque.

The video starts as the bride, played by Jessie Preston, and groom, Daniel Isaac, are about to be married. Her family dress and behave formally, but are revealed later to have fallen asleep and have eyes painted on their eyelids. His family are lower-class entertainers and carnival folk, and interrupt the wedding. The ringmaster, played by vocalist Brendon Urie, acts as narrator and disrupts the events. After an argument between the two families, the bride runs out and is followed by one of her guests. The ringmaster drags the groom outside by his tie, where his fiancée is kissing the guest who followed her out of the church. The groom straightens up, looking shocked, and Urie and the groom bow to the camera. The ringmaster is revealed to be the groom's alter ego.[1]

The music video by director Shane Drake won the award for Video of the Year during the 2006 MTV Video Music Awards. This marked the first occasion since the 1989 VMAs that the winner of Video of the Year did not win anything else. The video was also ranked #7 on VH1's list of the Top 100 Videos of 2006. [2]

The video was shot in December 2005. According to vocalist Brendon Urie, he and guitarist Ryan Ross suffered from the flu while filming the video clip.[3] Recently, the video won Best VMA Winning Video of All Time, on a world-wide poll on the MTV website.