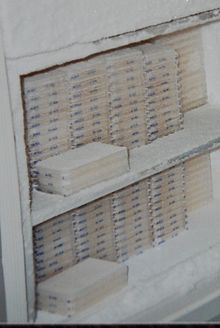 This is a photo of two copies of the Washington University Human Genome YAC Library. Each of the stacks is approximately 12 microtiter plates. Each plate has 96 wells, each with different yeast clones.

A yeast artificial chromosome (YAC) is a vector used to clone DNA fragments larger than 100 kb and up to 3000 kb. YACs are useful for the physical mapping of complex genomes and for the cloning of large genes. First described in 1983 by Murray and Szostak, a YAC is an artificially constructed chromosome and contains the telomeric, centromeric, and replication originsequences named autonomous replicating sequence needed for replication and preservation in yeast cells. A YAC is built using an initial circular plasmid, which is typically broken into two linear molecules using restriction enzymes; DNA ligase is then used to ligate a sequence or gene of interest between the two linear molecules, forming a single large linear piece of DNA.[citation needed]

Yeast expression vectors, such as YACs, YIps (yeast integrating plasmids), and YEps (yeast episomal plasmids), have an advantage over bacterial artificial chromosomes (BACs) in that they can be used to express eukaryotic proteins that require posttranslational modification. However, YACs have been found to be less stable than BACs, producing chimeric effects.[citation needed]

A typical YAC consists of centromere element (CEN) for chromosome segregation during cell division, telomere and origin of replication (ori) were isolated and joined on plasmid constructed in E.coli. For cloning purpose YAC is digested with restriction enzymes and recombinants are produced by inserting a large fragment of genomic DNA. This molecule can be maintained in yeast as YAC. The transformant that contain YAC can be identified by red/white color selection. Non-transformed yeast contain white colonies. Red colonies of yeast contain recombinant YAC molecule. Due to insertion of DNA molecule into EcoRI site, sup4 gene is inactivated and no proteins will be expressed . This facilitates to develop red colonies.[1]