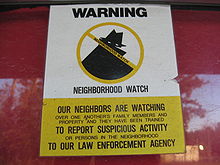 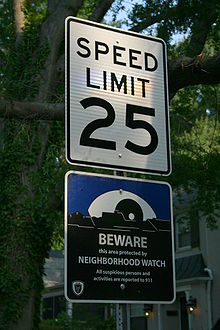 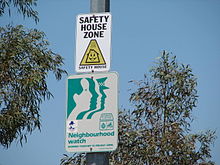 Neighborhood watches are not vigilante organizations. When suspecting criminal activities, members are encouraged to contact authorities and not to intervene.

The current American system of neighborhood watches began developing in the late 1960s as a response to the rape and murder of Kitty Genovese in Queens, New York. People became outraged after reports that a dozen witnesses did nothing to save Genovese or to apprehend her killer.[1] Some locals formed groups to watch over their neighborhoods and to look out for any suspicious activity in their areas. Shortly thereafter, the National Sheriffs' Association began a concerted effort in 1972 to revitalize the "watch group" effort nationwide.[2]

Some German states, such as Bavaria, have instituted systems of citizen patrols (Sicherheitswacht) where unarmed teams of two volunteers patrol assigned areas to improve subjective security. These teams carry a radio to call for help if necessary and a white armband with black letters identifying them as a neighborhood watch patrol.

Citizens in Baden-Württemberg can participate in a Volunteer Police programme, where approx. 1,200 citizens voluntarily assist their local police in 20 towns. These volunteers are specially trained, wear uniforms and are armed. Their main duty is crime prevention: conducting walking patrols to deter street crime, patrolling near schools and kindergartens and maintaining contact with potential victims of crime and juvenile delinquents.

There are also citizens in Hessen that participate in a Volunteer Police program, where they can assist their local police. The volunteers are trained for 50 hours, receive a blue uniform, pepper spray and a mobile phone. Their main duty is crime prevention: conducting walking patrols to deter street crime, patrolling near schools and kindergartens and maintaining contact with potential victims of crime and juvenile delinquents. People can also join the Wachpolizei which has less competencies (and less pay) than regular police to perform basic police tasks such as traffic or guard duties, releasing regular officers for patrol work.