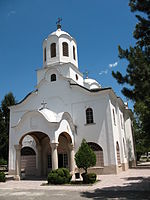 Lukovit (Bulgarian: Луковит) is a town in northern Bulgaria, part of Lovech Province. It is situated on both banks of the Zlatna Panega between the Danubian Plain and the foot of Stara Planina. As of December 2009, the town has a population of 9,630 inhabitants.[1]

The town was first mentioned in Ottoman registers of 1430. In 1495, it had 47 households. Between 1683 and 1687, Lukovit was part of an Ottoman process of forceful Islamization, but was not fully Islamized, having 250 Muslim Bulgarian and 260 Eastern Orthodox households in 1860. After the Liberation of Bulgaria, all the Muslims moved out.