The Southern Reedbuck, Rietbok[2] or Common Reedbuck (Redunca arundinum) is a diurnal antelope typically found in southern Africa.It was first described by Pieter Boddaert, a Dutch physician and naturalist, in 1785. It gets its name from two Latin words: Reduncas (meaning bent backwards and curved, while the horns are bent forwards) and Arundo (harundo)(meaning a reed; hence arundinum, pertaining to reeds). It has a life span of 10 years.[3]

The southern reedbuck has got distinctive dark lines that run down the front of each of its forelegs and lower hindlegs[4] and whitish rings around the eyes. The color of its coat ranges between light to greyish-brown, and may be lighter on the neck and chest.[3] The coat is silky and almost woolly.[5] A small, black, bare glandular patch can be noticed at the base of each ear. White fur covers the underparts and the areas near the lips and chin. The tail is white underside, and appears short and bushy.[4] Southern reedbucks measure an average 85 cm at the shoulder. Females lack horns. Males bear forward-curving horns, about 35-45 cm long, with the base having a distinct band of pale, rubbery tissue. Females weigh 50-85 kg, while the males weigh 60-95 kg.[4]

The southern reedbucks live in pairs or alone.[4] Sometimes they form herds, consisting of about 20 members. They prefer to lie in grass or reeds beds in the heat of the day and feed during sunrise and sunset, or sometimes even at night. Old reedbucks are permanently territorial, with territories of an area of almost 35-60 hectares, and generally live with a single female, preventing contact with rival males. Females and young males perform an 'appeasement dance' for older males.[3] During the dance the bucks run around speedily and take considerably long jumps, with the tail curled up and scented air being released from a pocket in the groin at every bounce, making a popping sound. Within this territory it is active all the time in summer, but it is nocturnal in the wet season. It uses regularly-used paths to reach good sites to rest, graze and drink water. Average lifetime home ranges have been estimated as 123 hectares for females and 74 hectares for males. 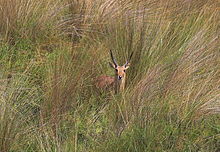 A southern reedbuck likes to inhabit grasslands with tall grass.

Its main predators include lion, leopard, cheetah, spotted hyena, Cape hunting dog, python and crocodile.[3][2] They can camuflage themselves in the grasslands due to their coats, which bear almost the same color. If startled or attacked, they stand still, then either hide or flee with an odd rocking-horse movement, and cautiously look back to ensure the danger is gone, generally.[2] They use vocalizations like a shrill whistle through their nostrils and a clicking noise to alert others about danger.[3]

As a herbivore, the reedbuck mainly feeds on grass. It also eats herbs and reeds. They never enter into water, though they inhabit places with water sources. It needs to drink water every few days to several times a day during the dry season.

The southern reedbuck breeds almost all the time of the year, although most matings occur during the hot and wet season. Females reach sexual maturity when they are two years old, when they leave their parent’s territory. Males, which reach maturity at a slightly older age, may remain with the family group until their third year. A single young is born per birth after a gestation period of 7-8 months[2], and remains amongst the dense and tall grass cover in which it was born for the next two months.[4] The female does not stay with her young, but instead visits it for just 10 to 30 minutes each day to nurse it.

The southern reedbuck has a wide distribution, stretching from Gabon and Tanzania to South Africa. It inhabits moist grasslands with tall grass, reeds, sufficient cover and water nearby, such as floodplains[4], pastures, woodlands[5] and valleys. It is native to Angola, Botswana, the Republic of the Congo, the Democratic Republic of the Congo, Gabon, Malawi, Mozambique, Namibia, South Africa, Swaziland, Tanzania, Zambia, and Zimbabwe.[1] It also occurs in protected areas and areas with low to moderate levels of settlement, including significant populations on private land in Zimbabwe, South Africa and Namibia. In Republic of Congo, it formerly occurred locally in the savannahs of southern Congo, but it is doubted to be extinct there by now. It's presence is doubted in Lesotho. Major populations occur in areas such as Selous National Park (Tanzania), Kafue National Park (Zambia), Nyika National Park (Malawi), Gorongosa National Park (Mozambique), Okavango National Park (Botswana) and Kruger National Park and Eastern Shores (South Africa).[1]

Southern Reedbucks remain widespread, but they have been eliminated from some parts of their former range (like Congo) by the spread of settlement which has led to habitat destruction and hunting for meat and trophies, as it is reportedly one of the easiest antelopes to approach and kill. About 60 percent of the all southern reedbucks is thought to occur in protected areas and about 13 percent on private lands.[1] This combination of habitat loss and overexploitation has resulted in the species becoming rare in most of south Africa, and reduced populations to precariously low levels in west and central Africa; those in Gabon and the Democratic Republic of Congo are feared to be almost extinct.[1]