Shih Ming-te or Shih Ming-teh (Chinese: 施明德; pinyin: Shī Míngdé, a.k.a. Nori; born January 15, 1941 in Kaohsiung) was a political prisoner for 25-and-a-half years in the Republic of China (Taiwan).

He was arrested at the age of 21 in 1962 and charged with creating the "Taiwan Independence League" (a study group) with the intention of overthrowing the Kuomintang government, Shih was sentenced to life imprisonment. The sentence was commuted to 15 years in 1975, and Shih was released on June 16, 1977.

He promptly joined the Tangwai (literally meaning "outside the party", because the Kuomintang was the only legally existing political party in Taiwan at that time), became a reporter for the Liberty Times and married the American researcher Linda Gail Arrigo. After playing a part in organizing the December 10, 1979 pro-democracy rally subsequently known as the Kaohsiung Incident, (also known as the Formosa Incident or Meilitao Incident), an arrest warrant was issued charging Shih with treason, and following 26 days on the run he was again arrested and sentenced to life in prison. In 1984, while he was incarcerated, Polish politician and Nobel Peace Prize laureate Lech Wałęsa nominated him for Peace Prize.

On July 1987, Chiang Ching-kuo lifted martial law and offered an amnesty to Shih, but he refused to accept. On May 20, 1990 he was finally released. In total, he spent 25 years in prison, 13 years in solitary confinement and over 4 years on hunger strike.[citation needed]

In 2006, Shih carried out a massive protest, known as Million Voices Against Corruption, President Chen Must Go, in an effort to force the embattled president Chen Shui-bian to resign. He led an around the clock sit-in in front of the Presidential Building and Taipei Railway Station in Taipei City, pledging to remain there until such time as President Chen resigned, or the reached the end of his term in March 2008. On December 5, 2006, he left Taipei Railway Station pledging to continue the protest alone in "self-reclusion" at an apartment nearby. As of April 2007, this protest has ended.

Shih was one of the most prominent personalities of the Tangwai movement and greatly contributed to Taiwan's democratization. He had been referred to by some as "Taiwan's Mandela".

In February 1947, Shih Ming-te witnessed the events in front of Kaohsiung Train Station that would later be known as the 228 Incident. The students of three high and vocational schools were executed and charged as instigators in front of the eyes of a six year-old Shih Ming-duh.

In 1954 he entered Kaohsiung Junior High-School; in 1957 he entered Kaohsiung's Chung-Cheng Senior High. In 1959 he volunteered for the army, passing the admission exams for the artillery school. On occasion he vowed in public to overthrow the ROC government by force, through an armed coup d'état as an army officer. The same year his girlfriend gave birth to a daughter when he was 19.[1]

In 1962 he was arrested for alleged involvement in the "Taiwan Independence League", over 30 more "accomplices", mostly army officer school and university students, were also arrested. Shih's two brothers, poet and painter Shih Ming-cheng and medical school student Shih Ming-hsiung were among them.

In 1964 Shih Ming-te is sentenced to life imprisonment for orchestrating the independence movement, he was also stripped-off his civil rights for life. Shih was severely injured during interrogation, he lost all his teeth and his spine was damaged, consequently, he has been using dental prosthetics and suffering from back pain since he was 22.

The Kuomintang considered Shih as highly dangerous and therefore prevented him from doing any forced labor that would put him in contact with the world outside prison. This gave him enough time to do research and study. Shih focused on philosophy, history, international law, linguistics and Japanese. He also developed a strong and resolute personality in prison.

In the 1970s, Taiwan government suffered several blows to its international status: first, its seat at the United Nations was taken over by the People's Republic of China, then the United States established official ties with Beijing, severing those with Taipei. A rebellion in the Taiyuan prison, where many of the inmates were political prisoners, was planned. Access to the Taitung radio station and a publicly broadcast a declaration of Taiwan's independence from China was one of their goals. Many all pro-independence prisoners took part in the plot. On February 8, 1970 five prisoners murdered a guard and tried to take his gun. Ultimately the five inmates broke from prison, only to be caught promptly. The breakout plot was foiled.

The Kuomintang believed Shih was one of the masterminds of the uprising, therefore kept him in isolation during his time in Taiyuan. To this date, the investigation documents are still kept confidential and the implication of Shih is disputed by Shih himself, who sued Lin Shu-chi for defamation.

In 1974, after 12 years of imprisonment, Shih's first wife Chen Li-chu asked for divorce: she had an affair with one of Shih's friends. In 1975 Chiang Kai-shek died; a sentence-reduction policy is carried out. On June 16, 1977, Shih is released after only 15 years in prison serving a life sentence.

During the Chiang's last years, an authoritarian rule similar to Today's Communist Chinese government policy was imposed on Taiwan: there was no other opposing political parties may be granted. Shih Ming-te, created a "party without a name" amidst the absence of freedom of association in Taiwan at that time. On September 1978 Shih becomes the convener of the Tangwai or non-Kuomintang candidates. On May 1979 this group of non-Kuomintang activists established the Meilitao Magazine, Shih was named general manager. On December 10, 1979, this Tangwai group commemorates Human Rights Day in Kaohsiung. The rally operated without prior approval with specific stipulation that no torches and weapons were allowed. It was interrupted by police forces, which clashed with the protestors. The event will be known as the Meilitao Incident, a milestone in Taiwan's democratization process.[2]

Three days later, Shih dramatically escapes: Chang Wen-ying (then a dentist and later Mayor of Taichung City) performs plastic surgery on Shih to change his looks. Shih was still caught along with the dentist sentenced to life in prison for the second time.

During the 1980 Meilitao Incident trials Shih is defiant and proud facing a potentially fatal Court Martial decision. He declares during his defense: "Taiwan should be independent, in fact, it already is, it has been for 30 years and currently it is known as Republic of China". Shih also demands an end to the political monopoly by the Kuomintang, the press control in Taiwan and the martial law, so that the 30-plus-year rubber stamped legislative session can be dissolved. 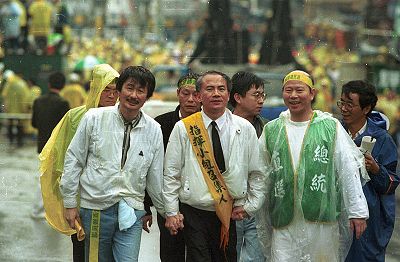 Shih Ming-te often says: "I have been locked up for 25 years, where were you then?"[citation needed].

Taking a look at 40 years of his struggle for Taiwan's democracy, he reveals himself as a visionary; he made several pioneering proposals ahead of his time.

20 years ago Shih already said the four evils of Taiwan's path towards democracy were the political monopoly by the Kuomintang, the press control in Taiwan, the martial law and the "ten thousand year" legislative session. Risking death penalty, Shih advocated for a "Republic of China, Taiwanese Independence Model", and added that "Taiwan is already an independent country, it has been so for over 30 years". For his opinions, Shih was considered seditious and the media, organizations, academia, everyone attacked him and humiliated him, only for the Democratic Progressive Party to adopt and implement his ideas; they even led the way to Lee Teng-hui's "Silent Revolution" political compromises. When the Kuomintang's 50 years in power ended, the Chen Shui-bian administration accepted some of his teachings.