The terms international waters or trans-boundary waters apply where any of the following types of bodies of water (or their drainage basins) transcend international boundaries: oceans, large marine ecosystems, enclosed or semi-enclosed regional seas and estuaries, rivers, lakes, groundwater systems (aquifers), and wetlands.[1]

Oceans, seas, and waters outside of national jurisdiction are also referred to as the high seas or, in Latin, mare liberum (meaning free seas).

Ships sailing the high seas are generally under the jurisdiction of the flag state;[2] (if there is one) however, when a ship is involved in certain criminal acts, such as piracy,[3] any nation can exercise jurisdiction under the doctrine of universal jurisdiction. 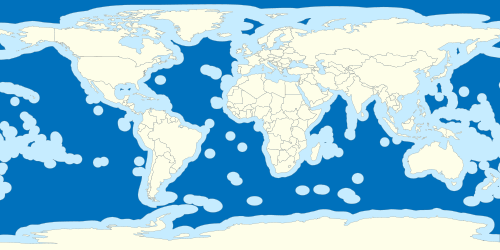 Areas outside of exclusive economic zones in dark blue. 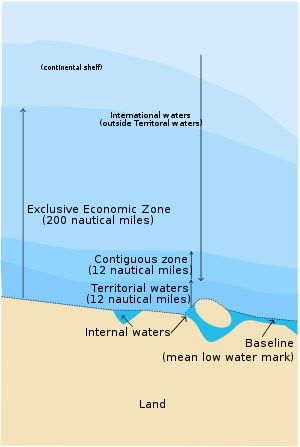 Current unresolved disputes over whether particular waters are "International waters" include:

In addition to formal disputes, the government of Somalia exercises little control de facto over Somali territorial waters. Consequently, much piracy, illegal dumping of waste and fishing without permit has occurred.

At least ten conventions are included within the Regional Seas Program of UNEP,[12] including: