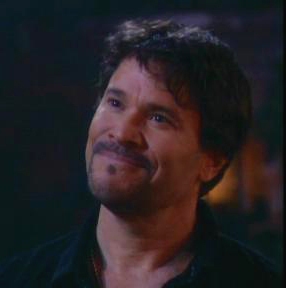 Bo, arguably the show's primary male hero, began his tenure as the stereotypical "bad boy with a heart of gold" and grew to become a brave and noble police detective, romantic and loving husband and doting father of four. Along with his wife Hope, Bo has been a mainstay for over twenty years, and while his wild youthful days may be behind him, he has not stopped saving the day. Though not a Brady by blood, his passion and heart helps him protect and lead his family through their constant struggles with the menace of the DiMeras and all other problems, natural and supernatural, that come their way.

Bo Brady stormed into Salem with his motorbike and leather jacket. He immediately fell for upper-class girl Hope Williams. Too bad she was engaged to Larry Welch. They admitted their feelings for each other, but out of a sense of duty, she married Larry. Soon after, they divorced, and Hope and Bo married in a regal ceremony given to them by the English royalty.

He learned that Victor Kiriakis, crime boss extraordinaire, was his natural father. He had been born of a torrid affair between his mother and Victor. Victor tried his best to change his son, but to no avail. It didn’t work. Soon after, Bo did something to infuriate his new found father, and Victor denounced his son, even having a fake paper drawn up saying Bo was not his son. Hope miscarried their first child while they lived in the Kiriakis mansion. She became pregnant again, and Shawn Douglas was born. They set sail around the world not long after.

Three years later, Bo got involved with Ernesto Toscano’s dealings. Hope got involved also. She died in an explosion, and so did Ernesto. No body was ever found, but everyone around Bo reasoned with the man who wouldn’t believe it was true... no one could ever survive that explosion. Bo, heartbroken returned to Salem to restart his life.

After some healing time, he got involved with Dr. Carly Manning, who had some secrets of her own. She had a son with "Sleazy Larry" Lawrence Alamain, who she had thought had died. That was not the case. Although she and Bo tried to go down the altar, something always stopped them. When Carly was presumed dead, she was actually re-living her youthful love with Lawrence. Their old romance rekindled, Carly and Lawrence returned to Switzerland. Bo was left again, only Billie Reed was there to pick up the pieces of his heart.

After a winding engagement, starting with her not telling him about her father’s sexual abuse towards her and the return of his presumed dead wife Hope, Billie and Bo got married. Only he couldn’t fight the feelings he had for the mother of his son. Billie returned to Paris after granting him a divorce. Hope and Bo, after many years apart, explored their feelings for each other and were engaged. On their wedding day, Bo got frozen by falling in cold water, and trying to conserve body heat, Billie undressed Bo and laid in bed with him. Hope walked in, looking for her husband-to-be-again, and saw them like this. She thought they had made love, and cancelled the wedding.

Billie and Bo became involved in a drug smuggling case in Salem, after Shawn D had gotten shot by drug dealers. J.L. King, in order to test Bo’s loyalty to the drug ring, made Billie and Bo get married. Hope, by a strange turn of events, became bridesmaid, and slimy Franco Kelly, the best man. She fainted at the wedding. Bo, beginning to think Hope didn’t love him anymore, consummated his marriage to Billie and she got pregnant with their daughter Georgia, who she gave birth to prematurely in the Bayou. But Billie, out of spite for Hope, blamed it on an argument they had had earlier, and Hope was left with an enormous amount of guilt, keeping Hope and Bo apart.

Bo then got interested in Hope’s past, but she refused to participate in the search with him. He went to the Bayou again where he met Swamp Girl, a scarred girl who knew some secrets about Hope’s past. She knew quite a few. She was the person who had taken Hope’s place in the cage at Ernesto’s. She was scared, and Hope was taken to safety by Stefano. Bo returned with Swamp Girl (AKA. Princess Greta) to Salem, who was afraid of civilization because of her scars. Hope had been transformed into Princess Gina, but no one knew this, although Greta had a sense that her mother was around when Hope was. Bo was treading on dangerous territory.

Bo didn't catch on to the truth about Hope's dual identity until after the real Hope had been kidnapped, and Gina had taken her place. He was horrified when 'Hope' shot their son Shawn, but it was the impetus needed for Bo and everyone else in Salem to learn the truth. After rescuing Hope and Stefano from their imprisonment, Bo returned to town with Hope, who was very, very pregnant with a child Bo knew could not be his. They were married in June 2000 while Hope prepared to give birth to a baby boy, and renewed their vows again later in 2000. Bo was devastated to think that the baby boy he loved, J.T., was really John Black's child, but his love for Hope was too strong to break them up.

Bo and Hope were also devastated when they learned that their child was switched at birth with the child Lexie adopted, and that the father of the baby boy they had been raising was fighting for custody of his son. They fought to keep J.T., and also fought to take Isaac from Abe and Lexie. Their plan was to raise the two boys. They lost custody of J.T. to his natural father, but luckily Abe relinquished custody of Isaac to Bo and Hope. Rather than cause the boy serious issues by changing his name mid-stream, they simply shortened it to Zack.

Bo faced possible heartbreak when Hope was kidnapped, and Lexie was the prime suspect, but it turned out that Larry Welch (Hope's former love who went to prison) had kidnapped Hope. They were trying to get their life back on track and Bo quit the force so he and Hope could become bounty hunters. When things started going bad for the Salem PD, Bo and Hope were both reinstated as police officers, and focused all their energies on the Salem Stalker serial killings.

Roman and Bo both begged Caroline to tell them where she was the night Maggie died, and to explain her prints on the bottle used to bludgeon her. She refused to, and unfortunately, she was poisoned not long after. The entire Brady family was devastated by her death. Part of Bo refused to accept not only Caroline's death but also Roman's death at his own wedding just weeks later, and when news came that the Salemites might be alive, he was desperate to believe it. Thanks to Roman's efforts to send a message, Bo was able to track down the survivors and reunite with his lost family members and even his former wife Billie until, again, his father and mother were presumed deceased.

After getting back to Salem, Bo and Hope began putting their lives back together. Just as they were starting to get everything settled down again and beginning to work on the problems with their son Shawn and his new girlfriend Jan, Bo and Billie learned that their daughter, Georgia, was alive and well. Bo and Billie began searching for the teenager, and learned that she had been adopted and was living right in Salem. When the search for Georgia stagnated, Bo concentrated on patching up his marriage with Hope (which had hit the skids when he and Billie were looking for Georgia), and bought a new boat for her, the Fancy Face III.

Bo and Billie eventually learned that Chelsea Benson was their daughter, and immediately Bo found himself caught between Chelsea and Hope because Chelsea kept asking for money and Bo felt so guilty about not being there for her growing up he would give her the money even though he and Hope really couldn't afford it. He helped Chelsea get out of trouble a few times, but finally put his foot down before Christmas and she lost her driver's license. He arranged for her to have driver's lessons, and when she told him how great her instructor said she was, he agreed to let her have the car on New Year's Eve. Unfortunately, Chelsea wasn't paying attention and accidentally hit young Zack Brady, who was at a sleepover. Bo was devastated to learn that his daughter killed his son and broke down in tears in the hospital elevator when that was discovered.

Bo and Hope were unable to reconcile after Hope learned that he was responsible for Chelsea having the car that night, and the two separated. When Hope learned she was pregnant, Bo was devastated when paternity tests proved that Patrick Lockhart was the father of her unborn baby, but he was still determined to be part of Hope's life. Despite numerous warnings that he was going too far in his quest to bring Patrick down, Bo continued his investigations, and was briefly kicked off the force as a result. It all proved to be worth it to him when Patrick confessed, as Hope was giving birth in a warehouse, that the baby was actually his. Weeks later, Bo and Hope finally chose a name for their newest daughter -- Ciara Alice Brady.