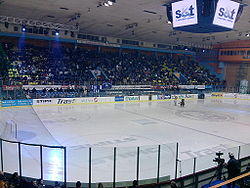 Dom Sportova is an indoor sporting arena, located in Zagreb, Croatia. The venue was built in 1972, on Trešnjevka, in the western part of the city. It has 32,000 m² of floorspace, and it features six halls. The seating capacity of the biggest two is 3,100 and 6,400.

It is used for basketball, handball, volleyball, ice hockey, gymnastics, tennis, as well as concerts.

It is the venue for the PBZ Zagreb Indoors men's tennis tournament.

It also hosted The Final tournament of the 1989 European Basketball Championships[2], in which the home team of Yugoslavia won the Gold medal, and the 2008 European Figure Skating Championships.

The arena is home to Croatia's most successful hockey team KHL Medveščak Zagreb.