The Battle of Ceuta (August 14, 1415) and the subsequent conquest of the Wattasid city of Ceuta by the Portuguese had its roots in the earliest years of the House of Aviz dynasty of Portugal. Both the Battle of Ceuta and, in a larger sense, the era of European expansion were influenced by the Infant Dom Henrique of Portugal; he is better known to history as Prince Henry the Navigator.

Born in 1394, Henry was the third son of King João I and his Queen Philippa, who were monarchs from the House of Aviz. He and his brothers lived in an era where honour was as much earned as inherited; the medieval concept of chivalry still held sway in European courts. Given this worldview, it is not surprising that João I led his sons and their assembled forces in an attack on the Muslim stronghold of Ceuta in 1415. This "baptism of blood" was a traditional manner by which nobles proved their valor. In addition, the expedition fed the crusading spirit of the warriors, as there was no greater glory for Iberian Christians of the Reconquista than that attained through the defeat of Moorish forces.

The Portuguese conquest of Ceuta served larger purposes than simply winning knightly spurs for the sons of João I; their victory over the forces of Islam rekindled dreams of a unified Christendom that could subdue Islam in a multi-pronged conflict. The prospect of a triumphant military and religious unification with distant Christian empires thus increased in its attraction to European leaders. 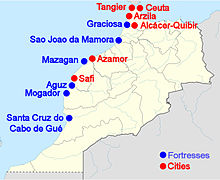 The battle itself was almost anti-climactic, because the 45,000 men who traveled on 200 Portuguese ships caught the defenders of Ceuta off guard. An attack that commenced on the morning of August 14, 1415 ended with the capture of the town by nightfall. Prince Henry distinguished himself in the battle, being wounded during the conquest of the city that was known as the “Key to the Mediterranean.”

Thus, one of the major northern trade centers of the Islamic world was now in the possession of Portugal. This African conquest was the first significant ripple of a wave of European expansion that would reach every continent on the globe.

Arkan Simaan L'Écuyer d'Henri le Navigateur, Éditions l'Harmattan, Paris. 2007. Historical novel based on medieval Zurara’s chronicles. It tells us the conquest of Ceuta in 1415 by king John I and his sons and its occupation. Written in French. ISBN : 978-2-296-03687-1