The Light Armoured Car (Aust), also known as Rover, was an armoured car produced in Australia during the Second World War.

At the outbreak of World War II the United Kingdom was unable to meet the needs of the Commonwealth for armored fighting vehicles. It led many Commonwealth countries to develop their own AFVs. 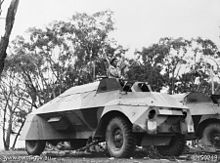 The Rover was designed in 1941. It utilized Ford 3-ton CMP truck chassis, either F60L or shorter F60S. The armoured bodies were produced by Ruskin Motor Bodies Pty Ltd of Melbourne. The production was stopped in 1943, a total of 238 cars were built.

The Rover entered service with the Australian army in April 1942. It never saw combat and was used mostly for crew training. A long narrow opening at the top of the hull earned the vehicle a nickname mobile slit trench. Late in 1943 Australia started to receive US-made armoured cars and the Rover was soon declared obsolete.

There are two restored Rover Mk II cars on display in Australian museums, at the National Military Vehicle Museum in Port Adelaide and at the Royal Australian Armoured Corps Tank Museum at Puckapunyal, Victoria.