Konstantinos Simitis (Greek: Κωνσταντίνος Σημίτης) (born 23 June 1936), usually referred to as Costas Simitis or Kostas Simitis, was Prime Minister of Greece and leader of the Panhellenic Socialist Movement (PASOK) from 1996 to 2004.

Costas Simitis' family has roots in Ilida (municipality).[citation needed] Ηe was born in Piraeus to Georgios Simitis, a Professor at the School of Economic and Commercial Sciences, and to his wife Fani (née Christopoulou). He studied Law at the University of Marburg in Germany and economics at the London School of Economics. He is married to Daphne Arkadiou (b. 1938)and has two daughters, Fiona and Marilena. His brother Spiros Simitis is a prominent jurist specializing on data privacy in Germany. He currently resides in the Kolonaki district of Athens.

In 1965 he returned to Greece and was one of the founders of the "Alexandros Papanastasiou" political research group . In 1967, after the military coup of 21 April, this group was transformed into Democratic Defense, an organization opposed to the military regime. Simitis escaped abroad after planting bombs in the streets of Athens (in later years he acknowledged his activities on Greek MEGA TV channel) in order to avoid being jailed and became a member of the Panhellenic Liberation Movement (PAK), led by Andreas Papandreou. He also took up a position as university lecturer in Germany. He returned to Athens in 1974 and was one of the co-founders of PAK's successor, the PASOK. In 1977 he took up a lecturer's post at the Panteion University.

Simitis was not a candidate for the Greek Parliament in the 1981 elections, but he was appointed Minister of Agriculture in the first PASOK government of that year. Following the 1985 elections and his election as a deputy to the Parliament, he became Minister of National Economy; he undertook an unpopular stabilization program, trying to curb inflation and reduce deficits, but resigned his post in 1987 because he felt that his policies were being undermined. In 1993 he took over the Ministry of Commerce and Industry, but in 1995 he again resigned from the ministry and the party's Executive Bureau following a public rebuke he received by Prime Minister Papandreou.

Rise to the offices of Prime Minister and President of PASOK

On 16 January 1996 Papandreou resigned as Prime Minister due to ill health. In a special election held by the party's parliamentary group on 18 January, Simitis was elected in his place, over the candidacies of Akis Tsochatzopoulos, Gerasimos Arsenis and Ioannis Charalampopoulos. Papandreou however remained Chairman of the party for the next months until his death on 23 June, just before a party conference would select the party's vice-president; after Papandreou's death, the conference would elect the new Party President. Simitis was elected in PASOK's Fourth Congress on 30 June, defeating Akis Tsochatzopoulos on a platform of support for the European Union.

Simitis then led the party in the national elections of 22 September 1996, gaining a mandate in his own right. He also narrowly won the national election of 2000. Although he is widely respected throughout Europe, in Greece Simitis was regarded by some Greeks as a rather dull technocrat, lacking the charisma of Papandreou.

On 7 January 2004, with PASOK's popularity collapsing, Simitis announced that he would resign as party president and would not stand for re-election a Prime Minister in the forthcoming legislative elections. At the time he was accused of bowing out to avoid humiliation at the polls. However, by the end of his tenure on 10 March, he would be in office for over 8 consecutive years, the longest continuous term in modern Greek history. In a past interview Simitis had already stated that he would remain prime minister for only 2 legislative periods, since "he wanted to do other things in his life as well". On 8 January he called elections for the position of party president to be held on 8 February. Simitis was succeeded as PASOK leader by then-Minister of Foreign Affairs George Papandreou, the only candidate in these elections. Despite Papandreou's personal popularity, PASOK lost the March 7 elections to the conservative New Democracy party, whose leader Kostas Karamanlis succeeded Simitis in the office of Prime Minister.

Simitis is largely known in Greece for his political philosophy which is known as Eksynchronismos ("modernization") which focuses on extensive public investment and infrastructure works as well as economic and labor reforms. Simitis is credited by his supporters with overcoming chronic problems of the Greek economy and thus achieving the admittance of Greece into the Eurozone. During the period of his governance, official data presented inflation as having decreased from 15% to 3%, public deficits diminished from 14% to 3%, GDP increasing at an annual average of 4% and factual labor incomes having increased at a rate of 3% per year. However, the macroeconomic data presented by Simitis' government were called into question by an audit performed by the successor government of New Democracy in 2004. Eurostat concluded in 2006 that the public deficit of the Greek economy amounted to 6,1% in 2003, more than double the percentage presented by Simitis' government.[1] The results of the audit concluded that the PASOK administration used different accounting methods, especially for calculating the military expenses during its term. The government of New Democracy used the revised data as a means to criticize the previous government for incompetent economic policy and a falsification of an economic indicator, namely the public deficit, which among other criteria was used as a basis on which Greece was accepted into the Eurozone. PASOK contested the accusations and claimed that 2006 Eurostat changes to the system of defense expenditure calculation [2] legitimized the practices of the Simitis government. New Democracy responded that the defense expenditures covered by those changes constituted only a small part of much more substantial expenditures that were fraudulently concealed by the PASOK government. Whether Simitis' government conducted any unconventional handling of Greek fiscal data continues to be a hotly contested issue between the two political parties. 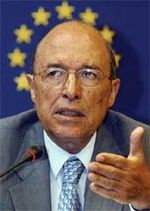 A major issue during Simitis' tenure concerned corruption, which has become endemic in Greek public life. Simitis rejected New Democracy's bills for accountability and transparency with regards to governmental expenditure and decisions [3], and New Democracy leader Kostas Karamanlis accused Simitis during a parliamentary plenum of being an "archpriest of cronyism", referencing the index of the NGO Transparency International. However, Greece's position has fallen by 5 places[citation needed] in the same index during the New Democracy government. Four years later Karamanlis himself admitted that he exaggerated and that he never doubted Simitis' honesty [4].

Many large-scale infrastructure projects were carried out or begun during the so-called 'era of Eksychronismos', such as the new "Eleftherios Venizelos" Athens International Airport, the Rio-Antirio bridge, the Athens Metro, or the Egnatia Odos.

In 1996, the appointment of the PASOK-leaning "To Vima" newspaper editor, Stavros Psycharis, as political administrator of Mount Athos was particularly criticised by the opposition [5]. In 2000, Simitis was embroiled in a dispute with the Archbishop of the influential Greek Orthodox Church, Christodoulos, when the Greek government sought to remove the "Religion" field from the national ID cards carried by Greek citizens on the grounds that the Hellenic Data Protection Authority (HDPA) recommended so; its decision also included the "Nationality" field, but was not implemented following a subsequent EE directive to the contrary. Christodoulos opposed the decision, claiming that the action pursued deviously the religious de-identification of the Greek nation. Faced by the government's robust but unpopular stance, he organised two massive demonstrations in Athens and Thessaloniki, alongside a majority of bishops of the Church of Greece. The attitude of Simitis gained faint-hearted support even within his party, but found a surprisingly militant ally in the small Left Coalition party echoing the Eksychronismos opinion makers.The then-opposition leader signed a petition, organized by the Church of Greece, calling for a referendum on the matter and signed, too, by more than three million citizens. However, the inclusion of religious beliefs on ID cards, even on a voluntary basis, as the Church had asked, was subsequently subsided, with its supporters' contribution, to appease extra tensions in the country. 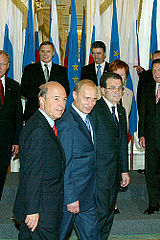 While PASOK traditionalists disliked his move away from more orthodox norms of Democratic socialism, and also his relative moderation on issues such as the Cyprus dispute and the Macedonia naming dispute, his supporters saw both of these as positive elements of the eksynchronismos movement that Simitis was seen as spearheading.

During January–June 2003, Simitis, as Greek Prime Minister, exercised the presidency of the European Council.

Simitis has authored several books and articles on legal and economic issues as well as on politics.