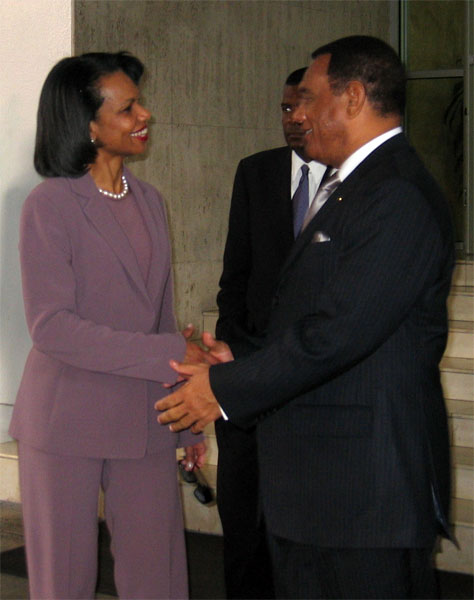 Perry Gladstone Christie (born , ) is a Bahamian politician who served as the third from 2002 to 2007. He is also a former athlete.

Perry Gladstone Christie was sworn in as the third Prime Minister of an independent Bahamas on , , following his 's triumph over the Free National Movement in a general election a day earlier. Official returns gave the former Opposition Leader's party 29 of the 40 House of Assembly seats that were at stake. The FNM, which had governed The Bahamas for nearly a decade under , won seven seats.

Christie characterizes his party as "a PLP that will not only build new hospitals, schools, bridges and roads, but a PLP that will build up patriotism, pride, optimism and hope. These values must be brought to full flowering; otherwise, we labour in vain." Victorious in the newly created Farm Road constituency in the general election, he was appointed Leader of the Opposition by the Governor-General on , . He had been elected leader of the PLP at a special convention on April 05 1997. Christie thus succeeded the late Rt. Hon. Sir Lynden Oscar Pindling, M.P., who had led the PLP since 1956 as both Leader of the Opposition and leader of the party.

Christie, who was re-elected to the House of Assembly in the March 14, 1997, general election, defeated Dr. Bernard J. Nottage and Mr. Philip C. Galanis, both former M.P.s, in a poll for party leader. Born in Nassau August 21, 1943, Christie is the eldest son of cab driver Gladstone L. Christie and Nurse Naomi Christie, both of whom are deceased. He attended the Eastern Senior School in New Providence, the University Tutorial College, London, Inner Temple and Birmingham University, from which he graduated with honours in 1969.

Christie, an attorney-at-law, is believed to have been the youngest Bahamian ever appointed to the Senate. Named Senator by in November, 1974, Christie served in that capacity until June, 1977. In January of the latter year he was appointed chairman of the Gaming Board, which regulates casinos in The Bahamas. Receiving the PLP's nomination for the Centreville constituency in the 1977 general election, Christie was elected Member of Parliament for that constituency, and shortly after appointed Minister of Health and National Insurance. During the June, 1982, general , he was re-elected Member of Parliament for Centreville, and was once again appointed to the Prime Minister's Cabinet, but as Minister of . Christie moved tourism in to new heights. In 1984, however, he was dismissed from the Cabinet, and during the 1987 general election ran as an independent candidate. He retained his seat in the Centreville constituency. Three years later - in March, 1990 - Christie returned to the fold of the , and was appointed Minister of Agriculture, Trade and Industry by the Prime Minister. Christie's ministerial responsibilities included the Ministry of Agriculture, Trade and Industry; mining, geological surveys, petroleum, fuel, oils and petrochemicals, industries encouragement, manufacturing, relations with The Bahamas Agricultural and Industrial Corporation, relations with The Bahamas National Trust, reef and blue holes, and the Department of Agriculture, Fisheries and Co-operatives.

In January, 1993, following the PLP's defeat in the August, 1992, general election, Christie was elected Co-deputy leader of the PLP with responsibility for party activities outside parliament. He is a founding member of the Valley Boys, an organisation noted for its entries in the annual Bahamian Junkanoo parades, and of the Pioneers Sporting Club. Christie's athletic skills developed as a member of the Pioneers, and led to his representing The Bahamas at the 1960 West Indies Federation Games in Kingston, Jamaica, and at the Central American and Caribbean Games in Kingston in 1962, when he won a bronze medal in the triple jump.

An , Christie is married to the former Bernadette Joan Hanna, chartered accountant and attorney-at-law. They have two sons, Steffan and Adam, and a daughter, Alexandra.

Economically, Christie's instituted schema focuses on Anchor Developments for the Remote Family Islands--as was charted in his 2002 general election campaign. Hallmarks of this economic initiative include major hotel and resort developments, which serve to progress the country's top industry, "tourism". His planning for investment -with assistance from key Cabinet Ministers - (along with creating the Ministry of Financial Services and Investments) has done much to change the dynamics of the countries investment policy, and has created serious intellectual debate amongst true economists and local businessmen alike. The new ministry has been consistent with finding new strategic alternatives for the Bahamian and international investor, in spite of coming off of the heels of a major financial crisis in 2000, precipitated by tougher banking policies handed down from the .

The Anchor Development policy was severely criticized by several out-island groups, including the inhabitants of , and other Family Islands, who criticized the policy on environmental, cultural and economic grounds.

Regardless of these achievements, Prime Minister Christie's administration suffered severe scandals. The most notable of these originate from rape charges pressed against one of his top level Cabinet ministers to victimization and abuse of power charges alleged against a lower level Cabinet minister. No formal reprimand or removal of any official came as a result of these allegations. This with rumors of his poor health and him suffering a mild stroke in mid 2005 that left him unable to fulfill his duties in full capacity for several weeks.

The PLP was defeated in the May 2007 general election, taking 18 seats against 23 for the FNM, and Christie conceded defeat in a phone call to FNM leader Ingraham. [ [http://news.bbc.co.uk/2/hi/americas/6618421.stm "Bahamas government ousted in poll"] , BBC News, May 3, 2007.] After the new FNM government was sworn in, Christie was sworn in as leader of the Official Opposition. [Stephen Gay, [http://www.jonesbahamas.com/?c=45&a=12515 "Christie Sworn In As Leader of Official Opposition; Appeals For National Healing"] , "The Bahama Journal", May 9, 2007.]

Christie is currently the longest serving member of the Bahamian Parliament, having been re-elected in every election he was entered after his ascension from the Bahamian Senate, where he started his political career.

Christie is married to Bernadette Christie, a . The couple has three children, a daughter Alexandra, and two sons Steffan and Adam.