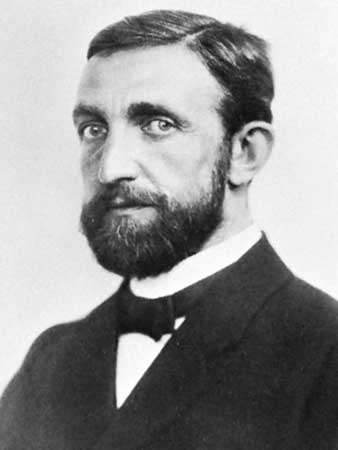 Philipp Eduard Anton von Lénárd (, &ndash; , ) was a German physicist and the winner of the in 1905 for his research on s and the discovery of many of their properties. He was also an active proponent of .

His early work included studies of and and the conductivity of flames.

As a physicist, Lenard's major contributions were in the study of , which he began in 1888. Prior to his work, cathode rays were produced in primitive tubes which are partially evacuated glass tubes that have metallic electrodes in them, across which a high voltage can be placed. Cathode rays were difficult to study because they were inside sealed glass tubes, difficult to access, and because the rays were in the presence of air molecules. Lenard overcame these problems by devising a method of making small metallic windows in the glass that were thick enough to be able to withstand the pressure differences, but thin enough to allow passage of the rays. Having made a window for the rays, he could pass them out into the laboratory, or, alternatively, into another chamber that was completely evacuated. He was able to conveniently detect the rays and measure their intensity by means of paper sheets coated with phosphorescent materials. [cite journal | author=Philipp Lenard | title=Ueber Kathodenstrahlen in Gasen von atmosphärischem Druck und im äussersten Vacuum | journal=Annalen der Physik | volume=287 | issue=2 | pages=225–267 | year=1894 | doi=10.1002/andp.18942870202] These windows have come to be known as "Lenard windows".

Lenard observed that the absorption of the rays was, to first order, proportional to the density of the material they were made to pass through. This appeared to contradict the idea that they were some sort of electromagnetic radiation. He also showed that the rays could pass through some inches of air of a normal density, and appeared to be scattered by it, implying that they must be particles that were even smaller than the molecules in air. He confirmed some of 's work, which ultimately arrived at the understanding that cathode rays were streams of energetic electrons. In conjunction with his and other earlier experiments on the absorption of the rays in metals, the general realization that electrons were constituent parts of the atom enabled Lenard to claim correctly that for the most part atoms consist of empty space.

As a result of his investigations, he showed that the rays produced by radiating metals in a vacuum with ultraviolet light were similar in many respects to cathode rays. His most important observations were that the energy of the rays was independent of the light intensity, but was greater for shorter wavelengths of light.

These latter observations were explained by as a quantum effect. This theory predicted that the plot of the cathode ray energy versus the frequency would be a straight line with a slope equal to Planck's constant, h. This was shown to be the case some years later. The photo-electric quantum theory was the work cited when Einstein was awarded the Nobel Prize in Physics. This much embittered Lenard, who became a prominent skeptic of relativity and of Einstein's theories generally.

Lenard was the first person to study what has been termed the "Lenard effect" in 1892. This is the separation of electric charges accompanying the aerodynamic breakup of water drops. It is also known as "spray electrification" or the "waterfall effect". [ [http://amsglossary.allenpress.com/glossary/search?id=lenard-effect1 American Meteorological Society Glossary] ]

He conducted studies on the size and shape distributions of raindrops and constructed a novel in which water droplets of various sizes could be held stationary for a few seconds. He was the first to recognize that large raindrops are not tear-shaped, but are rather shaped something like a hamburger bun. [ [http://hypertextbook.com/facts/2001/IgorVolynets.shtml Diameter of a Raindrop - the Physics Handbook] ]

Lenard is remembered today as a strong German who despised English physics, which he considered as having stolen their ideas from Germany. He joined the National Socialist Party before it became politically necessary or popular to do so. During the Nazi regime, he was the outspoken proponent of the idea that Germany should rely on "" and ignore what he considered the fallacious and deliberately misleading ideas of "Jewish physics", by which he meant chiefly the theories of , including "the Jewish fraud" of relativity. An advisor to , Lenard became Chief of Physics under the Nazis.

Lenard retired from as professor of theoretical physics in 1931. He achieved emeritus status there, but he was expelled from his post by Allied occupation forces in 1945 when he was 83. He died in 1947 in .