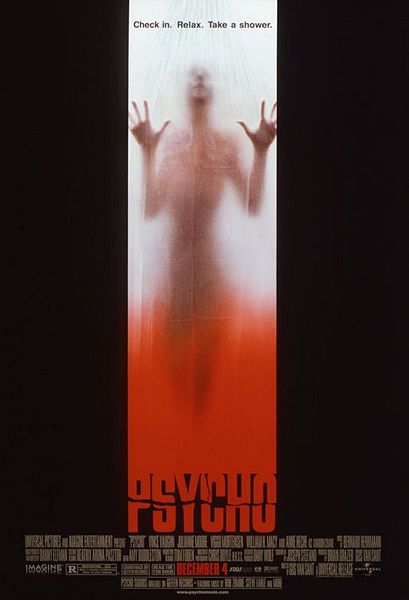 "Psycho" is a 1998 film of the 1960 version produced and directed by for . Both films are based on the novel of the same name by , which were in turn inspired by the crimes of .

Although this version is in color and features a different cast, it is nearly a shot for shot remake that copies Hitchcock's camera movements and editing. A few changes are introduced to account for advancements in technology since the original film and to make the content more explicit. Murder sequences are also intercut with surreal dream images.

plays Marion Crane, with as , as Milton Arbogast, as Sam Loomis, and as Lila Crane. Small roles go to as Dr. Fred Simon, as Sheriff Al Chambers, as Mrs. Eliza Chambers, as Caroline, and Michael Balzary (aka Flea from the Red Hot Chili Peppers) as Bob Summerfield. While in the original, had a cameo as a man in a cowboy hat outside the bank, director Gus Van Sant has a cameo talking to the man in the new version's parallel shot.

The film's soundtrack, "", included 's re-recordings of some of 's score for the original film, along with a collection of songs in genres from country to , connected mainly by titles containing "psycho" or other death or insanity-related words. Many of the songs were recorded specifically for the soundtrack, to the extent that a number of them sample Herrmann's score as well.

This version of "Psycho" received negative reviews and was awarded two , for Worst Remake or Sequel and Worst Director (Van Sant).

A number of critics and writers viewed Van Sant's version more as an actual experiment in remakes. Film critic wrote that the film "demonstrates that a shot-by-shot remake is pointless; genius apparently resides between or beneath the shots, or in chemistry that cannot be timed or counted". [cite news | url=http://rogerebert.suntimes.com/apps/pbcs.dll/article?AID=/19981206/REVIEWS/812060301/1023 | title=Review of Psycho (1998 film) | first=Roger | last=Ebert | date=1998-12-06 | accessdate=2007-11-03] Screenwriter , who worked on the 1960 version, thought that although she spoke the same lines, Anne Heche portrays Marion Crane as an entirely different character. [cite news | title=Psycho Analysis: An Interview With Screenwriter Joseph Stefano | url=http://www.austinchronicle.com/gyrobase/Issue/story?oid=oid%3A74285 | publisher= | date=1999-10-15 | accessdate=2007-11-03] Even Van Sant admitted that it was an experiment that proved that no one can really copy a film exactly the same way as the original. [cite news | title=The odd world of Gus Van Sant | url=http://www.iht.com/articles/2005/07/14/news/gus.php | publisher= | date=2005-07-15 | accessdate=2007-11-03]