For introductory details to this topic, including terminology and ω-3 / ω-6 nomenclature, see the main articles at Essential fatty acid and Eicosanoid.

The actions of the ω-3 (Omega-3) and ω-6 (Omega-6) essential fatty acids (EFAs) are best characterized by their interactions; they cannot be understood separately.

Arachidonic acid (AA) is a 20-carbon ω-6 conditionally essential fatty acid.[1] It sits at the head of the "arachidonic acid cascade" – more than twenty different signalling paths that control a wide array of bodily functions, but especially those functions involving inflammation and the central nervous system.[2] Most AA in the human body derives from dietary linoleic acid (another essential fatty acid, 18:2 ω-6), which comes both from vegetable oils and animal fats.

In the inflammatory response, two other groups of dietary essential fatty acids form cascades that parallel and compete with the arachidonic acid cascade. EPA (20:5 ω-3) provides the most important competing cascade. It is ingested from oily fish or derived from dietary alpha-linolenic acid found in, for instance, hemp oil and flax oil. DGLA (20:3 ω-6) provides a third, less prominent cascade. It derives from dietary GLA (18:3 ω-6) found in, e.g. borage oil. These two parallel cascades soften the inflammatory effects of AA and its products. Low dietary intake of these less inflammatory essential fatty acids, especially the ω-3s, is associated with a variety of inflammation-related diseases.

Today, the usual diet in industrial countries contains much less ω-3 fatty acids than the diet of a century ago. The diet from a century ago had much less ω-3 than the diet of early hunter-gatherers,.[3] We can also look at the ratio of ω-3 to ω-6 in comparisons of their diets. These changes have been accompanied by increased rates of many diseases – the so-called diseases of civilization – that involve inflammatory processes. There is now very strong evidence [4] that several of these diseases are ameliorated by increasing dietary ω-3, and good evidence for many others. There is also more preliminary evidence showing that dietary ω-3 can ease symptoms in several psychiatric disorders.[5]

For details on the metabolic pathways for eicosanoids in each series, see the main articles for prostaglandins (PG), thromboxanes (TX), prostacyclins (PGI) and leukotrienes (LK).

Eicosanoids are signalling molecules derived from the essential fatty acids (EFA); they are a major pathway by which the EFAs act in the body. There are four classes of eicosanoid and two or three series within each class. Before discussing eicosanoid action, we will explain the series nomenclature.

Cell's outer membranes contain phospholipid fat. Each phospholipid molecule contains two fatty acids. Some of these fatty acids are 20-carbon polyunsaturated essential fatty acids – AA, EPA or DGLA. In response to a variety of inflammatory signals, these EFAs are cleaved out of the phospholipid and released as free fatty acids. Next, the EFA is oxygenated (by either of two pathways), then further modified, yielding the eicosanoids.[6]   Cyclooxygenase (COX) oxidation removes two C=C double bonds, leading to the TX, PG and PGI series. Lipoxygenase oxidation removes no C=C double bonds, and leads to the LK.[7]

The IUPAC and the IUBMB use the equivalent term Icosanoid.[7] 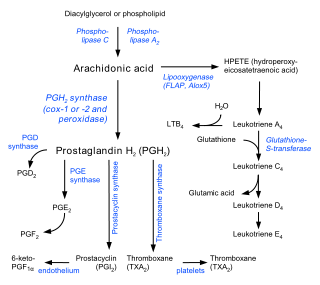 Figure (1) The Arachidonic acid cascade, showing biosynthesis of AA's eicosanoid products. EFA and DGLA compete for the same pathways, moderating the actions of AA and its products.

In the arachidonic acid cascade, dietary linoleic acid (18:2 ω-6) is lengthened and desaturated to form arachidonic acid, esterified into the phospholipid fats in the cell membrane. Next, in response to many inflammatory stimuli, phospholipase is generated and cleaves this fat, releasing AA as a free fatty acid. AA can then be oxygenated and then further modified to form eicosanoids – autocrine and paracrine agents that bind receptors on the cell or its neighbors. Alternatively, AA can diffuse into the cell nucleus and interact with transcription factors to control DNA transcription for cytokines or other hormones. 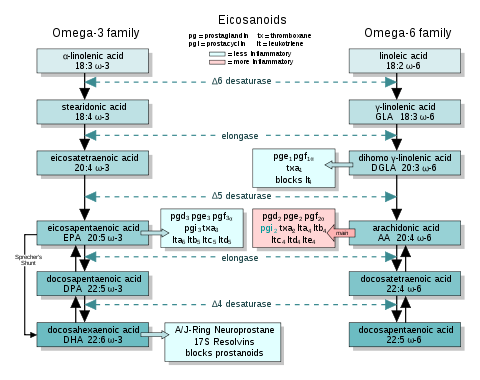 Figure (2) shows the ω-3 and -6 synthesis chains, along with the major eicosanoids from AA, EPA and DGLA.

Dietary ω-3 decreases tissue concentrations of AA. Animal studies show that increased dietary ω-3 results in decreased AA in brain and other tissue,.[11] Linolenic acid (18:3 ω-3) contributes to this by displacing linoleic acid (18:2 ω-6) from the elongase and desaturase enzymes that produce AA. EPA inhibits phospholipase A2's release of AA from cell membrane.[12]   Other mechanisms involving the transport of EFAs may also play a role.

DGLA and EPA compete with AA for access to the cyclooxygenase and lipoxygenase enzymes. So the presence of DGLA and EPA in tissues lowers the output of AA's eicosanoids. For example, dietary GLA increases tissue DGLA and lowers TXB2.[14][15] Likewise, EPA inhibits the production of series-2 PG and TX.[9] Although DGLA forms no LTs, a DGLA derivative blocks the transformation of AA to LTs.[16]

Some DGLA and EPA derived eicosanoids counteract their AA derived counterparts. For example, DGLA yields PGE1, which powerfully counteracts PGE2.[17]   EPA yields the antiaggregatory prostacyclin PGI3 [18] It also yields the leuokotriene LTB5 which vitiates the action of the AA-derived LTB4.[19]

The paradox of dietary GLA

Dietary linoleic acid (LA, 18:2 ω-6) is inflammatory. In the body, LA is desaturated to form GLA (18:3 ω-6), yet dietary GLA is anti-inflammatory. Some observations partially explain this paradox: LA competes with α-linolenic acid, (ALA, 18:3 ω-3) for Δ6-desaturase, and thereby eventually inhibits formation of anti-inflammatory EPA (20:5 ω-3). In contrast, GLA does not compete for Δ6-desaturase. GLA's elongation product DGLA (20:3 ω-6) competes with 20:4 ω-3 for the Δ5-desaturase, and it might be expected that this would make GLA inflammatory, but it is not, perhaps because this step isn't rate-determining. Δ6-desaturase does appear to be the rate-limiting step; 20:4 ω-3 does not significantly accumulate in bodily lipids.

It is likely that some dietary GLA eventually forms AA and contributes to inflammation. Animal studies indicate the effect is small.[15] The empirical observation of GLA's actual effects argues that DGLA's anti-inflammatory effects dominate.[21]

Eicosanoid signaling paths are complex. It is therefore difficult to characterize the action of any particular eicosanoid. For example, PGE2 binds four receptors, dubbed EP1–4. Each is coded by a separate gene, and some exist in multiple isoforms. Each EP receptor in turn couples to a G protein. The EP2, EP4 and one isoform of the EP3 receptors couple to Gs. This increases intracellular cAMP and is anti-inflammatory. EP1 and other EP3 isoforms couple to Gq. This leads to increased intracellular calcium and is pro-inflammatory. Finally, yet another EP3 isoform couples to Gi, which both decreases cAMP and increases calcium. Many immune-system cells express multiple receptors that couple these apparently opposing pathways.[10] Presumably, EPA-derived PGE3 has a somewhat different effect of on this system, but it is not well-characterized.

The arachidonic acid cascade in the central nervous system (CNS)

The arachidonic acid cascade is arguably the most elaborate signaling system neurobiologists have to deal with.

The arachidonic acid cascade proceeds somewhat differently in the brain. Neurohormones, neuromodulators or neurotransmitters act as first messengers. They activate phospholipidase to release AA from neuron cell membranes as a free fatty acid. During its short lifespan, free AA may affect the activity of the neuron's ion channels and protein kinases. Or it may be metabolized to form eicosanoids, epoxyeicosatrienoic acids (EETs), neuroprotectin D or various endocannabinoids (anandamide and its analogs.)

The actions of eicosanoids within the brain are not as well characterized as they are in inflammation. It is theorized that they act within the neuron as second messengers controlling presynaptic inhibition and the activation of protein kinase C. They also act as paracrine mediators, acting across synapses to nearby cells. Although detail on the effects of these signals is scant, (Piomelli, 2000) comments

Neurons in the CNS are organized as interconnected groups of functionally related cells (e.g., in sensory systems). A diffusible factor released from a neuron into the interstitial fluid, and able to interact with membrane receptors on adjacent cells, would be ideally used to "synchronize" the activity of an ensemble of interconnected neural cells. Furthermore, during development and in certain forms of learning, postsynaptic cells may secrete regulatory factors which diffuse back to the presynaptic component, determining its survival as an active terminal, the amplitude of its sprouting, and its efficacy in secreting neurotransmitters—a phenomenon known as retrograde regulation. The participation of arachidonic acid metabolites in retrograde signaling and in other forms of local modulation of neuronal activity has been proposed.

The EPA and DGLA cascades are also present in the brain and their eicosanoid metabolites have been detected. The ways in which these differently affect mental and neural processes are not nearly as well characterized as are the effects in inflammation.

Figure (2) shows one pathway from EPA to DHA; for an alternative, see Sprecher's shunt.

5-LO acts at the fifth carbon from the carboxyl group. Other lipoxygenases—8-LO, 12-LO and 15-LO—make other eicosanoid-like products. To act, 5-LO uses the nuclear-membrane enzyme 5-lipoxygenase-activating protein (FLAP), first to a hydroperoxyeicosatetraenoic acid (HPETE), then to the first leuokotriene, LTA.