Souvenir of Their Visit to America

Souvenir of Their Visit to America 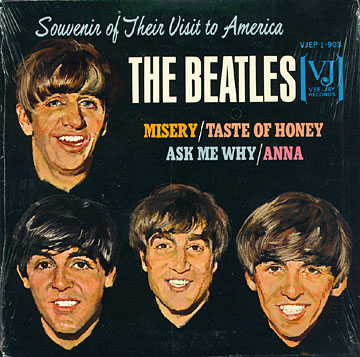 "Souvenir of Their Visit to America" was the first of three Beatles EPs released in the and the only one released by . The EP featured four songs that had previously been released by Vee-Jay on the album. This EP did not chart.

, a unit of and sister label to ' record label , had first refusal rights to any material released by an EMI label. Capitol in the USA repeatedly turned down The Beatles for most of 1963. So The Beatles' first two 1963 singles and an altered version of their first album were released by Vee-Jay Records. Vee-Jay Records was a small company with few resources. As a result of little publicity or promotion, the records sold poorly. Vee-Jay lost the rights to The Beatles for nonpayment of royalites. The smaller received the rights to the single. When The Beatles were booked to perform on the popular Show in February, 1964, Capitol finally exercised its option and said yes to The Beatles in November, 1963. In a legal settlement with Capitol Records, Vee-Jay received rights to market the Beatle recordings they possessed until , 1964 at which point all rights to all EMI Beatle recordings in the United States were assigned to Capitol Records. Vee-Jay's offering, an EP entitled "Souvenir of Their Visit to America", was a great success. It is by far the most common Beatles EP of all the US releases. However, because part of the EP's sales were through mail-order offers, the trade magazines refused to chart the EP

* [http://www.dermon.com/Beatles/Veejay.htm The Beatles on Vee-Jay Records]