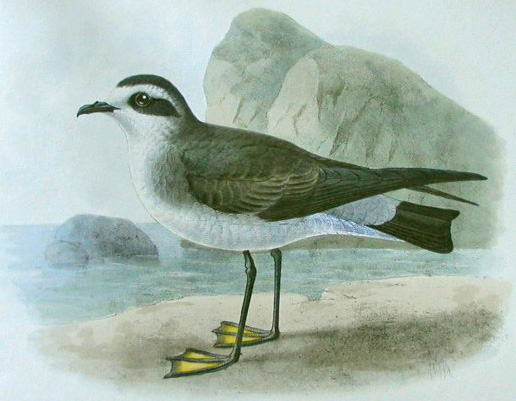 The White-faced Storm-petrel breeds on remote islands in the south Atlantic, such as and also and . There are north Atlantic colonies on the , and . It nests in colonies close to the sea in rock crevices and lays a single white egg. It spends the rest of the year at sea.

The White-faced Storm-petrel is strictly pelagic outside the breeding season, and this, together with its often-remote breeding sites, makes this petrel a difficult bird to see from land. Only in severe storms might this species be pushed into headlands. There have been a handful of western records from , and .

This is strictly nocturnal at the breeding sites to avoid predation by s and s, and will even avoid coming to land on clear moonlit nights. Like most petrels, its walking ability is limited to a short shuffle to the burrow.

The White-faced Storm-petrel is 19-21 cm in length witha 41-44 cm wingspan. It has a pale brown to grey back, rump and wings with black flight s. It is white below, unlike other north Atlantic petrels, and has a white face with a black eye mask like a . Its plumage makes it one of the easier petrels to identify at sea.

It has a direct gliding flight and will patter on the water surface as it picks ic food items from the ocean surface. It is highly gregarious, but does not follow ships.

Widespread throughout its large range, the White-faced Storm-petrel is evaluated as Least Concern on the of Threatened Species.