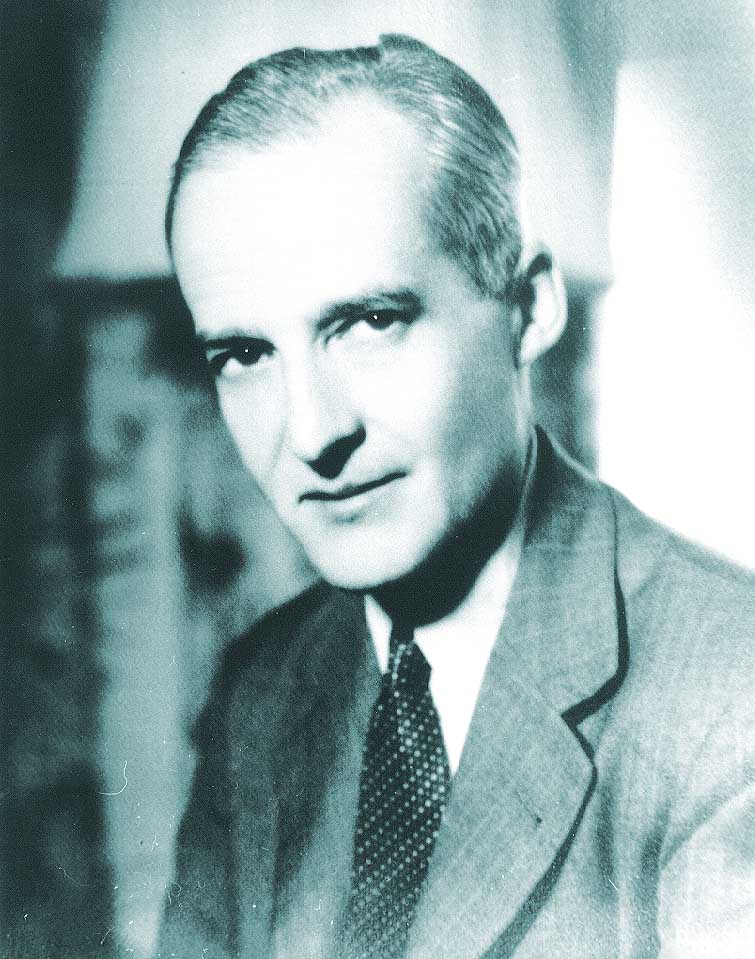 Luis Federico Leloir (, – , ) was an Argentine doctor and biochemist who received the 1970 in Chemistry. He was the first Spanish-speaking scientist to ever receive the award. Although born in France, Leloir received the majority of his education at the University of Buenos Aires and was director of the private research group Fundación Instituto Campomar until his death in 1987. Although his laboratories were often plagued by lack of financial support and second-rate equipment, his research into sugar , metabolism, and has garnered international attention and fame and has led to significant progress in understanding, diagnosing and treating the congenital disease .Luis Leloir is buried in , .

Leloir's parents, Federico and Hortensia Aguirre Leloir, traveled from Buenos Aires to Paris in the middle of 1906 with the intention of operating on Federico's illness. However, Federico died in late August, and a week later Luis was born in an old house at 81 Víctor Hugo Road in Paris, a few blocks away from the

During his childhood, the future Nobel Prize winner found himself observing natural phenomenon with particular interest; his schoolwork and readings highlighted the connections between the natural sciences and biology. His education was divided between Escuela General San Martín(primary school), Colegio Lacordaire(secondary school), and for a few months at in . His grades were unspectacular, and his first stint in college ended quickly when he abandoned his architectural studies that he had begun in Paris' . ["Cientificos Argentinos Distinguidos Con El Premio Nobel En Ciencia" web:http://www.oni.escuelas.edu.ar/olimpi98/ConociendoNuestraCiencia/nobel%20leloir.html]

It was during the 1920s that Leloir supposedly invented "" (golf sauce). After being served prawns with the usual sauce during lunch with a group of friends at the Ocean Club in Mar del Plata, Leloir came up with a peculiar combination of ketchup and mayonnaise to spice up his meal. With the financial difficulties that later plagued Leloir's laboratories and research, he would joke, "If I had patented that sauce, we'd have a lot more money for research right now". [cite web |title=Luis Federico Leloir |author=Pedro Tesone |date=2006|publisher=Sociedad Argentina de Diabetes |url=http://diabetes.org.ar/resena_historica.php|accessdate=2007-03-19]

After returning again to , Leloir obtained his Argentine citizenship and joined the Department of Medicine at the in hopes of receiving his doctorate. However, he got off to a rocky start, requiring four attempts to pass his anatomy exam. [Valeria Roman, "A cien años del nacimiento de Luis Federico Leloir" web:http://www.clarin.com/diario/2006/08/27/sociedad/s-01259864.htm] He finally received his diploma in 1932 and began his residency in the Hospital de Clínicas and his medical internship in Ramos Mejía hospital. After some initial conflicts with colleagues and complications in his method of treating patients, Leloir decided to dedicate himself to research in the laboratory, claiming that "we could do little for our patients... antibiotics, psychoactive drugs, and all the new therapeutic agents were unknown [at the time] ".

In 1933, he met , who pointed Leloir towards investigating in his doctoral thesis the and carbohydrate metabolism. Houssay happened to be friends with , the brother-in-law of , one of Leloir's cousins. Following the recommendation of Udaondo, Leloir began working with Houssay, who in 1947 would later win the . The two would develop a close relationship, collaborating on various projects until Houssay's death in 1971; in his lecture after winning the Nobel Prize, Leloir claimed that his "whole research career has been influenced by one person, Prof. Bernardo A. Houssay". [Luis Leloir, "Two decades of research on the biosynthesis of saccharides" web:http://nobelprize.org/nobel_prizes/chemistry/laureates/1970/leloir-lecture.html]

After only two years, Leloir received recognition from the medical department at UBA for having produced the best doctoral thesis. Feeling that his knowledge in fields such as , , , and was lacking, he continued attending classes at the University as a part-time student. In 1936 he traveled to England to begin advanced studies at the , under the supervision of another Nobel Prize winner, Sir , who had obtained that distinction in 1929 for his work in and in revealing the critical role of in maintaining good health. Leloir's research in the Biochemical Laboratory of Cambridge centered around , more specifically the effects of and on succinic dehydrogenase; from this moment Leloir began to specialize in researching carbohydrate metabolism.

Leloir returned to Buenos Aires in 1937 after his brief stay at Cambridge. 1943 saw Leloir marry; Luis Leloir and Amelia Zuberbuhler would later have a daughter also named Amelia. However, his return to Argentina was amidst conflict and strife; Houssay had been expelled from the University of Buenos Aires for signing a public petition opposing the regime in and the military government led by . Leloir fled to the , where he assumed the position of associate professor in the Department of at , collaborating with and and thereafter worked with at the College of Pysicians and Surgeons, as a research assistant. Leloir would late credit Green with instilling within him the initiative to establish his own research group once back in Argentina.

In 1945 Leloir ended his exile and returned to Argentina to work under Houssay at the Instituto de Investigaciones Bioquímicas de la Fundación Campomar, which Leloir would direct from its creation in 1947 by businessman and patron . Initially, the institute was composed of five rooms, a bathroom, central hall, patio, kitchen, and changing room. [Ariel Barrios Medina, "Luis Federico Leloir (1906-1987): un esbozo biográfico" web: http://www.houssay.org.ar/hh/bio/leloir.htm] During the final years of the 1940s, although lacking financial resources and operating with very low-cost teams, Leloir's successful experiments would reveal the chemical origins of sugar synthesis in as well as the of in the liver; together with J. M. Muñoz, he produce an active cell-free system, a first in scientific research. It had initially been assumed that in order to study a cell, scientists could not separate it from its host organism, as oxidation could only occur in intact cells. [Nicole Kresge, Robert D. Simoni, and Robert L. Hill, "Luis F. Leloir and Biosynthesis of Saccharides" web:http://www.jbc.org/cgi/content/full/280/19/e16] Along the way, Muñoz and Leloir, unable to procure the costly centrifuge needed to separate cell contents, improvised by spinning a tire stuffed with salt and ice. [Ariel Barrios Medina, "Luis Federico Leloir (1906-1987): un esbozo biográfico" web: http://www.houssay.org.ar/hh/bio/leloir.htm]

By 1947 he had formed a team that included Rawell Caputo, Enrico Cabib, Raúl Trucco, Alejandro Paladini, Carlos Cardini y José Luis Reissig, with whom he investigated and discovered why a malfunctioning kidney and helped cause hypertension. ["The Substance Causing Renal Hypertension"(E. Braun-Menedez, J.C. Fasciolo, L.F. Leloir, J.M. Muñoz)"The Journal of Physiology"(1940) no.98 pg.283-298] That same year, his colleague Rawell Caputo, in his investigations of the , made discoveries regarding carbohydrate storage and its subsequent transformation into a reserve energy form in organisms.

At the beginning of 1948, Leloir and his team identified the sugar nucleotides that were fundamental to the metabolism of carbohydrates, turning the Instituo Campomar into a biochemistry institution well-known throughout the world. Immediately thereafter, Leloir received the Argentine Scientific Society Prize, one of the many awards he would receive both in Argentina and internationally. During this time, his team dedicated itself to the study of ; Leloir and his colleagues elucidated the primary mechanisms of galactose metabolism (now coined the Leloir pathway [Holton JB, Walter JH, and Tyfield LA. “Galactosemia” in "The Metabolic and Molecular Bases of Inherited Disease", 8th edition, 2001. Scriver, Beaudet, et al., McGraw-Hill, vol I, chapter 72 , p.1553-1587.] ) and determined the cause of galactosemia, a serious that resulted in .

The following year, he reached an agreement with Roland Garcia, dean of the Department of Natural Sciences at UBA, which named Leloir, Carlos Eugenio Cardini and Enrico Cabib as titular professors in the University's newly founded Biochemical Institute. The Institute would help develop scientific programs in budding Argentinian universities as well as attract researchers and scholars from the United States, , England, France, Spain, and other Latin American countries.

Following Campomar's death in 1957, Leloir and his team applied to the in the United States desperate for funding, and surprisingly was accepted. In 1958, the Institute found a new home in a former all-girls school, a donation from the Argentine government. As Leloir and his research gained greater prominence, further research came from the Argentine Research Council, and the Institute would later become associated with the University of Buenos Aires. ["World of Scientific Discovery", Thomas Gale, Thomson Corporation, 2005-2006]

As his work in the laboratory was coming to an end, Leloir continued his teaching position in the Department of Natural Sciences at the University of Buenos Aires, taking a hiatus only to complete his studies at Cambridge and at the Enzyme Research Laboratory in the United States.

In 1983, Leloir became one of the founding members of the .

On December 2nd, 1970, Leloir received the Nobel Prize for Chemistry from the King of for his discovery of the metabolic pathways in lactose, becoming only the third Argentine to receive the prestigious honor in any field. In his acceptance speech at , he borrowed 's famous 1940 speech to the House of Commons and remarked, "never have I received so much for so little". [Nobelprize.org: "Luis Leloir- Banquet Speech" web:http://nobelprize.org/nobel_prizes/chemistry/laureates/1970/leloir-speech.html] Leloir and his team reportedly celebrated by drinking champagne from test tubes, a rare departure from the humbleness and frugality that characterized the atmosphere of Fundación Instituto Campomar under Leloir's direction. The $80,000 prize money was spent directly on research, [Valeria Roman, "A cien años del nacimiento de Luis Federico Leloir" web:http://www.clarin.com/diario/2006/08/27/sociedad/s-01259864.htm] and when asked about the significance of his achievement, Leloir humbly responded: [cite web |title=Luis Federico Leloir |author=Comodoro Rivadavia |date=|publisher=Chubut Argentina |url=http://www.elchenque.com.ar/artdoc/leloir.htm |accessdate=2007-03-19]

Leloir published a short autobiography, entitled "Long Ago and Far Away" in the 1983 "Annual Review of Biochemistry". The title, Leloir claims, is derived from one of 's novels that depicted the country wildlife and scenery of Leloir's childhood.

He died in Buenos Aires December 2, 1987 of a heart attack soon after returning to his home from the laboratory, and is buried in . , a friend and colleague of Leloir, claims that his lasting legacy was proving that "scientific research on an international level, although precarious, was possible in an underdeveloped country in the middle of political strife" and credits Leloir's vigilance and will for his ultimate success. [Mario Bunge, "Luis F. Leloir" web:http://www.clubdelprogreso.com/index.php?sec=04_05&sid=43&id=2513] With his research in dire financial straits, Leloir often resorted to homemade gadgets and contraptions to continue his work in the laboratory. In one instance, Leloir reportedly used waterproof cardboard to create makeshift gutters in order to protect his laboratory's library from the rain. ["World of Scientific Discovery", Thomas Gale, Thomson Corporation, 2005-2006]

The Fundación Instituto Campomar has since been renamed Fundación Instituto Leloir, and has grown to become a convert|21000|sqft|m2|abbr=on building with 20 senior researchers, 42 technicians and administrative personnel, 8 post doctorate fellows, and 20 Ph.D. candidates. The Institute conducts research in a variety of fields, including , , and . [Instituto Leloir, web:http://www.leloir.org.ar/Paginas/Institute.htm]