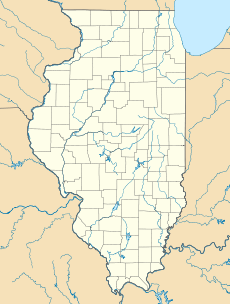 Sign at Belleville Gate entrance. Many buildings on the base are made with a similar style of brickwork.

The base is named after Corporal Frank S. Scott, the first enlisted person to be killed in an aviation crash. The base is operated by the 375th Air Mobility Wing (375 AMW) and is also home to the Air Force Reserve Command's 932d Airlift Wing (932 AW) and the Illinois Air National Guard's 126th Air Refueling Wing (126 ARW), the latter two units being operationally gained by the US Air Force's Air Mobility Command (AMC).

Its airfield is also used by civilian aircraft, with civilian operations at the base referring to the facility as MidAmerica St. Louis Airport. MidAmerica has operated as a Joint Use Airport since beginning operations in November 1997 and has not been served by any commercial airlines since Allegiant Air pulled out of the airport on January 3, 2009.[1][2]

Scott Air Force Base is home to the headquarters of many major military organizations, including:

During World War I, 624 acres (253 ha) of land near Belleville, Illinois became a new airfield. The government announced it would name the field after Corporal Frank S. Scott on July 20, 1917; Scott was the first enlisted person to be killed in an aviation crash. Scott remains the only base in the United States named after an enlisted member.

In September 1917, the training of airplane pilots began. Most training took place in Curtiss JN-3D “Jennies.” These aircraft were used to develop air ambulances. This early aeromedical evacuation later become a primary role for Scott Air Force Base. At the end of World War I, the field’s squadrons were demobilized. In 1919 the War Department purchased Scott Field and turned it over to the lighter-than-air branch of the Air Corps. This lasted until May 14, 1937, when the lighter-than-air crafts were discontinued.[3]

The field was designated as the new home of the general headquarters of the Air Forces of the entire United States Army on June 2, 1938. To prepare for the new role, the old buildings on Scott Field had to come down; demolition began July 18, 1938. The huge hangar, now useless to the army, was sold to the wreckers for $20,051.00. The mooring mast, the old wooden barracks, and the administration buildings were all wrecked. Colonial style administration buildings, family quarters, barracks, together with new hangars and other buildings (in all 73 major buildings) were erected in a $7,500,000.00 building program.[3]

On June 1, 1939, Scott was designated as the Scott Field branch of the Army Air Corps. Technical Schools and the basic section of the school, which was located at Chanute Field, Rantoul, Illinois, was transferred to Scott Field.[3]

An allotment of $1,710,150.00 was made in August 1941 for the construction of 160 new buildings, because with the designation of Scott as the communications training center of the Army Air Force, more housing was needed for students. Cantonment areas were constructed in the southeast and northeast sections of the field. A short time later, the Army built an induction center across the Southern Railroad tracks. This area was later annexed to Scott Air Force Base.[3]

In 1952, two additional housing areas were added: Pagelow Apartments, 80 units for officers, and a 1,000-unit "city" north of the base erected under the provisions of the Wherry Housing Act. Also in 1952 a modernization program was begun to provide quarters for bachelor officers and bachelor non-commissioned officers, training areas, and warehouse space at a cost in excess of $14,000,000.00.[3]

The residential part of the base is a census-designated place; the population was 3,612 at the 2010 census.[4]

There were 682 households out of which 78.0% had children under the age of 18 living with them, 90.5% were married couples living together, 4.3% had a female householder with no husband present, and 2.9% were non-families. Of all households, 2.8% were made up of individuals, and none had someone living alone who was 65 years of age or older. The average household size was 3.83, and the average family size was 3.90.