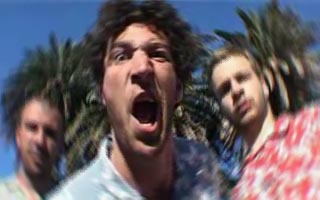 Bad Copy are a popular hip-hop group from , known for their humorous lyrics and . The members are (stage name of Vladan Aksentijević), (Rašid Kurtanović) and (Đorđe Miljenović). They have released several albums as a group and as solo artists and helped the popularisation of in and in the new millennium.

The group started off as a duo consisting of Ajs Nigrutin and (Milan Šaponja). Their first album "", released by ITMM in 1996, mostly contained comical songs rapped over instrumentals from popular American rap acts such as and . The standout track was "Zabaci domaćine", which turned 's "" into a song about a fishing trip gone wrong. The album failed to get much media attention, but it established them a cult following.

The death of Miki Boj in an accident in in 1999 resulted in a hiatus that lasted a few years. The group was then comprised of Ajs Nigrutin and Timjah, with Wikluh Sky joining later. Songs recorded in that period showed major improvement over their early efforts, developing their rapping skills drastically while still keeping trademark irreverent lyrics. They joined forces with , then an up-and-coming beatmaker who was working on starting the first label, . They had a very prolific collaboration, recording lots of songs but none of them ever getting released. By the end of 2002, dissatisfied with initially agreed schedule of their album being released only after V.I.P., Oneya and Shorty even though they weren't the first ones with a fully recorded album, they wanted to end their contract with Bassivity. Eventually they were dropped with no penalties by the label. Many of the recorded songs were later [http://warez.default.co.yu/edesi/audio/ leaked to the internet] , while almost none were released on other Bassivity projects.

Recording all-new material in a radio station studio during the first half of 2003, the group released their second album "" for the One Records label. The album had a specific sound as a result of being recorded and mastered in less-than-perfect ghetto conditions, but it was a huge hit for a short time on the strength of the first single, "Uno Due Tre", produced by Ajs Nigrutin, with the complete song lyrics consisting of unconnected Italian words and phrases (some copied off of shampoo labels and clothing tags), and with a very low budget video recorded in the old town of , (), by of . The second single "Možeš ti to", also produced by Wikluh Sky and also with a video by Đolođolo, was moderately successful. "Sve sami hedovi" sold more than 5000 copies, which is considered a moderate success in the current state of music in and as a head-to-head competition. ( [http://warez.default.co.yu/edesi/video/bedkopi2.wmv video1] , [http://warez.default.co.yu/edesi/video/bedkopi3.wmv 2] ), where they carried a table and a pot of Sarma onto the stage, ate it in front of the audience and handed it out to the front rows.

The third Bad Copy album, entitled "" ("The Worst Yet"), was released in December 2006. Guests on the album include Škabo, Bvana, Edo Maajka, and . The first song to get a video is "Žoor," directed by Đolođolo.The second single is "Idemo odma," also directed by Đolođolo.

All three members of the group have recorded solo albums, with Timjah's being the only one not getting a release due to an early leak to the internet.

Wikluh Sky is the most productive member, constantly working on multiple projects, many of them outside of hip-hop, but seldom releasing them. Among his works are one album with the group (with Coyote of the band ); a punk album with the band Jogurt; a called "" ("A Pollution in ") about a star, written for the EXIT festival in 2005; a solo rap albums called "" (2004) and "" (2007).

Ajs Nigrutin and Timjah have released a compilation of songs under the name - "" in 2004, with a list of guests including their young proteges and Kibu, long-time collaborators Prti Bee Gee and , and others such as . Most recently, Ajs Nigrutin and Wikluh Sky serious argue lead to group break-up. Now, only Ajs Nigrutin and Timjah Da Sensei are members of Bad Copy. Ajs Nigutin accused Wilkuh Sky for his soft music turn-over, like working on some popular pop singers (Ana Stanic) and his unsatisfied dedication to group (they recently start to work on their new album).

Members of Bad Copy have also done songs with many other hip-hop artists, among which are , V.I.P. (and other Bassivity artists), , , etc.