Palomar Observatory is a privately owned observatory located in San Diego County, California, 90 miles (140 km) southeast of Pasadena's Mount Wilson Observatory, in the Palomar Mountain Range. At approximately 5,570 feet (1,700 m) elevation, it is owned and operated by the California Institute of Technology. Research time is granted to Caltech and its research partners which includes the Jet Propulsion Laboratory, and Cornell University.[1]

Astronomer George Ellery Hale, whose vision created the Palomar Observatory, built the world's largest telescope four times. He published an article in the April 1928 issue of Harper's Magazine called "The Possibilities of Large Telescopes". This article contained Hale's vision for building of what was to become the 200-inch Palomar reflector; it was an invitation to the American public to learn about how large telescopes could help answer questions relating to the fundamental nature of the universe. Hale hoped that the American people would understand and support his project. In fact the 200-inch telescope was the most important telescope in the world from 1949 until 1992 when the Keck I telescope (at approximately 10 meters - 387 inches) on Mauna Kea in Hawaii became the world's largest.

Hale followed this article with a letter to the International Education Board (later absorbed into the General Education Board) of the Rockefeller Foundation dated April 28, 1928, in which he requested funding for this project. In his letter, Hale stated:

"No method of advancing science is so productive as the development of new and more powerful instruments and methods of research. A larger telescope would not only furnish the necessary gain in light space-penetration and photographic resolving power, but permit the application of ideas and devices derived chiefly from the recent fundamental advances in physics and chemistry."

The word palomar is from the Spanish language, dating back from the time of Spanish California, and means pigeon house (in the same sense as henhouse). The name may be in reference to the large shoals of pigeons that can be seen during the spring and autumn months atop Palomar Mountain or reminiscent of an old pigeon-raising facility built there by the Spaniards.[citation needed]

The 200-inch (5.08 m) telescope is named after astronomer George Ellery Hale. It was built by Caltech with a 6 million dollar grant from the Rockefeller Foundation, using a Pyrex blank manufactured by Corning Glass Works. The telescope (the largest in the world at that time) saw first light January 26, 1949 targeting NGC 2261.[2] The American astronomer Edwin Powell Hubble, perhaps the most important observer of the 20th century, was given the honor of being the first astronomer to use the telescope.

Astronomers using the Hale Telescope have discovered distant objects at the edges of the known universe called quasars and have given us the first direct evidence of stars in distant galaxies. They have studied the structure and chemistry of intergalactic clouds leading to an understanding of the synthesis of elements in the universe and have discovered thousands of asteroids. A one-tenth-scale engineering model of the telescope at Corning Community College in Corning, New York, home of the Corning Glass Works (now Corning Incorporated) was used to discover at least one minor planet, (34419) Corning † 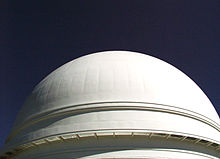 According to the Observatory's Public Affairs Office, Russell W. Porter was primarily responsible for the striking Art Deco architecture of the Observatory's buildings, most notably the dome of the 200 inch Hale Telescope. Porter was also responsible for much of the technical design of the Hale Telescope and Schmidt Cameras, producing a series of remarkable cross-section engineering drawings that are considered among the finest examples of such work.[citation needed] Porter worked on the designs in collaboration with many engineers and Caltech committee members. The iconic, gleaming white building on Palomar Mountain that houses the 200 inch Hale Telescope is considered by many to be "The Cathedral of Astronomy".[citation needed] 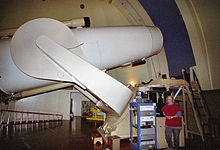 Major instruments at the Palomar Observatory include:[3]

The initial Palomar Observatory Sky Survey (POSS or POSS-I), sponsored by the National Geographic institute, was completed in 1958. The first plates were shot in November 1948 and the last in April 1958. This survey was performed using 14 inch2 or (6 degree)2 blue-sensitive (Kodak 103a-O) and red-sensitive (Kodak 103a-E) photographic plates on the 48 inch (1.22 m) Samuel Oschin Schmidt reflecting telescope. The survey covered the sky from a declination of +90 degrees (celestial north pole) to -27 degrees and all right ascensions and had a sensitivity to +22 magnitudes (about 1 million times fainter than the limit of human vision). A southern extension extending the sky coverage of the POSS to -33 degrees declination was shot in 1957 - 1958. The final POSS I consisted of 937 plate pairs.

Fritz Zwicky was the first astronomer to observe on Mt. Palomar and was the father of the Sky Survey Technique.[6]

Digitized Sky Survey (DSS) produced images which were based on the photographic data developed in the course of POSS-I.[7]

The Second Palomar Observatory Sky Survey (POSS-II) was performed in the 1980s and 1990s that made use of better, faster films and an upgraded telescope. The Oschin Schmidt was given an achromatic corrector and provisions for autoguiding. Images were recorded in three wavelengths: blue (IIIaJ), red (IIIaF) and near infrared (IVN) plates, respectively. Observers on POSS II included C. Brewer, D. Griffiths, W. McKinley, D. Mendenhall, K. Rykoski, J. Phinney and Jean Mueller (who discovered over 100 supernovae by comparing the POSS I and POSS II plates). Ms Mueller also discovered several comets during the course of POSS II and the bright Comet Wilson 1986 was discovered by then graduate student C. Wilson early in the survey.[8]

Until the completion of the Two Micron All Sky Survey (2MASS), POSS-II was the most extensive wide-field sky survey ever. When completed, the Sloan Digital Sky Survey will surpass POSS-I and POSS-II in depth, although the POSS covers almost 2.5 times more area on the sky.

POSS-II also exists in digitized form (i.e., the photographic plates were scanned), both in photographic form as the Digitized Sky Survey (DSS)[9]

The multi-year POSS projects were followed by the Palomar Quasar Equatorial Survey Team (QUEST) Variability survey.[10] This survey yielded results that were used by several projects, including the Near-Earth Asteroid Tracking project. Another program that used the QUEST results discovered 90377 Sedna on 14 November 2003, and around 40 Kuiper belt objects. Other programs that share the camera are Shri Kulkarni's search for gamma-ray bursts (this takes advantage of the automated telescope's ability to react as soon as a burst is seen and take a series of snapshots of the fading burst), Richard Ellis' search for supernovae to test whether the universe's expansion is accelerating or not, and S. George Djorgovski's quasar search.

The camera for the Palomar QUEST Survey was a mosaic of 112 Charge-coupled devices (CCDs) covering the whole (4 degree by 4 degree) field of view of the Schmidt telescope, the largest CCD mosaic used in an astronomical camera when built. This instrument was used to produce The Big Picture, the largest astronomical photograph ever produced.[11] The Big Picture is on display at Griffith Observatory.

The 60-inch telescope is used for a variety of projects including follow-up observations for the Palomar Transient Factory and is a rapid response telescope for gamma-ray bursts.

In September 2007, a team of astronomers from the United States and Britain released some of the clearest pictures ever taken of outer space. The pictures were obtained through the use of a new hybrid "Lucky imaging" and "adaptive optics" system which sharpens pictures taken from the Palomar Observatory. The resolution attained exceeds that of the Hubble Space Telescope by a factor of two.[15]

The Palomar Observatory is an active research facility. However, parts of it are open to the public during the day. Visitors can take self-guided tours of the 200-inch (5.08 m) telescope daily from 9 a.m. to 3 p.m. Guided tours of the 200-inch Hale Telescope dome and observing area are available Saturdays and Sundays from April through October. Details are available at the Observatory's web site, http://palomar-observatory.org. There is a visitor's center and a gift shop on the grounds. Behind-the-scenes tours for the public are offered through the community support group, Friends of Palomar support group. Periodic tours are also organized by the Reuben H. Fleet Science Center in San Diego.[16] The observatory is located off State Route 76 in northern San Diego County, California, is two hours' drive from downtown San Diego, and three hours' drive from central Los Angeles ( UCLA, LAX airport ).

The band Wellwater Conspiracy's 1997 debut album, Declaration of Conformity, contains a track entitled "Palomar Observatory." It is the last track on the album and completely instrumental. It is likely the track title was chosen by singer/drummer Matt Cameron, who grew up in San Diego near the observatory. Also, Canadian band The Rheostatics 11th track from their effort Whale Music is entitled Palomar. The song depicts a man named Palomar on the top of a mount, cleaning his lenses with saline waters. Palomar assembles his kaleidoscope in his lonely observatory. The song presents a visual characterization of a man on a mountain and his relationship with his best friend, a dog.

Palomar is mentioned in the first episode of season 2 of The X-Files, "Little Green Men". Fox Mulder refers to Hale's suggestion that an elf[17] crawled through his window and told him to build the observatory.

Much of the surrounding region of Southern California has adopted shielded lighting to reduce the light pollution that would potentially affect the observatory.[18]