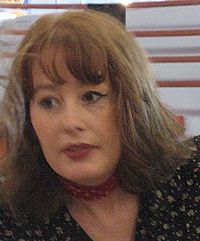 Åsa Linderborg at the Göteborg Book Fair in 2006.

Åsa Natacha Linderborg (née Andersson, born 20 May 1968) is a Swedish writer and historian. She writes regularly for Aftonbladet, where she works as chief cultural editor.

In 2007 her first novel, the autobiographical Mig äger ingen, was released. The book received good reviews and was nominated for the August Prize in the category best Swedish-language novel of the year.