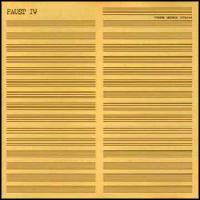 
"Faust IV" is a album by the pioneering German group Faust.

Opener "Krautrock" is a monotonous drone-based instrumental where the drums kick in only after seven minutes, whilst later tracks such as "The Sad Skinhead" and "Jennifer" employ more conventional songwriting techniques. The medley including "Picnic on a Frozen River, deuxième tableau" is a rework of a track from the previous album "". The closing track "It's a Bit of a Pain" combines both styles, utilising noise during its chorus.

Track titles and times on the original (V2004) LP release. All tracks written and performed by Faust.

The first CD release of the album mislabels several tracks. It also separates "Läuft..." in two tracks, 4:28 and 3:40 in length.