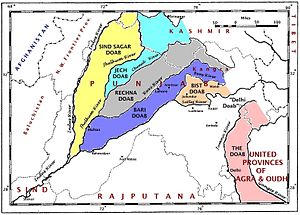 A map of the Punjab region ca. 1947 showing the different doabs.

Majha (Punjabi: ਮਾਝਾ, ماجھا; Hindi: माझा Mājha) is a region of the Punjab comprising the modern districts of Amritsar, Gurdaspur and Tarn Taran in the Indian State of Punjab and the districts of Narowal, Lahore and Kasur in the Pakistani Province of Punjab. The term previously applied to Panjabis living north of the Sutlej.[1] Historically, Majha comprised the older settled parts of the Bari Doab (in particular Sheikhupura) and the Rechna Doab (in particular, Gujranwala), the newer settled parts belonging to the canal colonies.[2] Major towns in the region include Amritsar, Batala, Majitha, Sri Hargobindpur, Dera Baba Nanak, Qadian, Pathankot, Rawalpindi, Gurdaspur, Narowal, Lahore, Kasur, Sheikhupura, Nankana Sahib Gujranwala, Sialkot, Wazirabad, Gujrat, and Tarn Taran Sahib. The people of Majha are known as 'Majhis' or 'Majhhis'. 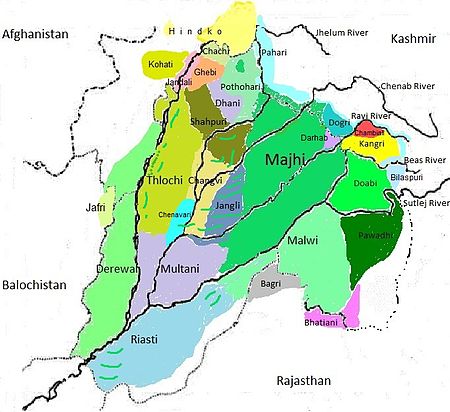 The largest part of Majha called the Bari Doab. It lies between two of the five great rivers of the Punjab: the Ravi and the Beas(Ba- For Beas, and -ri for River Ravi). As such, Majha lies in the heart of the ancient Punjab region. No wonder then, that one meaning of Majha is 'the central plains' or 'the central country'.

Majha was mainly Hindu with few Muslims But during the Sikh Gurus Period (1469-1708) all of Majha embraced Sikhism as there religion.

Majha Region has many historical places and buildings, like the Badshah masjid located in Lahore. For Sikh Religion it was here that 500 years ago Sikhism was born in Medieval Punjab, Millions of Sikhs Every year or on other Occasions Visit Historic Gurdwara of Majha Such as Harmandir Sahib Amritsar, Tarn Taran Sahib, Khadur Sahib, Baba Bakala, Goindwal Sahib, Dera Baba Nanak, and many more Thousands of Thousands of Historic Gurdwaras through out the Majha Region in both India and Pakistan.

The people of Majha are known as 'Majhis' or 'Majhhis'.