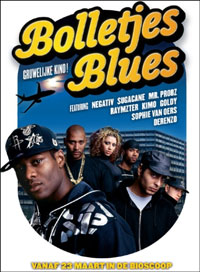 "Bolletjes Blues" ("Gangsta Blues", also known as "Bling!") is a 2006 Dutch with Negativ as the main character, Spike.

Spike is a young black man from who lives in the . He is a student first, but drops out. In order to have enough money to impress his white girlfriend Rosalie () he joins a gang led by Delano () and commits various robberies.

A related gang operates a route from Suriname to the with mules swallowing cocaine pellets. As a mule, Spike is arrested on departure from (Zanderij) near , and incarcerated at prison.

Rosalie volunteers as mule also, in order to be able to visit Spike. The film ends after this visit, it does not show whether she actually swallows and smuggles cocaine pellets.