The current building is two stories tall with two round halls, the Great Hall and the Caucus Room. It is located in Yellowknife, and overlooks Frame Lake. It was designed by Ferguson Simek Clark/Pin Matthews (of Yellowknife) in association with Matsuzaki Wright Architects Inc. (of Vancouver), and landscape architect Cornelia Oberlander.

The House was originally built for the provisional government of Louis Riel.

Sketch of Fort Livingstone circa 1877. The Swan River Barracks are visible at the top of centre of the sketch.

The Northwest Territories government moved to Fort Livingstone in 1876. Legislative sessions were held inside the Swan River Barracks which operated and housed the North-West Mounted Police. The Barracks were built two years earlier in 1874, and destroyed by a wild fire long after the Government left in 1884.[2] In addition to serving the Government, the Barracks served as living quarters for 185 men and their horses.[2]

For more details on this topic, see Government House (Battleford).

The NWT Government House in Battleford was the first building designed for the Northwest Territories Legislative Assembly. It was used for sessions from 1877 to 1883. The building also served as residence for the Lieutenant Governor who had to preside over Assembly sessions and the Executive council. The building was destroyed by fire in 2003.

The Territorial Government buildings in Regina, dating from 1883, consisted of the Legislative Building, the Administration Building and the Indian Office and were designed by the Dominion architect, Thomas Fuller. The mansard roofed Administration Building remains standing. After the North-West Territories Legislature was moved to Ottawa in 1905, the building housed the Legislative Assembly of Saskatchewan until 1910. In 1922 the building was partially destroyed by fire; the Saskatchewan government repaired the building and leased it to the Salvation Army until 1971. The building was fully restored and made a heritage site in 1979.[3]

After the Legislative Assembly was dissolved in 1905 the government was run out of an office building on Sparks Street in Ottawa. 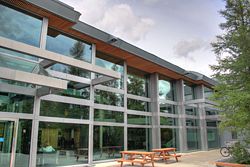 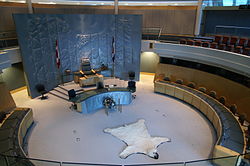 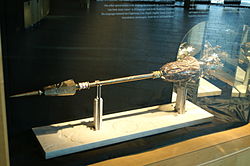 The Mace of the Legislative Assembly

The new Legislative Assembly Building in Yellowknife was completed in 1993. It was the first building specifically built for the needs of the Assembly since the Territorial Administration Building in Regina. The new building was designed with themes from the local native populations that inhabit the territories and was designed for a 100 year-plus life span.

Sited directly on the lake shore, it is nestled between rock outcroppings of the Canadian Shield, a natural peat bog, and large stands of existing trees. Extensive use of natural materials was used throughout, including zinc panels, maple ceiling and panels, and slate floors. The exterior cladding is zinc, an economically significant material mined in the Territories. The curved roof edges provide a finished appearance for airplane passengers taking off/landing at the nearby main airport across the lake in addition to its airplane-wing shape helping to wind-scour snow from the roof to avoid ice and water damage.

The Great Hall has floor-to-ceiling windows facing directly into the treed forecourt allowing the natural slate floor appear to merge the inside with the outside. Special consideration was given to maximizing natural light to all of the main spaces and offices. Opening vent panels in each Members' office provides user-control of fresh air and an environment suited for people who may not be accustomed to spending days in an air-conditioned office building.

The Chamber and Caucus Room are circular to support the consensus-style government. Translation booths surround the Chamber for translators to provide simultaneous translation of the Terrirories' eleven official languages for all Members. Skylights ring the Chamber and Caucus Room as sunlight and daylight come from 360 degrees during the summer. The wall behind the Speaker is of hand-tooled zinc which mimics nearby rock formations. The stand in front of the Speaker's Chair is for the parliamentary mace which, in addition to indicating the authority of the Crown, incorporates ivory walrus tusks and wood from the ill-fated ships of the 1845 Franklin expedition.

Construction was undertaken using a fast-track method to meet critical construction and opening deadlines. Major construction materials needed to be brought north to Yellowknife, including by ferry in the summer and ice roads in the winter. During spring thaw and fall freeze-up neither was accessibile. The steel structure therefore had to be erected during the winter which meant almost no welding was possible and most connections had to be bolted.

Careful attention was given to preserving and restoring the landscape, which involved careful protection of existing trees which were only 10 feet from the exterior walls. Native plants were harvested and propagated in "The South", where growing seasons are longer, then returned to the site for restoration of the lakeshore and peat bog. The services annex for the building also has a planted roof which lessens the reduction in natural planted area by the building's footprint.