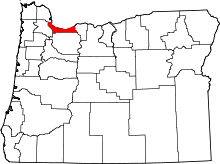 Multnomah County highlighted in Oregon; Portland is mostly within the eastern part of the County.

Multnomah County, Oregon, the city of Portland, Oregon, and Metro (Oregon regional government) held elections on May 16 and November 7, 2006.

NOTE: Serena Cruz is unable to run due to term limit law.

Elections for the Multnomah County Circuit Court (Oregons fourth judicial district) were unusually dynamic. Circuit court judges in Oregon are normally appointed by the governor of Oregon, and subsequently run for re-election as incumbents, rarely facing opposition. In 2006, three races were contested or competitive.

Position 31 was vacated by the retirement of Judge David Gernant; five candidates competed in the May primary election, with Cheryl Albrecht and Kathleen Payne advancing to the runoff in the general election. Albrecht won in November with 54% of the vote.

Position 28 opened with the death of Judge Cliff Freeman shortly before the filing deadline. Ten candidates filed for the seat (though Trung Tu, who had previously run for Position 31, withdrew his candidacy). Judith Hudson Matarazzo won the election.

Position 37 was the subject of great controversy. Youlee Yim You had been appointed by Governor Ted Kulongoski on August 9, 2006. Oregon law requires appointees to run for election after their appointment, so You filed for election, and was expected to be on the ballot as the incumbent. Leslie Roberts, a former neighbor of You, filed to oppose her, and then made a complaint that You was not qualified to run (due to a rule about the duration of her residence in Oregon). You's name was removed from the ballot.

Charles Henderson then entered the race as a write-in candidate. Roberts, who was unopposed on the ballot, won the race; Henderson won 23% of the vote. You was later re-appointed, and won election to a six year term in 2008.