The Powers of Matthew Star

The Powers of Matthew Star

The Powers of Matthew Star is an American sci-fi television series that aired from September 17, 1982 through April 8, 1983, on NBC. It starred Peter Barton (Friday the 13th: The Final Chapter, Burke's Law, Sunset Beach as the title character of alien prince Matthew ‘E’Hawke’ Star of the planet Quadris. Also starring in this show were Amy Steel (Friday the 13th Part 2, For Love and Honor) as Matthew’s girlfriend at Crestridge High Pam Elliot, and Louis Gossett Jr. (Iron Eagle, Roots, Stargate SG-1) as Matthew’s guardian Walt ‘D’hai’ Shepherd, charged by Matthew’s father to protect his son until such time as Matthew’s powers were at a level that they were developed enough so that he could return to Quadris and liberate it from the alien armada that conquered it for reasons of their own.[1]

The show was created by Steven E. De Souza, and was executive produced by Daniel Wilson, Harve Bennett (Star Trek’s II-V), and Bruce Lansbury (well known for many series produced in the 80’s). It also boasted of an episode directed by Leonard (Spock) Nimoy called ‘Triangle’ and an episode written by Walter (Pavel Checkov, Alfred Bester) Koenig called ‘Mother’. It also should be noted that both Peter Barton and Amy Steel beat out actors Tom Cruise and Heather Locklear for the roles of Matthew Star and Pam Elliot, respectively. So there has been some star power (no pun intended), connected with this show.[2]

The series was originally called The Powers of David Star[3]. With this title and a somewhat altered premise, the original pilot was to deal with teenaged David Star, who lived with the school janitor, Max (Gerald S. O'Loughlin). Max had a secret he was not sharing with David, who had no idea that he and Max were from another planet. As his powers began to surface, David started to understand who he was. Hot on their trail was the FBI. The original pilot was aired as the last episode of the series. TV Guide's 1981 Fall Preview issue's network schedule grid lists the original series title as The Powers of Daniel Star.

The program, originally slated to debut in 1981 with the new title and storyline, was delayed when Peter Barton fell backward onto pyrotechnics and was badly burned, while co-star Louis Gossett, Jr., tied to a chair, had fallen on top of Barton but managed to rescue him. After months in the hospital, Barton was released, and the show resumed shooting.[4] 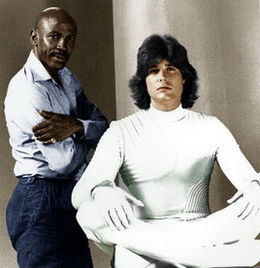 "Quadris, a planet of the (Tau Ceti) system, twelve light years across the galaxy from Earth. It was home for us until an intergalactic armada conquered it. I fought by the royal family's side, but in vain. Even their remarkable powers weren't enough. The crown prince and I escaped to the nearest planet on which we could survive and further his powers in order to some day return to free his people.

"Here on Earth, the prince is known as Matthew Star. He's a typical American teenager. He has friends; people who love him. And me, his guardian. I'm the only one who knows how special he is. Life for us is a series of joys and dangers. Enemy assassins constantly come to destroy us. Alone, we must survive."

The powers possessed by E'Hawke/Matthew were inherited from his parents, and only the royal family on Quadris has them. Other Quadrians may have powers of their own. The two that presided over Matthew’s coronation in the cave (played by Julie Newmar and Jeff Corey) had power to cast powerful illusions in an effort to test Matthew when he went with Pam to find her uncle in the episode ‘Triangle’. Quadrians may also have the ability to delay death, if the two Quadrians in the episode ‘Triangle’ are any indication. But it is very painful of them to do so apparently.[5]

The powers as displayed by Matthew consist of telekinesis, telepathy and clairvoyance in the earlier episodes, and telekinesis, transmutation and astral projection in later episodes. The powers of Matthew's parents are unspecified; it is assumed they are similar in nature to Matthew's albeit far more highly developed.

Much of the plotline deals with Matthew honing his powers, which are naturally weak and undisciplined given his young age. He must practice his "art" in secret, obviously, and is continually resisting the temptation to use them against bullies and other frivolities. Matthew is forced to use his powers at times to save his and Walt's lives.

D'Hai/Walt does not have any powers, being not of royal blood. He does appear to have great strength, although this may be merely a product of excellent physique. 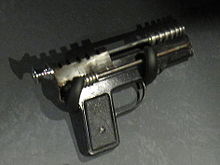 Pistol used in The Powers of Matthew Star (Science Fiction Museum and Hall of Fame, Seattle)

The name of the Marauding species that attacked Quadris is unrevealed. They seem human enough but they tend to explode when they hit water. Then again these ‘human replicants’ may just be service drones working for a real enemy, an image of which may have been seen in the first pilot (when "Matthew" was "David"). As to why the Marauders would invade, that, too, is not known. But it may have to do with powers the Quadrians possess. They do seem to have incredible strength, and the Marauder in the second pilot, played by Judson Scott (Star Trek II, [[The Phoenix]), mentioned someone named ‘Olan’ who gave them chemicals to feel pleasure. We never find out who ‘Olan’ is on the show.[6]

First half of series

The first half of the series' run dealt with Matthew Star attending Crestridge High School and trying to survive his teenage years while dodging assassins, all under the watchful eye of his guardian, Walter Shepherd, who stayed nearby as a science teacher at the school. Those in their lives who had no idea about the truth were girlfriend Pam Elliot (Amy Steel), friend Bob Alexander (Chip Frye), and the merry principal, Mr. Heller (Michael Fairman).

General Tucker (John Crawford), an Air Force officer specializing in extraterrestrial investigations, had tracked the two of them across the country as they evaded alien agents intent on exterminating them. From time to time, he enlisted their specialized aid in solving monumental problems.

The first dozen episodes dealt with the daily troubles of high school students, although in the episode "The Triangle," a chance trip to the Bermuda Triangle resulted in the discovery of messengers from Quadris, who told the pair that the king had been executed. E'Hawke/Matthew was crowned the new king in a torch-lit cave.

In the episode "Mother," a strange carnival gypsy turned out to be Matthew's mother Nadra, who had been traveling the galaxy and hiding from assassins. This reunion was bittersweet because, due to Nadra's health problems, she was forced to leave Crestridge for an undisclosed location with a higher elevation.

Finally, in the "Fugitives" episode, Walt, trying to elude a nosy doctor, comes into contact with a substance in the hospital that causes him to have a deadly allergic reaction. At the same time, Matthew is being booked into jail and needs Walt to bail him out. At the last minute, Matthew manages to save Walt, as he has done many times throughout the series.

Second half of series

The series took a sudden turn from a dramatic adventure series to a by-the-book adventure series, with Walt and Matthew having to deal with government assignments. Major Wymore (James Karen) replaced General Tucker (John Crawford) and met with the Quadrians in all sorts of strange locations where he briefed them on the missions. Gone were Pam and Bob and references to the high school. Matthew was being portrayed as older, and not much was said about their true mission: which was returning to Quadris to take back their world from the enemy.[7]

Matthew had used the name "Shep" for his guardian, but with the sudden format change, Matthew started calling him Walt.

The series was cancelled after one season. The show ended ironically with the first pilot with Barton as ‘David Star’ being the final episode.

A summer rerun was erroneously broadcast for several minutes during the 1983 live broadcast of the U.S. Open tennis match. Reports at the time indicated that a technical error was made at a television swiching center in Chicago.

I Am Number Four