The New Palace in Sanssouci Park.

The New Palace (German: Neues Palais) is a palace situated on the western side of the Sanssouci royal park in Potsdam, Germany. The building was begun in 1763, after the end of the Seven Years' War, under Frederick the Great and was completed in 1769. It is considered to be the last great Prussian baroque palace.

New Palace with the Communs

The building of the palace commenced at the end of the Seven Years' War, to celebrate Prussia’s success. The war is also variably referred to as the Third Silesian War, owing to the dispute over Silesia. In an architectural form, Frederick the Great sought to demonstrate the power and glories of Prussia attributing it as fanfaronade, an excess of splendor in marble, stone and gilt.

For the King, the New Palace was not a principal residence, but a display for the reception of important royals and dignitaries. Of the over 200 rooms, four principal gathering rooms and a theater were available for royal functions, balls and state occasions. During his occasional stays at the palace, Frederick occupied a suite of rooms at the southern end of the building, composed of two antechambers, a study, a concert room, a dining salon and a bedroom, among others.

After the death of Frederick the Great in 1786, the New Palace fell into disuse and was rarely occupied as a residence or entertainment venue. However, starting in 1859 it became the summer residence of the German Crown Prince, Frederick William, later German Emperor Frederick III. The palace was the preferred residence of Frederick and his empress, Victoria, throughout the 99 Days’ Reign. During the short reign of Frederick III, the palace was renamed Friedrichskron Palace (Schloß Friedrichskron) and a moat was dug around the palace. The ascension of William II saw renovation and restoration within the palace being carried out with the installation of steam heating, bathrooms in state apartments and electrification of the chandeliers which Frederick the Great had collected from across Europe. Until 1918, it remained the preferred residence of William II and the Empress Augusta.

After the November Revolution and the abdication of William II, the New Palace became a museum and remained such until the Second World War. Much of its furniture had been removed and taken to the residence of the exiled William II at Huis Doorn in the Netherlands. Some of the palace’s treasures were looted by Soviet Army at the end of the second world war. The majority of the furnishings were discovered by the Dutch in the 1970s, still in their original packing crates, and returned to Potsdam. Because of this, and because it was fortunate enough to escape bombing in the Second World War, the palace today looks much as it did in 1918.

View of the New Palace from the gardens

New Palace, from the other side.

While Frederician Rococo was established at Sanssouci, Frederick the Great had the New Palace built in varying forms of baroque architecture and decoration, with some deviations. The King preferred rococo and baroque to the classicism that was already taking hold of Europe at the time as the preference of many monarchs. Architect Johann Gottfried Büring, with the aid of Heinrich Ludwig Manger, was assigned with the task of planning the New Palace and had already demonstrated success with the completion of the Chinese Teahouse and the Picture Gallery in the Sanssouci royal park.

After disagreements over the design of the palace, in 1764 the design of the palace was totally vested in the architect Carl von Gontard. The three-story façade had already begun to rise around unfinished interiors, as construction had steadily been underway. With 220 metre east and west façades, the centre portion of the palace was crowned with an enormous dome, at the top of which were placed the Three Graces supporting the Prussian royal crown. The dome is not only architectural, it provides an attic area under the supporting timbers which carry it. Additionally, the north and south auxiliary wings are crowned with domes surmounted by gilded eagles. Between the pilasters, what appears to be brick is actually a painted effect, leaving only the King’s south wing with exposed brick. Repointing the mortar of the joints proved to be an arduous and expensive task, therefore Frederick had the brick covered in stucco and painted in such a way that even tourists today are fooled by the deceptive finish. Over 400 sandstone statues and figures adorn the palace and auxiliary buildings, created by many notable sculptors, namely Johann Peter Benckert, Johann Matthias Gottlieb Heymüller, the brothers Johann David and Johann Lorenz Räntz and more.

In addition to splendid royal apartments, four grand staterooms (festival halls) occupy the central portion of the palace. On the ground floor is the Grotto Hall, attributed to Carl von Gontard, with walls encrusted with shells, stones, marble, quartz and semi-precious stones, which were enriched in the nineteenth century. With the design of the hall is a marble floor depicting marine animals and plants and an 1806 ceiling painting, Venus and Amor, the Three Graces and Putti. Attributed to Johann Gottfried Niedlich, the painting replaces an earlier work. Niches around the room contain statuary and fountains, with cut crystal chandeliers hung in the arches.

The southern Marble Gallery, on the ground floor, leads to the apartments of the King. Decorated in white marble and red jasper, it is one of the most important examples of rococo decoration within the palace. Six windows are set opposite to mirrored niches, which reflect light throughout the room. Three large crystal chandeliers are suspended from a heavily gilt ceiling bearing three large paintings; Night, Morning and Midday by the artist Bernhard Rode. Eighteenth century chairs upholstered in leather, vases of faux Egyptian porphyry and console tables furnish the gallery.

Situated directly over the Grotto Hall is the Marble Hall, the largest of the festival halls, which was used variously as a ballroom and as a banqueting hall. Rising over two floors, the hall overlooks the eastern parterres and the axial vista leading to Sanssouci. The richly gilt, curved ceiling rises into the attic area under the great copper dome. The painting in the center of this ceiling, Hebes leads Ganymede to Olympus, was created in 1769 by Charles-Amédée-Philippe van Loo. Four enormous paintings commissioned before the Seven Years' War adorn the marble walls of the hall. Positioned at the pilasters are twelve statues, depicting eight Brandenburg Prince-electors and four famous "emperors": Julius Caesar, Constantine, Charlemagne and Rudolph II. A balcony with an intricate gilt iron railing overlooks the hall from the third floor.

The Upper Gallery within the palace is situated to the south of the Marble Hall and is directly above the Marble Gallery on the ground floor. The ceiling is painted in hues of rose, antique yellow and white, accented with heavy gilt ornamentation. The ever-popular classicism of Europe at the time can be seen in the roundels positioned above and on the doors. Six large Italian baroque paintings hang opposite the windows of the gallery. All that remains of the original furnishings are three marble mosaic console tables and upholstered settees.

After the revolution of 1918, which overthrew the monarchy, the Weimar Republic allowed a full train load of furniture from the palace to be sent to the exiled William II at Huis Doorn in the Netherlands. This is the reason why the furniture in the upper rooms formerly lived in by Wilhelm II and his consort Empress Augusta Viktoria comes from elsewhere. 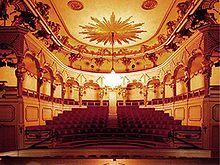 Occupying two levels above the ground floor, the Theatre dates to the Frederick the Great’s reign in the eighteenth century and is still in use today. Rococo in style, the theatre makes heavy use of red and white with gilded accents. It can be seen as peculiar given its location within a palace, for the theatre lacks a royal box in which a king may view a performance. Instead, Frederick would sit among his guests in the third row of seating from the stage. The seat rows, which are curved, are reminiscent of an amphitheatre in antiquity. The Theatre is fitted with modern stage equipment which is discreetly placed to preserve the rococo décor. 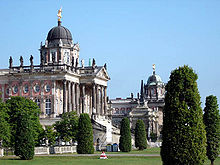 Opposite to the palace’s westward-opening court of honour are the Communs, designed by Carl von Gontard and Jean Laurent Le Geay. Styled in the same manner as the palace itself, the two buildings housed the royal kitchens, utilities, gardeners’ shops, palace guards and servants. Between the two buildings stretches a curved colonnade, decorated with statuary and obelisks, which acted as a state entrance and as a screen to shield the view of the marshlands beyond. In 1896, Wilhelm II had an underground tunnel constructed to allow passage between the palace and the Communs, avoiding possibly inclement weather. The curved staircases, domes, pilasters and columns do not show the practical purpose of the buildings. Today, the buildings are used by the University of Potsdam and are undergoing restoration although a lack of funding has pushed the date of completion to 2016. The twenty-nine acre parcel has been closed off to the public and is not longer viewable by tourists.

The New Palace, lying at the western end of the Sanssouci royal park, is located on a main axial avenue. At the time of its construction, the palace was located in an expansive baroque park area. Today, the area of the palace park within proximity to the New Palace is laid out simply with pathways, statuary, fountains and greenery. Nearby are the Temple of Friendship and the Antique Temple.