A fiber laser or fibre laser is a laser in which the active gain medium is an optical fiber doped with rare-earth elements such as erbium, ytterbium, neodymium, dysprosium, praseodymium, and thulium. They are related to doped fiber amplifiers, which provide light amplification without lasing. Fiber nonlinearities, such as stimulated Raman scattering or four-wave mixing can also provide gain and thus serve as gain media for a fiber laser.

The advantages of fiber lasers over other types include:

Fiber laser can also refer to the machine tool that includes the fiber resonator.

Unlike most other types of lasers, the laser cavity in fiber lasers is constructed monolithically by fusion splicing different types of fiber; fiber Bragg gratings replace conventional dielectric mirrors to provide optical feedback. Another type is the single longitudinal mode operation of ultra narrow distributed feedback lasers (DFB) where a phase-shifted Bragg grating overlap the gain medium. Fiber lasers are pumped by semiconductor laser diodes or by other fiber lasers.

Many high-power fiber lasers are based on double-clad fiber. The gain medium forms the core of the fiber, which is surrounded by two layers of cladding. The lasing mode propagates in the core, while a multimode pump beam propagates in the inner cladding layer. The outer cladding keeps this pump light confined. This arrangement allows the core to be pumped with a much higher-power beam than could otherwise be made to propagate in it, and allows the conversion of pump light with relatively low brightness into a much higher-brightness signal. As a result, fiber lasers and amplifiers are occasionally referred to as "brightness converters."

There is an important question about the shape of the double-clad fiber; a fiber with circular symmetry seems to be the worst possible design.[2][3][4][5][6][7] The design should allow the core to be small enough to support only a few (or even one) modes. It should provide sufficient cladding to confine the core and optical pump section over a relatively short piece of the fiber. 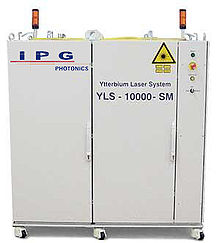 Recent developments in fiber laser technology have led to a rapid and large rise in achieved diffraction-limited beam powers from diode-pumped solid-state lasers. Due to the introduction of large mode area (LMA) fibers as well as continuing advances in high power and high brightness diodes, continuous-wave single-transverse-mode powers from Yb-doped fiber lasers have increased from 100 W in 2001 to >50 kW. Single mode lasers have reached 10 kW in CW power: "[1]"

Previously unattainable powers can now be achieved with commercially available off-the-shelf fibers and components. As a result, fiber laser technology is expected to have a profound effect on a broad variety of industrial applications. This white paper describes the technology in greater detail: "KW-power fiber lasers with single transverse mode output".

When a linearly polarized light is incident to a piece of weakly birefringent fiber, the polarization of the light will generally become elliptically polarized in the fiber. The orientation and ellipticity of the final light polarization is fully determined by the fiber length and its birefringence. However, if the intensity of the light is strong, the nonlinear optical Kerr effect in the fiber must be considered, which introduces extra changes to the light polarization. As the polarization change introduced by the optical Kerr effect depends on the light intensity, if a polarizer is put behind the fiber, the light intensity transmission through the polarizer will become light intensity dependent. Through appropriately selecting the orientation of the polarizer or the length of the fiber, an artificial saturable absorber effect with ultra-fast response could then be achieved in such a system, where light of higher intensity experiences less absorption loss on the polarizer. The NPR technique makes use of this artificial saturable absorption to achieve the passive mode locking in a fiber laser. Once a mode-locked pulse is formed, the nonlinearity of the fiber further shapes the pulse into an optical soliton and consequently the ultrashort soliton operation is obtained in the laser. Soliton operation is almost a generic feature of the fiber lasers mode-locked by this technique and has been intensively investigated.

Semiconductor saturable absorbers were used for laser mode-locking as early as 1974 when p-type germanium is used to mode lock a CO2 laser which generated pulses ~500 ps . Modern SESAMs are III-V semiconductor single quantum well (SQW) or multiple quantum wells grown on semiconductor distributed Bragg reflectors (DBRs) . They were initially used in a Resonant Pulse Modelocking (RPM) scheme as starting mechanisms for Ti:Sapphire lasers which employed KLM as a fast saturable absorber . RPM is another coupled-cavity mode-locking technique. Different from APM lasers which employ non-resonant Kerr-type phase nonlinearity for pulse shortening, RPM employs the amplitude nonlinearity provided by the resonant band filling effects of semiconductors . SESAMs were soon developed into intracavity saturable absorber devices because of more inherent simplicity with this structure . Since then, the use of SESAMs has enabled the pulse durations, average powers, pulse energies and repetition rates of ultrafast solid-state lasers to be improved by several orders of magnitude. Average power of 60 W and repetition rate up to 160 GHz were obtained . By using SESAM-assisted KLM, sub-6 fs pulses directly from a Ti: Sapphire oscillator was achieved . A major advantage SESAMs have over other saturable absorber techniques is that absorber parameters can be easily controlled over a wide range of values . For example, saturation fluence can be controlled by varying the reflectivity of the top reflector while modulation depth and recovery time can be tailored by changing the low temperature growing conditions for the absorber layers . This freedom of design has further extended the application of SESAMs into modelocking of fiber lasers where a relatively high modulation depth is needed to ensure self-starting and operation stability. Fiber lasers working at ~ 1μm and 1.5μm were successfully demonstrated. .[8][9][10][11][12][13]

Graphene is a one-atom-thick planar sheet of sp2-bonded carbon atoms that are densely packed in a honeycomb crystal lattice. Optical absorption from graphene can become saturated when the input optical intensity is above a threshold value. This nonlinear optical behavior is termed saturable absorption and the threshold value is called the saturation fluency.[citation needed] Graphene can be saturated readily under strong excitation over the visible to near-infrared region, due to the universal optical absorption and zero band gap.[14] This has relevance for the mode locking of fiber lasers, where wideband tunability may be obtained using graphene as the saturable absorber.[15] Due to this special property, graphene has wide application in ultrafast photonics.[16][17][18] Furthermore, comparing with the SWCNTs, as graphene has a 2D structure it should have much smaller non-saturable loss and much higher damage threshold. Self-started mode locking and stable soliton pulse emission with high energy have been achieved with a graphene saturable absorber in an erbium-doped fiber laser.[19][20][21] Atomic layer graphene possesses wavelength-insensitive ultrafast saturable absorption, which can be exploited as a “full-band” mode locker. With an erbium-doped dissipative soliton fiber laser mode locked with few layer graphene, it has been experimentally shown that dissipative solitons with continuous wavelength tuning as large as 30 nm (1570–1600 nm) can be obtained.[22]

Active mode-locking is normally achieved by modulating the loss (or gain) of the laser cavity at a repetition rate equivalent to the cavity frequency, or a harmonic thereof. In practice, the modulator can be acousto-optic or electro-optic modulator, Mach-Zehnder integrated-optic modulators, or a semiconductor electroabsorption modulator (EAM). The principle of active mode-locking with a sinusoidal modulation. In this situation, optical pulses will form in such a way as to minimize the loss from the modulator. The peak of the pulse would automatically adjust in phase to be at the point of minimum loss from the modulator. Because of the slow variation of sinusoidal modulation, it is not very straightforward for generating ultrashort optical pulses (< 1ps) using this method.

For stable operation, the cavity length must precisely match the period of the modulation signal or some integer multiple of it. The most powerful technique to solve this is regenerative mode locking i.e. a part of the output signal of the mode-locked laser is detected; the beatnote at the round-trip frequency is filtered out from the detector, and sent to an amplifier, which drives the loss modulator in the laser cavity. This procedure enforces synchronism if the cavity length undergoes fluctuations due to acoustic vibrations or thermal expansion. By using this method, highly stable mode-locked lasers have been achieved . The major advantage of active mode-locking is that it allows synchronized operation of the mode-locked laser to an external radio frequency (RF) source. This is very useful for optical fiber communication where synchronization is normally required between optical signal and electronic control signal. Also active mode-locked fiber can provide much higher repetition rate than passive mode-locking. Currently, fiber lasers and semiconductor diode lasers are the two most important types of lasers where active mode-locking are applied.

In the non-mode locking regime,the first dark soliton fiber laser has been successfully achieved in an all-normal dispersion erbium-doped ﬁber laser with a polarizer in cavity. Experimentally finding that apart from the bright pulse emission, under appropriate conditions the ﬁber laser could also emit single or multiple dark pulses. Based on numerical simulations we interpret the dark pulse formation in the laser as a result of dark soliton shaping.[23] 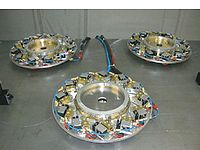 Another type of fiber laser is the fiber disk laser. In such, the pump is not confined within the cladding of the fiber (as in the double-clad fiber), but pump light is delivered across the core multiple times because the core is coiled on itself like a rope. This configuration is suitable for power scaling in which many pump sources are used around the periphery of the coil.[24][25][26][27]