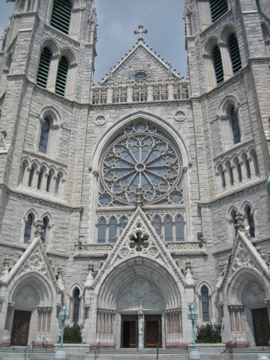 country =
phone =
website = The Cathedral Basilica of the Sacred Heart is the seat of the Archdiocese of Newark, New Jersey. It is located at 89 Ridge Street in Forest Hill, next to . Envisioned as a "fitting monument to the faith," the Cathedral was begun in 1899 and finished in 1954. The original design called for an English-Irish gothic church, but plans were later modified in favor of a French gothic aesthetic, which included elaborate rose windows, sculpture by the doorways, and shorter towers.

Planning of the Cathedral

in 1896 but was rejected by Bishop Wigger. As the plans moved on, Bishop Wigger erected a temporary church under the same name on February 15, 1889. In July 1897, a fundraiser was started to get some funds to build the cathedral. At the same time, the design was being chosen. O'Rourke was chosen to design the cathedral. The design was to be an English-Irish gothic design. In accepting the commission, O'Rourke pledged to Bishop Wigger that the work would be "a labor of love and not of fees and profits."

Groundbreaking of the site happened on January 1898 and the cornerstone was laid on June 11, 1899. O'Rourke wanted to get the walls and towers built first and selected a Vermont Rockport granite as the exterior stone. By 1902, the walls then stood 50 feet high at the nave and ambulatory locations, with the first four tiers of the front towers under construction. Bishop Wigger died on January 5, 1901 and handed the project to the new bishop, John O'Connor. Bishop O'Connor asked O'Rourke to cut costs as much as possible and not exceed the price tag of $1,000,000 (in 1902 dollars). In the beginning of 1902,

O'Rourke was removed from being head arcitect of the church in 1910 due to a series of feuds between O'Rourke and another architect. The new architect, Mr. Waldron noticed at dangerous shift in weight and hired Fred Metcalf to observe this shift. An order went out to remove all 24 pillars in the cathedral and excavated underneath and re-leveled the ground and reseted 22 pillars. The decision to drop the two remaining pillars allowed him to eliminate the clerestory wall connecting the nave and the chancel, thus opening the transept the full one hundred sixty-five feet. As the arches and clerestory began to rise in the latter half of 1910, extra reinforcement was provided in the form of steel girders at the clerestory level down either side of the nave and around the ambulatory.

The cathedral's design was switched from the English-Irish gothic style to a French gothic style. The plans were then accepted in June 1913 with work starting in August of the same year. Changes included the reduction of the size of the front towers to 232 ft tall from the previous 332 ft. The pointed spires were removed of fear of too much weight on the tower. Other design changes included the elimination of the exterior nave buttresses and pinnacles, the substitution of three rose windows instead of the concentric circle design and increased the use of sculptures at the entrances.

After nearly 95 years of planning and building, the Cathedral of Sacred Heart was finally dedicated by Archbishop Boland on October 19, 1954. Archbishop Boland dedicated Newark's mighty Cathedral in a ceremony in which he also received the pallium from Archbishop Amleto Cicognani, Apostolic Delegate to the United States. Monsignor Joseph A. Doyle, who spent his entire priestly life in the Cathedral parish, was appointed first rector. Over many years, the cathedral became a center of faith. Archbishop Boland ordained six bishops, many priest in this cathedral and showed people's contributions in this church. In 1972, thousands came to celebrate the Archbishop's golden jubliee. In 1974, he named his successor here, Fr. Peter L. Gerety from Portland, Maine.

*This church is the fifth largest cathedral in the United States
* Sacred Heart was elevated to status by when he visited the cathedral in 1995.
*The Cathedral holds concerts open to the public throughout the year.
*The actual carving of the medallions' scriptural scenes and bishops' portraits took place on the Cathedral property between April, 1922 and November, 1924 under the direction of Rochette and Parzini of New York.
*The Cathedral holds the largest Schantz pipe organ ever built, including 154 ranks playable from two massive consoles.