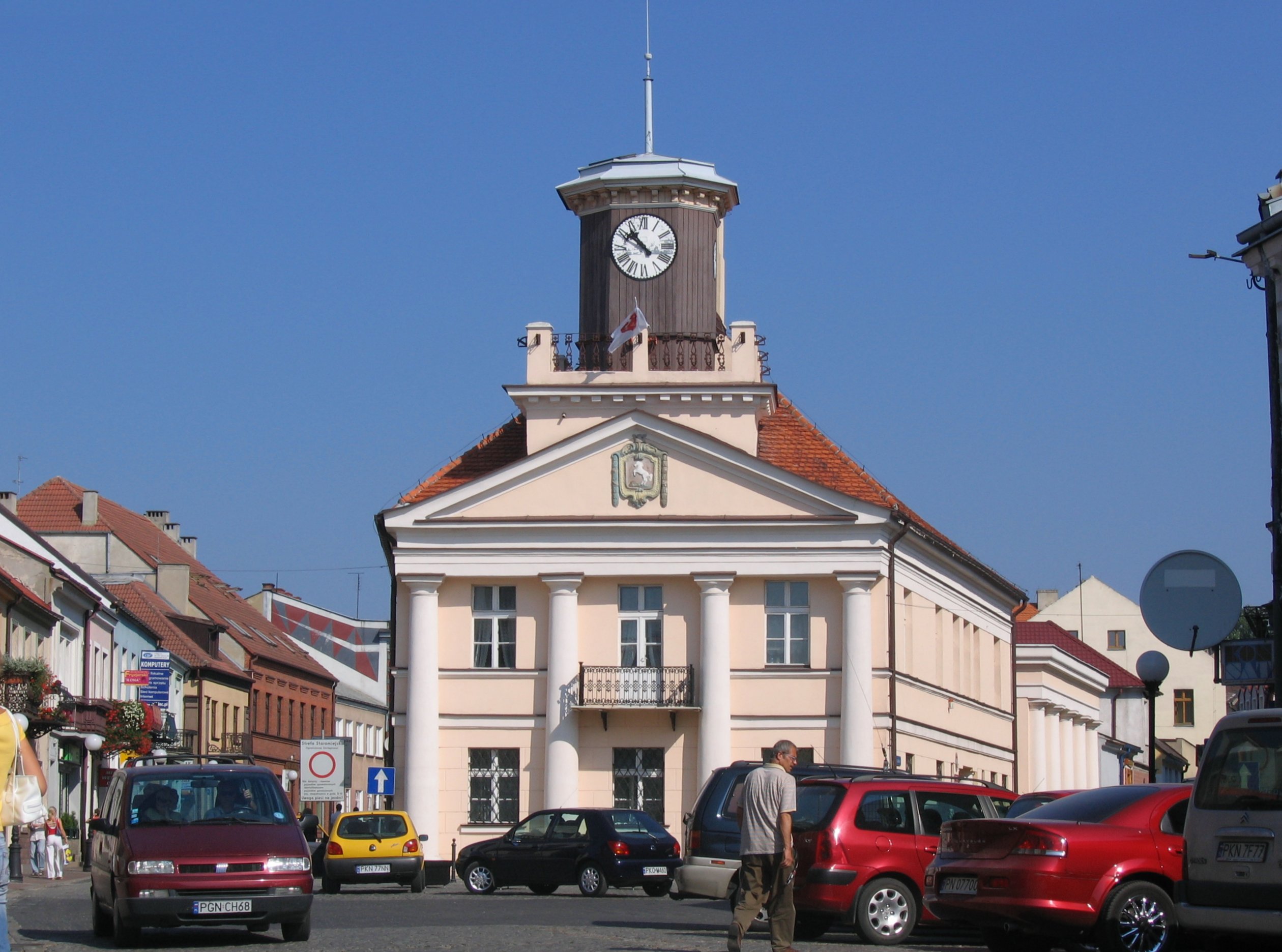 The beginnings of settlements near the Konin town goes back to ancient history connected with European Amber Route leading from The Roman Empire territory to the Baltic Sea through Konin. Though there were no settlements called 'Konin' at that time, valuable record about the place remained on map drawn by Ptolemeus's Auskaukalis(Alexandrian geographer). The place named Konin was described as 'Setidava'(or 'Getidava') there, and indicated probably the wading place in Warta river and 'emporium'(trading point)- probably quite important place to merchants travelling along Amber Route (information derived from 'Kalisz-Konin on The Amber Route' written by Krzysztof Gorczyca).

In the 17th century, epidemics, fires and war with Sweden provoked the decline of the town. In 1815, with the dissolution of the , Konin was returned in the controlled by . In 1863, the town participated in the . There is still very many monuments and crosses commemorating battles and important events of the January Insurrection in the region of Konin and in the town itself. The repression of the Tsarist authorities was severe and the town went on to fear the statue of the Regional Centre for a long time.

The economic situation of the town did not improve when Poland regained its independence in 1918. The living conditions of residents were miserable. There was no network for distribution of water, and no sewers. The town did not benefit from the . The inter-war econonomic crisis was harshly felt. The situation did not begin to improve until the "désenclavement" of the town, thanks to the opening of the Poznań-Warsaw "steel-tipped route (railway?)" and the construction of the canal in the lake which relied on the Warta River, which borders the town.

During the , Konin was part of the land annexed by (""). In the town's surrounding forests, the Nazis carried out mass executions of Poles, mostly . Jews had represented 30% of Konin's population prior to the war. A descendant of Konin Jews, Theo Richmond, wrote "Konin: A Quest", the most extensive history of Jewish life in the town ever to appear in English. The majority of Jews in Konin were , though two small communities of lived within the Konin Jewish community, mostly adherents to Gerer Hasidism, with a small group of Aleksander Hasidim. [Theo Richmond, "Konin", p.209]

The town of Konin is situated in the east part of Greater Poland region. Konin County (Powiat Koninski) represents virtual abundance and wealthy of that part of Poland. We can establish a general division here into two main groups:

There is short list of main historical monuments of Konin town itself put in order according to architectural epochs:

*Romanesque - 1. Famous, oldest Polish mile stone made of local sandstone from village. It is well known as . It was founded in 1151 AD by duke or . There are magnificent examples of Romanesque inscription and letters themselves carved on it. According to some scholars and hypotheses the mile stone had been earlier Celtic sculpture. 2. St Bartholomew's parish church was rebuilt in the second half of XIV-th century, but Romanesque remains are still visible in external walls, especially in the north wall. They are dressed stones made of sandstone and massive stone cross built-in in the wall as well.

*Gothic - 1. St Bartholomew's parish church is most beautiful example of Gothic architecture and art in Konin. There are beautiful, gothic net and stellar vaults inside the church and stained glasses in the chancel. 2. St Andrew's church in the north district of Konin called is a precious example of rural, Gothic church having unique view of Greek cross. The building has got a rare fan vault with the only sand-stone column in the middle of the floor. The sand stone bosses and other details are richly carved. In the external walls there are a few coats of arms built-in. 3. Mediaeval Castle in - at present Regional Museum of Konin was built by in 1418-1426. I was adjusted well to defence with the use of fire-arms.

* - 1. Late, Renaissance chapel of () in the St. Bartholomew's parish church - was local physician, Renaissance man and well known member of the Middle class in Konin and as well. 2. The former house of () in the Plac Wolności. The house was refurbished completely many a time since the age of but we can still see there amazingly thick wall on the ground floor (1,2 m) and the main hall with the original barrel vault in it.

* - 1. St. Bartholomew's parish church with Manneristic, magnificent, architectural tombstone of on the north wall of the main nave seems to be the most characteristic example of local Mannerism. 2. in chapel of (} there are impressive, wooden stalls with inlaid work. They are rare example of Manneristic furniture.

* - 1. St. Bartholomew's parish church - wall crucifix above the entrance to the porch on the north wall of the main nave and main altar in chapel of (}

* - 1. The Town Hall from the very beginning of XIX-th century with beautiful façade encompassing four, tall Toscany Columns and large pediment on them. Above the pediment there is also little tower there (partly made of wood) with the tower clock and tall flag-staff as well. 2. The Old Town with many classicist tenement-houses and former bucher's shops by the town hall. 3. Municipal Council Building on the north wall of Plac Wolności. 4. Presbitery of Lutheran church of Holy Ghost is, in fact, classicist manor-house surprisingly situated in the small garden in the middle of the Old Town of konin.

*XIXth and XXth century - 1. St Bartholomew's parish church has got Neogothic main altar made of wood with many Neogothic statues on it. 3. St Andrew's church in the north district of Konin is also, apart from old, Gothic parts and details, thoroughly refurbished according to manner. The central turret and façades of chapels are built in XIX-th century.

*XIXth and XXth century - 1. Lutheran church of Holy Ghost from 1856 (rebuilt in 1901-1915, 1981-1985) can be great example of in Konin. It is built of the dark brick with massive main tower coverad with spire, many, decorative architectonical deatils and complete equipement of the interior from the XIXth and the beginning of XXth century. Apart from architecture, the church itself constitutes magnificent link to unique history of . It's worth to be noticed that as a result or at the end of XVIIIth and splitting the country in three parts divided between three, Polish neighbours, in XIXth century region of Konin became a part of (unlikely to the rest of being itself the part of ). Because of those Russian connections we have splendid opportunity to observe in architecture of some buildings in Konin reminiscences of architecture of Russian Orthodox Churches. There are at least two churches in Konin where those far reminiscenses are visible - one of them it is Lutheran church of Holy Ghost being just at issue. 2. St. Adalbert's church in district - the church itself was built in XVIIIth century (on the site of previous, probably wooden, smaller church and churchyard) but at the very beginning of XXth century it was completely refurbished, enlarged and changed. In result impressive, large temple was created with tall main tower and high spire on it. The brick walls was plastered. This is the second church in Koninm being under the slight influence of Russian Orthodox Churches' architecture. 3. Many tenement-houses in Old Town of Konin have eclectic façades encompassing features of almost all, known architectural manners and styles. 4. Very interesting example of in Konin is set of ex-Jewish buildings, namely synagogue, ritual baths and Talmudic school house. Buildings were built in the XIXth century and synagogue itself is considered as one of the most beutiful buildings of this kind in . It was erected in 1832, then enlarged and renewed in 1883. South façade refers to history of and comprises of mix of architectural styles with predominance of and . North façade is more composed and simple and refers mainly to with its huge pediment. 5. Gypsys' palaces in Stodolniana Street and Europejska Street with impressive onion-like domes, sculptures or shaped as if mediaevel castles in miniature and richly embellished are themselves very characteristic examples of in Konin. They were built at the very end of the XXth century mainly in 80s and 90s and are, so to speak, phenomena on the background of town constituting quite separate category of town's residences and villas.

* - Modernism in Konin we can divide into two periods - Prewar (1920-1939) and After-war (1945 - up to 60s)
*Prewar in Konin is represented by quite a good deal of tenement-houses but let us emphasize here significance of two of them: 1. Tenement-house in Szarych Szeregów street no.1 – This is impressive, renewed of last building with distinguished facades and breathtaking, terrific history. It was built in 1930s by local MP, after the outburst of II World War and defeat of during the painful in 1939, there were offices of (Secret State Police of Nazi Germany) located in this house. Building had an ill name because of torturing of prisoners being held in here. After 1945 in the very same building there were offices of (Communist Secret State Police) and ill name of the place went on. Nowadays there are private apartments in the building. 2. Tenement –house in 3 Maja street no. 48 – This is also good example of prewar Modernism in Konin. There is The Guild of Handi-Crafts () situated there and various kinds of shops as well. .
*After-war in Konin encompasses beautiful and precious examples of architecure being situated in, so called, The New Konin, that is to say newly built districts northwards from the Warta river. 1. Town's Library (Miejska Biblioteka Publiczna - abbr.MBP) - Dworcowa street no.13 is best example of that what we deal with right here. This is truly bulk having elaborated architectonical shape with its perpendicular ribs of concrete dividing windows into narrow quarters - black and white as main colours of building and deep green of greenery around it together with precisely cuboidal massive creates unique impression,indeed. The building is open to the public as library,entrance is free and visiting it is a game worth a candle not only because of books,bit because of architecture of the interior as well. Before the building was taken over for granted by the library, a branch of National Bank of Poland (Narodowy Bank Polski- abbr.NBP) took place in here. 2. Former building of CENTRUM department store (nowadays Dino supermarket)in Dworcowa street is interesting exmple of architecture as well. The profile of its facade is curved a little and lifted up with huge window. It stands on two, solid concrete pillars and there are additiona shop windows for the exposition on the ground flor below protruding massive of facade. up to 1990s it was the most known and representative building in Konin.

In Konin County(Powiat Koninski) there are remains, traces and monuments of many national minorities living in Poland in the course of history, namely:
, , , , , , so called . (Information about Scots derived from lectures given in Miejska Biblioteka Publiczna by Mr. Jerzy Łojko)

* - Meetings of members and lovers of PTTK Konin take place every Thursday after 6.30 p.m. in a base (except holidays on, as it follows: 1-3 May, 15 August, 1 November, 11 November, 25-26 December, 1 January. With regard to changeable holidays e.g. Easter and Boże Ciało, please contact Polish Embassy at your place to get information about the dates). The address of the base: ul. Kolejowa 11 (Kolejowa Street no. 11), 62-510 Konin, Poland.