The A. Alfred Taubman College of Architecture and Urban Planning (also Taubman College) is an undergraduate and graduate institution for the built environment at the University of Michigan. Formerly known as the College of Architecture and Urban Planning, Taubman College gained the namesake of real estate developer and philanthropist A. Alfred Taubman when he donated $30 million to the college in May 1999. The gift was one of the largest in the history of the University of Michigan and the largest ever to a school of architecture.

For 2011, the college's Master of Architecture program was ranked number 1 by DesignIntelligence.[1]

In 1876, the University of Michigan became one of the first universities in the United States to offer courses in architecture, led by influential Chicago architect William Le Baron Jenney. After thirty years, a degree program within the Department of Engineering was established in 1906, under the direction of Emil Lorch, who served to administer the program and its ever-evolving iterations until 1937. Housed in what is now Lorch Hall on Central Campus, the program quickly grew into the Department of Architecture by 1913. In 1923, world-renowned architect Eliel Saarinen joined the faculty of the department, with which he was associated during his design, construction, and subsequent presidency of the Cranbrook Academy of Art. By 1930, the College of Architecture had been established, and grew to become the College of Architecture and Design in 1939, introducing Landscape Architecture and, by 1948, one of the first Master of City Planning degrees. The 1940s also saw the college taking a progressive role with regards to architectural research, establishing the Architecture Research Laboratory that would pioneer the integration of design, construction, technology, planning and research. In 1965, the Landscape Architecture program moved to the university's School of Natural Resources.

In 1968, the college made history by establishing the first-ever doctoral program in architecture, fueled by a strong level of academic inquiry into the field.

In 1974, many positive changes took place for the college, including the separation of programs into the College of Architecture & Urban Planning and the School of Art & Design. During this same year, the programs outgrew their home on Central Campus and found a new home on North Campus, the Art and Architecture Building, in which both schools remain to this day. 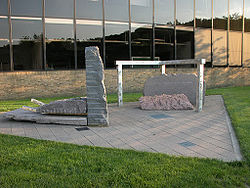 Köszönöm, a monument at Taubman College in honor of alumnus Raoul Wallenberg.

The UG option, as it is known by the college, is a 60 credit hour track which is completed in the junior and senior years of the students' undergraduate career. The freshman and sophomore years are focused primarily on pre-architecture and general education coursework, typically within the College of Literature, Science, and the Arts, after which students transfer into the architecture program. Focus is placed on introducing students to the skills, knowledge and perceptions of various architectures in relation to their greater environment. The program is not a professional degree, and is not accredited by the NAAB, however students often do decide to continue into a professional Master of Architecture program.

As the flagship program of Taubman College, the Master of Architecture degree promotes a progressive, multidisciplinary study of design in the context of the relationship between people and their surrounding environments. The rigorous curriculum explores the richness of these environments in great detail, and allows students to choose from a variety of interests and topics to develop an understanding of architecture that is equally as rich. As a program accredited by the NAAB, focus is placed on professional development with respect to licensed architectural practice, though students have been known to choose relevant career tracks beyond these particular confines. With more than 200 students, it is the largest Master of Architecture program in the country. [2]

The Master of Architecture curriculum follows two tracks, for which students will qualify based on their undergraduate background:

The Master of Science degree in architecture is a 2.5 semester, 32 credit hour, research-based post-professional program that develops a foundation of academic knowledge for the pursuit of post-professional degrees in related fields. The degree typically culminates in an independent research project which is geared towards a focus in building and environmental technology, design studies, or architectural history and theory. It is affiliated with the Doctoral Program in Architecture and administered under the Horace H. Rackham School of Graduate Studies, the main graduate education and research arm of the University of Michigan.

Though the program is currently non-studio based, a curriculum is being developed to add a studio/design based research track. This track would be offered in addition to the current tracks, and is being implemented as a dual-degree with the Master of Architecture program.

The Doctoral Program in Architecture is designed for students who are interested in pursuing an intensely academic study of architecture that builds on an extensive body of research already established in the university. These bodies of research include, but are not limited to: building technology, design studies, and history + theory. The emphasis of the program is on interdisciplinary research and collaboration in the development of a dissertation thesis.

The two-year MUP degree offers a broad curriculum that is accredited by the Planning Accreditation Board, an organization sponsored by the American Planning Association, the American Institute of Certified Planners, and the Association of Collegiate Schools of Planning. One-third of the curriculum is devoted to developing a wide range of knowledge on the field of planning, while the other two-thirds develop a more specific knowledge base in land use and environmental planning, housing, community and economic development, planning in developing countries, physical planning and urban design, and transportation planning. Students are also encouraged to incorporate courses outside Taubman College, and concurrent degree programs are also encouraged.

The Doctoral Program in Urban + Regional Planning is designed for students who are interested in pursuing an intensely academic study of the built environment that builds on an extensive body of research already established in the university. These bodies of research include, but are not limited to: transportation planning, community development planning, regional planning, and environmental planning. The emphasis of the program is on interdisciplinary research and collaboration in the development of a dissertation thesis.

The Certificate in Real Estate Development is a 17 credit hour, interdisciplinary program that provides students with a greater awareness of the issues associated with urban development, charging the developer with a great amount of social responsibility. Classes in business, law, urban and regional planning, natural resources and environment, landscape architecture, architecture, urban design, and engineering are integrated into a rather critical, though incredibly relevant perspective on development. This highly selective program is offered in conjunction with the Law School and the Stephen M. Ross School of Business to any graduate student enrolled at the University of Michigan.

The MUD program is a one year, 39 credit hour, post-professional degree program which accepts students from backgrounds in architecture, urban planning and landscape architecture. Though the curriculum takes root in the understanding of widely varied environments and habitats of human existence, the program is also highly influenced, unlike the architecture program, by the variety of principles and practices associated with the movement known as new urbanism.

Taubman College's graduate and undergraduate programs in architecture are consistently considered among the most prestigious and most admired in the country. In its 2009 edition of "America's Best Architecture & Design Schools", the Design Futures Council journal DesignIntelligence ranked the Master of Architecture program 9th in the nation. For 2011, the program rose to 1st, overtaking the Harvard Graduate School of Design, which had held the spot since DI began ranking M.Arch programs individually in 2004.[1] In this survey, Taubman College's M.Arch program was also rated the 5th most admired by school deans, and fared well in the following skills areas:

The school's dramatic rise was attributed to recent administrative and curriculum changes that have focused on upending a centuries-old pedagogical model still taught at most schools. Changes have included making ancillary coursework more integral to design studio curriculum, and fostering hands-on research and development as permeating the discipline at all levels, from analysis, to design, to communication.[1]

Programs in urban design and urban planning were recently ranked 6th and 11th in the nation, respectively, in Planetizen's 2007 Guide to Graduate Urban Planning Programs. The urban design program was also recognized by New Urban News as the 4th best program in the nation for new urbanism.[2]

Taubman College is located on the University of Michigan's North Campus in the Art & Architecture Building (A&AB). This building houses the largest academic studio in the world [3], at 30,000 continuous square feet, for roughly 450 undergraduate and graduate architecture students and graduate urban design students.

In 2007, Taubman College announced plans to spend $13 million to build a 16,000-square-foot (1,500 m2) addition to its building on North Campus. In that year the Board of Regents authorized the hiring of the Seattle-based architectural firm The Miller Hull Partnership. The addition will be built on the roof of the south wing of the existing A&A Building, creating a new face for the college. It will provide additional space to accommodate increased student enrollment and to improve the teaching and learning environment, including expanded faculty offices, more instructional space, a centralized reading room, a green roof, and additional energy-efficient features. [4] As of September 2008, the project had been put on hold, pending a re-evaluation process put forth by new Dean Ponce de Leon.

Many architecture students initiate design-build projects to help improve the appearance of the academic space and quality of life for the student body. Projects designed and built by the students range from tables and chairs, to exhibition space, to classroom renovations, student and faculty lounge renovations, and even the design for a print, copy and supplies store (called the Media Center). Many of the larger-scale projects, such as the award-winning student lounges and the Media Center, are a collaborative effort amongst students, practicing faculty members, and contractors.

Students are exposed to significant travel opportunities throughout their time at Taubman College, M.Arch students are offered a program in Florence, which takes place in the fall semester of the final year, to which about 15 students attend. The program is administered by the University of Michigan, however students from the University of Wisconsin–Madison and Duke University also participate, residing in the historic Villa Corsi-Salviati outside the city. In addition, summer studios have recently been offered by faculty members to Argentina, Brazil, China, France, Ghana, Guatemala, Iceland, India, Italy, Japan, and Switzerland.

In 2005, partners Robert Mangurian (SCI-Arc faculty) and Mary Ann Ray (Taubman College + SCI-Arc faculty) established a permanent study outlet in Beijing, called the Beijing Architectural Studio Enterprise (B.A.S.E.), to which Taubman College and SCI-Arc students frequent during the spring and summer months. Located in the northeast, along the 5th Ring Road in the emerging arts district of Caochangdi Village (adjacent to the well-known Dashanzi Art District), B.A.S.E. is an independent institution which is supported by a network of institutions and individuals in China and the United States, and offers academic opportunities for international and local architecture enthusiasts alike.

Taubman College offers a variety of faculty fellowships and visiting professorships. These opportunities have brought some of the smartest young minds together with some of most renowned individuals of the academy and practice of architecture. The visiting professorships are endowed in the name of Eliel Saarinen, Charles Moore, Max Fisher, and Colin Clipson, and have attracted the following notable individuals:

The Dimensions series is a student-designed and produced journal of student and faculty work, including M.Arch theses as well as submissions by and profiles of practicing architects.

The college celebrated its centennial in 2006-2007, with a variety of local, national and international events to both celebrate and reflect on the history of the school, as well as posit new trajectories for the future. Some of the many events included: