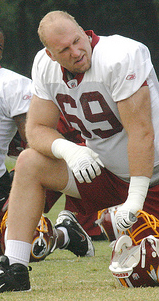 Jason T. Fabini (born , in Fort Wayne, ) is an for the of the . He was originally drafted by the in the fourth round of the . He played at Cincinnati.

Fabini has also played for the in his career.

Fabini attended the and was a three-time All- selection.

He was originally selected in the fourth round of the by the , and head coach .

On March 26, 2007, Fabini signed a one-year deal with the Washington Redskins. He re-signed with the team exactly one year later.