A Little Less Sixteen Candles, a Little More "Touch Me"

A Little Less Sixteen Candles, a Little More "Touch Me" 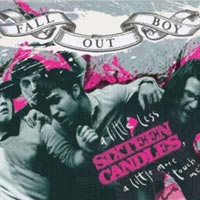 The song was originally titled "A Little Less Molly Ringwald, a Little More Samantha Fox". is an actress who starred in the 1984 movie "", referenced in the final song title. "Touch Me" is a reference to the hit song by .

[http://www.youtube.com/watch?v=Y-VifE8EK8w The video] , directed by Alan Ferguson, features the band members acting as a team of vampire hunters trying to fend off a gang of attacking their town. It ends with a climactic showdown between the band and the vampires, resulting in Wentz being arrested and his subsequent realization that all the police officers are also vampires. Many of its scenes are parodies from various horror films; for example, the opening scene is a take-off from the cult-classic film, "" and the video's style is similar to that of the "Blade" films.

The video features cameos from members of several bands and people associated with Fall Out Boy. They include:

The Dandies, the vampire gang with the derby hats, are partially inspired by Alex DeLarge and his droogs from "", while the other vampires are similar to David and his vampire gang from "".

The guitar riff heard at the beginning of the video when Patrick is writing in his book is from their song, " Slump or Comeback of the Year".