Oregon's 2006 statewide election included a May 16 primary election and a November 7 general election.

Ten statewide ballot measures were on the November ballot.

The following offices were up for election: Governor, Supreme Court Position 6 (to succeed Wallace P. Carson, Jr.), and numerous seats in the state legislature (House of Representatives and Senate), the state Circuit Courts, and the District Attorney's offices.

Offices that were uncontested, or local to various towns, counties, or regions, were also on Oregon ballots. Such races are not listed on this page.

For partisan offices (such as the state legislature and governor's races), major parties (Democratic and Republican) run candidates in the Primary to select their nominee for the General Election. (The state takes on the administrative and financial burden of primaries for the two major parties, while other parties determine their candidate according to whatever nominating process they choose.) A plurality (that is, more votes than any opponent) is sufficient for a major party candidate to win nomination; candidates need not get more than 50% of the vote to advance to the General Election.

Non-partisan offices (such as judges, district attorneys, and superintendent) may be filled in the Primary, if any candidate wins a majority of the vote. If no candidate wins over 50% of the vote, however, the top two vote-winners will face each other in a runoff in the November General Election.

County governments conduct the elections. Immediately after an election, their web sites[1] are the best place to find accurate election results. The Secretary of State's office posts official results 30 days after an election.

All five of Oregon's federal congressional districts in the U.S. House of Representatives were up for election in 2006. All incumbents (four Democrats, one Republican) won re-election.

Neither of Oregon's US Senate seats was up for election in 2006.

Current US Senators for Oregon:

In the bicameral Oregon Legislative Assembly, each of the 30 Senate districts is composed of exactly two House districts. Detailed district boundaries may be found at the Secretary of State's web site.[2][3][4][5]

Oregon State Senators serve four year terms without term limits. Their terms are staggered so that only half of the Senators are up for re-election every two even-numbered years.

The Rebublicans lost one seat in the State Senate, because Senator Westlund, although not up for election, switched first to non-partisan Independent to challenge for the Governor's seat, then withdrew from that race and re-registered as a Democrat, gaining the Democrats one seat. The Democrats, however, also lost Senator Gordly, who was not up for election either, but she re-registered as a non-partisan Independent. Outside the party changes by these two individual Senators, no other seats in the Senate shifted party as a result of the election, although three incumbents declined to run for various reasons and another lost his primary.

Candidates for the Oregon Senate[7] and House[8] are listed in the chart below. House districts are listed next to the Senate district to which they belong (rather than listing the Senate and House in separate charts.) The counties covered by each Senate district are listed in italics, with (parentheses) if the county extends into other districts. Box colors indicate party affiliation for both incumbents and General Election winners (light blue for Democrats, light red for Republicans). Names and statistics of General Election winners are also boldfaced.

Commissioner of the Bureau of Labor and Industries winner in primary:

Many judicial positions are not contested. Incumbents are rarely opposed, and when they resign, it is often timed such that the Governor chooses their replacement.[11]

(Several seats with only one candidate will be on the ballot, for the Court of Appeals and Circuit Courts. Such races are generally not listed on this page.)

Oregon has 26 State Court districts. Most of them are a single county, but several include multiple counties.

Info on each district:

Most races for District Attorney were probably decided in the May Primary election. Please see the relevant County Election office results for the most accurate information. 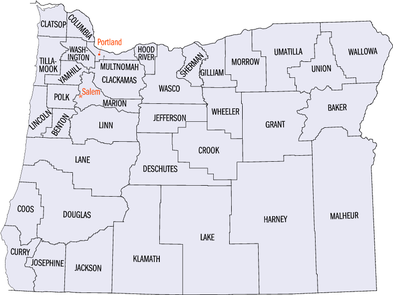 Election websites from The Oregonian: