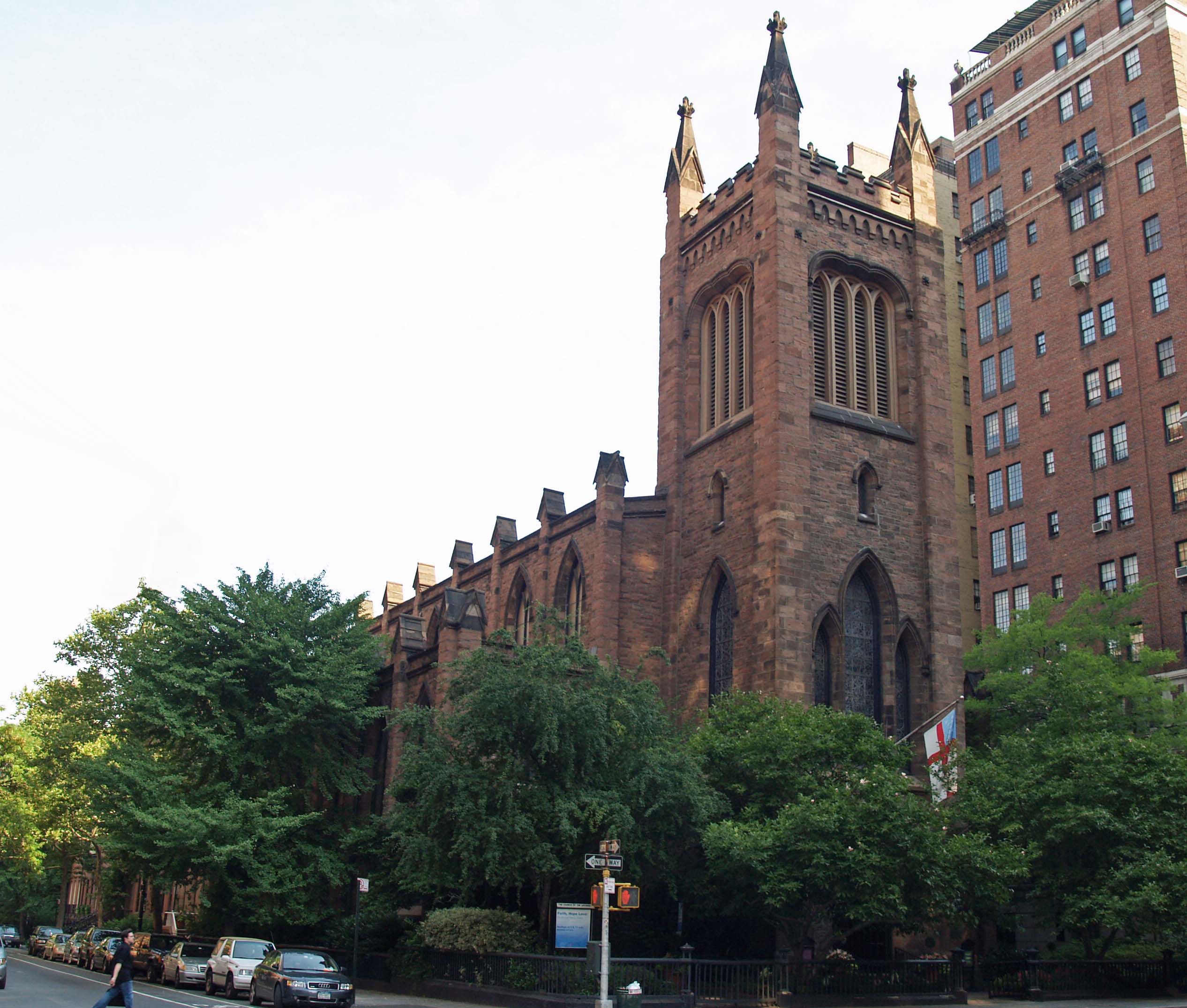 caption =
location = , , NY
nearest_city =
lat_degrees = 40 | lat_minutes = 44 | lat_seconds = 1.3| lat_direction = N
long_degrees = 73 | long_minutes = 59 | long_seconds = 46.2 | long_direction = W
area =
built = 1841
architect =
architecture =
designated = , The Church of the Ascension () is an Episcopal church in the Diocese of New York, located at and Tenth Street in 's historic neighborhood. From an austere beginning as a bastion of the evangelical movement it has become internationally known for its art, music, and liturgy. From a church with rented pews and a mostly affluent, homogeneous congregation, it has evolved into a parish of diverse people whose economic circumstances vary widely.

The first church, a small white Greek Revival building on Canal Street, was consecrated in 1829 and, after a decade of growth for the parish, was destroyed by fire. Little time was spent in lamentation. Within a month, the vestry selected the present site on Fifth Avenue and Tenth Street for a new church, to be designed by . The new Gothic Revival building was consecrated on November 5, 1841, the first church on Fifth Avenue. The site was considerably north of the city's population center, when Fifth Avenue was only an unpaved trackway, terminating in a board fence at Twenty-third Street.

After serving for fifteen years as rector, was chosen to become the Assistant Bishop of Massachusetts. (The Church of the Ascension has had only 11 rectors in its 170 years, four of whom became bishops in the Episcopal Church.)

From its earliest days, the church has been the setting for many notable events, including the marriage of President and Julia Gardiner in 1844. Many such prominent New Yorkers as , William B. Astor, Frederick de Peyster and William C. Rhinelander have been parishioners.

Demonstrations of social concern appeared early in the church. Between 1843 and 1859 the sum of $225,000 was donated for purposes outside the parish, when the regular budget in any given year was no more than $10,000, the bulk of which came from pew rents. During this period, for example, Aspinwall Hall was given to the ; over $3,000 was contributed to relieve famine distress in ; funds to build Ascension Hall were given to in ; a fund was raised to help struggling churches in places as far afield as and ; and in New York, the Church of the Ascension was instrumental in establishing and maintaining the Five Points Day School, which sought to feed, clothe, and educate the children of one of the city's worst neighborhoods of crime, poverty, and degradation.In 1888 the women of the parish set up the St. Agnes Nursery, the first day nursery in New York City. Here the babies and young children of working mothers found shelter and protection. Like many vital and financially viable parishes, Ascension established several missions and chapels in New York, maintaining them for as long as they filled a need.

The fourth rector, the Reverend E. Winchester Donald, was a friend of many of the artists dwelling in the church's Greenwich Village neighborhood. He was convinced that beauty, which elevates the human spirit, is an appropriate setting for worship. A generous gift from the Misses Julia and Serena Rhinelander made it possible for , , and David Maitland Armstrong to transform the chancel from a bleak, bare space into a composition of the highest order, surmounted by LaFarge's great mural, The Ascension of Our Lord.

When the Reverend Percy Stickney Grant was called as rector in 1893, he said he would accept only on the condition that Ascension be made a parish of free pews. This was a radical step for an Episcopal parish to take at that time, giving up the fancied security of pew rents and depending on voluntary giving, but the vestry acceded to his demand.

An equally radical departure was suggested by the sixth rector, the Reverend Donald B. Aldrich, when he proposed to the vestry that the church be kept open at all hours of the day and night. On November 9, 1929, barely a week after the stock market crash, the central doors were opened, not to be locked again until October 1966, when a more lawless social climate made limited hours necessary. (The church is at present open weekdays from noon to 1 p.m. for prayer and meditation and at 6 p.m. most weekdays for Eucharist, as well as open for its other services.) Ascension was the first church in New York City to keep its doors open at all hours, and during the Depression homeless men slept in the pews.

The tenth rector, the Reverend Donald R. Goodness, retired in 1997, after serving in the parish for twenty-five years. During the quarter century he spent with Ascension, Mr. Goodness embraced a number of changes, both at Ascension and in the Episcopal Church at large. It was during Donald Goodness's rectorship that the celebration of the Holy Communion became the main service every other Sunday instead of once a month. His tenure saw the introduction of eucharistic vestments and a more ceremonial liturgical approach in general. When the 1979 prayer book was introduced, he embraced its multiple rites and the church continues today to celebrate the Eucharist using all six forms found in the , although it no longer worships in the traditional manner of Morning Prayer.

The eleventh rector of Ascension, the Reverend Andrew W. Foster III, came to serve the parish in 1999, after serving as rector of St. Paul's Church on Nantucket Island, Massachusetts, and earlier as the Episcopal chaplain at the and then as chaplain at Kenyon College. Since his investiture as rector, the parish has seen some updates to its liturgy in keeping with common practice throughout the Episcopal Church - underscoring the "striving for mediocrity" reflected in the liturgical practices of many churches; it continues to host a regular schedule of services of prayer and music, including one especially for college students each Sunday during the school year at 6pm.

Rectors of the parish

The present edifice at Fifth Avenue and Tenth Street is one of the earliest churches designed by the English-born architect , who was working on plans for Trinity Church, Wall Street, at the same time. The cornerstone was laid in 1840 and the church was consecrated on November 5, 1841.

In 1957, the and the New York chapter of the named the Church of the Ascension as nationally important and worthy of preservation because of its architectural value, sculpture, stained glass, and painting. In 1987, the church was declared a .,

During the years 1885-1889, the interior of the church was remodeled. Galleries on the north and south were removed. The chancel was decorated as seen today, a memorial to William C. Rhinelander and Mary Rogers, his wife, given by their daughters. The work was done by under the general direction of Stanford White [ [http://www.nr.nps.gov/writeups/87002593.nl.pdf NPS Writeup] ] .

The sculptured angels over the main altar are the work of .

The main altar and the two angels in the mosaic were done by David Maitland Armstrong.

The painting of "The Ascension of Our Lord" above the main altar is the work of John LaFarge. It was executed on canvas in place and completed in 1888. It stands in the first rank of modern mural decoration in America. John LaFarge also designed four of the stained glass windows (described below).

The Holtkamp organ was installed in 1967. It has 4,500 pipes, 67 stops, and 81 ranks distributed among the pedal, great, swell, positiv, and solo divisions. Eclectic in conception, the organ is adapted to the needs of organ literature of all periods. Its tonal quality is greatly enhanced by the excellent acoustics of the church building.

The choir stalls, designed by McKim, Mead, and White, were made by the J&R Lamb Studios. They were given in 1885 by Euphrasia Leland and Emma Leland Wesson in memory of their sisters, Louisa Leland Limbert and Adelaide Leland.

The baptismal font, by , given by the St. Agnes Society in 1891, was cleaned and repaired in 1983, when a new brass cover was designed and made by Rambusch Studios.

The eagle lectern is a memorial to the Rt. Rev. Gregory Thurston Bedell, second rector of the parish, and was given by his former parishioners in 1898.

The three panels on the front of the side altar were designed by Helen Maitland Armstrong in 1930. The wood used was taken from the sedilia formerly placed there in memory of Francis and Euphrasia Aguilar Leland.

The cross above the side altar was brought from Italy and is a memorial of Earl Hulbert Aldrich, given by the Rt. Rev. Donald Bradshaw Aldrich, D.D., sixth rector of the parish.

The pulpit, given by Meta Nielson in memory of the Rt. Rev. Manton Eastburn, first rector of the parish, was designed by Charles F. McKim and carved by Joseph Cabus in 1884.

Two paintings by Edwin H. Blashfield hang in the rear of the church. On the north aisle is "The Angel with the Flaming Sword," which was painted in Paris in 1890-1891 and shown at the Salon of 1891, at the Chicago World’s Fair of 1893, and the Pan-American Exposition in Buffalo in 1901. It was given by the artist and his wife, Grace Hall Blashfield, in 1935, in memory of the Rev. E. Winchester Donald and the Rev. Percy Stickney Grant. On the south aisle is "In the House of the Carpenter." It was lent in 1939 and became the church’s property at the death of the artist’s widow in 1947.

"(North side, from the Fifth Avenue end.)"

"(South side, from the Fifth Avenue end.)"

1. The Southworth Memorial, John LaFarge, artist. Subject: "Mary Magdelene, Joanna, and Mary the Mother of James at the Sepulchre."

3. The Leland Memorial, John LaFarge, artist. Subject: "The Presentation of Christ in the Temple."

3. The Muhlenfels Memorial (above the fourth bay arch on the south side), Henry Lee Willet, artist. Design executed by Willet Stained Glass Studios.

4. The Goodness Memorial (above the fifth bay arch on the south side), Nancy Howell (born 1955), artist. Subject: "Let the Children Come to Me." Design executed by the Gil Studio.

5. The Loomis Memorial (above the third bay arch on the north side), John Humphreys Johnston, artist. Subject: "The Two Marys at the Sepulchre."

6. The Sinaly Memorial (above the fourth bay arch on the north side), Colum Sharkey (born 1922), artist. Subject: "Consider the Lilies of the Field." Designed and executed by Willet Stained Glass Studios.

Five windows consisting of 123 illustrations depicting incidents from the story of Creation to the story of Judas Maccabeus. Designed and executed by .

The twelve bells, made by John Taylor & Co. in , , and presented to the church as a memorial in 1933, range from middle C to the second E above the diatonic scale of C, also the raised fourth and flat seventh (F# and B-flat). The memorial tablet in the vestibule for the tower bells was designed by Ruth Brooks.

* [http://www.ascensionnyc.org The Church of the Ascension]