With historical strengths in engineering, business, geology, and medicine, it is one of the top comprehensive universities in Canada.[3] With over 17,500 students, it is also the largest university in Atlantic Canada.[4] MUN's four main campuses are served by more than 900 faculty and 2,300 staff members. Memorial University of Newfoundland has been featured in the SJTU World university rankings, the TOP 500 and many other rankings.

MUN has four main campuses and two satellite campuses across three regions of Newfoundland and Labrador, and in two countries (Canada and England). The main campus in St. John's, Newfoundland and Labrador is split by Prince Philip Drive where the northern section is bounded by Pippy Park, and the southern section is largely surrounded by residential areas.

The largest campus is located in St. John's. Prince Philip Drive runs east-west through the main campus, with Westerland Road bordering it to the west, Elizabeth Avenue to the south and Allandale Road to the east. The majority of the academic buildings are located south of Prince Philip Drive; the Arts and Administration building, Science building, Chemistry and Physics, Mathematics, Music, Education, Physical Education and the Bruneau Centre for Research and Innovation.

The Queen Elizabeth II Library, also located south of the Parkway, contains 1,058,500 monographs, 93,900 maps, 13,600 audio-visual titles and over 9,000 journal titles. The Commons, located on the main floor of the library, has computers available for use by students as well as a Digital Media Centre. The University Centre is home to the food court, bookstore, campus bar ("Breezeway"), and the CHMR-FM campus radio station.

The Marine Institute is a marine polytechnic institution located on Ridge Road in St. John's within Pippy Park, north of the city. It has unique facilities such as a full ships bridge simulator and the worlds largest flume tank. It offers degrees, diplomas, certifications and industry training for the maritime sector.

The Grenfell Campus is a 185-acre (75 ha) site in Corner Brook. It has approximately 1400 students, 156 faculty, 235 staff and offers programs in the Arts, Fine Arts, Business, Science, Resource Management and Nursing.

It had been referred to as Sir Wilfred Grenfell College until September 10, 2010.

The Harlow Campus, located in Old Harlow, Essex, England consists of the Maltings, which can accommodate 30 students and Cabot House which can accommodate 10 students. A former schoolhouse and a teacher's cottage have been converted into a lecture facility and an apartment and a former shop has been converted into apartments. Memorial's Harlow Campus is not a school unto itself. Rather, professional schools and academic departments at Memorial use the Harlow Campus to deliver special programs. Harlow offers courses in Biology, Business, Drama & Performance, English Cultural Landscape, Fine Arts (both Theatre and Visual Arts), Faith, Love & Lore and History & Political Science. 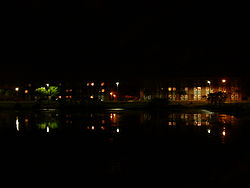 There are over 17,000 students currently enrolled in full and part time studies at MUN. This number includes both undergraduate and graduate students. Approximately 85% of students are from Newfoundland and Labrador. The most popular programs include Engineering, Business Administration, Nursing, Education, English, Folklore, French, History, Biology, Biochemistry, and Psychology. The university has an international reputation in a variety of disciplines. In particular, it is well recognized as having one of the top folklore departments in the world.

The first president was J. L. Paton. It offered the first two years of university studies. MUC's initial enrollment was 57 students, rising to a peak of over 400 in the 1940s. In 1933 it merged with the adjacent Normal School and took responsibility for teacher training. During the College's early years it received considerable support from the Carnegie Corporation of New York.

The enrollment in MUN's first year was 307 students. In 1961, enrollment having increased to 1400, MUN moved from Parade Street to its present location on Elizabeth Avenue (Main Campus). [6]

On8 March 1965, the government of Newfoundland announced free tuition for first year students enrolled at Memorial University in St. John's. [10] The Faculty of Medicine of Memorial University of Newfoundland was established in 1967, and the first students were admitted in 1969. It admits approximately 60 students into the M.D. program each year, and also offers M.Sc. and Ph.D. programs.

MUN maintains a campus in Harlow, England which opened to students in 1969. This campus has been a popular location for internships in Education, and now offers credit courses, work terms, and internships in a number of areas. The campus accommodates approximately 50 students.

Memorial established the Institut Frecker in St. Pierre in 1973, to offer one-semester French immersion programs. It was housed in a building provided by the archdiocese of St. Pierre until 2000. Now known as the Programme Frecker, it is currently run from the FrancoForum, a language teaching facility owned by the government of St. Pierre. The program is partly supported by the governments of Canada and Newfoundland and Labrador.

In September 1975 a campus was opened in Corner Brook; it was first renamed Sir Wilfred Grenfell College in 1979 and renamed again in 2010 as Grenfell Campus, Memorial University of Newfoundland. Currently 1300 students attend Grenfell, which offers full degree programs in several disciplines, including Fine Arts, and partial programs, which can be completed at the main campus, in many other subjects. 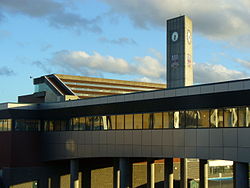 The St. John's campus of MUN 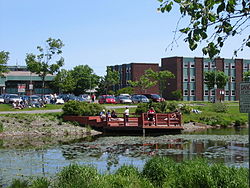 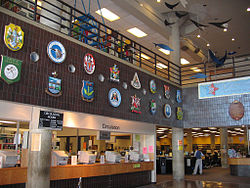 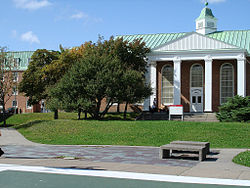 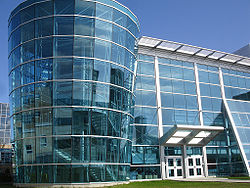 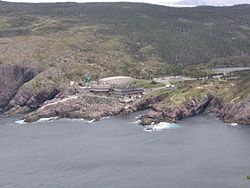 In 1977, the Memorial University of Newfoundland Educational Television Centre implemented the Telemedicine project.

Queen's College, an affiliated College of Memorial University, offers diploma and degree studies in theology, pastoral studies, church history and related programs. Queen's College is an associate member of the Association of Theological Schools in the United States and Canada.[12]

The university's motto, Provehito in Altum (Launch forth into the deep), captures the spirit of the adventure of learning and urges students to extend the frontiers of knowledge. The shield of arms bears a representation of the sea, books, and a cross. The Arms of Memorial University have as their central element a cross moline, which is a fitting symbol for an institution dedicated to the memory of soldiers of Newfoundland who died during the Great Wars.

The Memorial University of Newfoundland Botanical Garden is a botanical garden operated by the university. It is located at Oxen Pond along Mount Scio Road in the suburbs of St. John's and was founded in 1972. The park has adopted the Twinflower (Linnaea borealis) as its emblem.

Memorial University also has a very active student media including a radio station, CHMR-FM, and a newspaper, The Muse.

The Globe and Mail's 2009 University Report Card, which is a national survey on student satisfaction gave MUN the following grades in the Medium-sized University category:

On November 11, 2010 Maclean's magazine ranked MUN number 5 of 12 in its comprehensive university rankings for the second year in a row.

In the 2007 Academic Ranking of World Universities published by The Institute of Higher Education of Shanghai Jiao Tong University, MUN placed in the fourth quintile category (305th–401st overall) of the top 500 universities of the world.