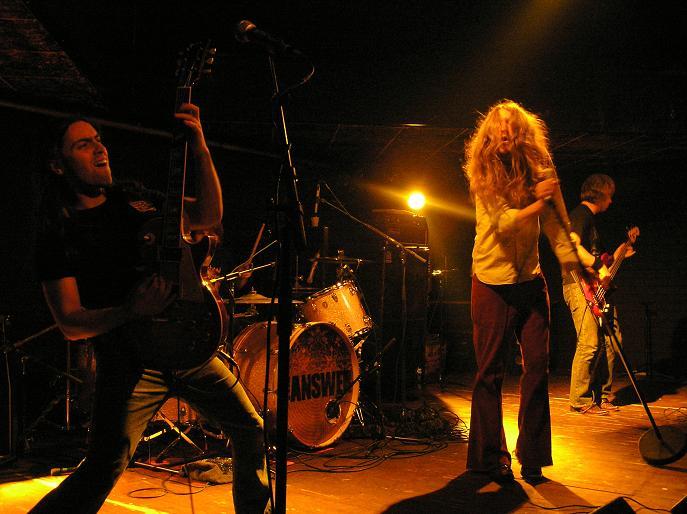 The Answer were formed in 2000 by guitarist Paul Mahon, whose father was a jazz trumpeter and member of seminal Irish The Freshmen, who released three albums on and toured with the likes of the . Aged 18, Paul knew he wanted to put together a rock band and mentioned it to bassist Micky Waters, an old school friend who had been in numerous cover bands around Belfast.

James Heatley, who had played as Ash’s stand-in live drummer in 1993 (when Rick was doing ), was recruited to be the drummer for The Answer. Paul called him up only to find that he was about to take his finals at University, so the trio waited whilst James completed his degree in Psychology.

In late June 2000, the four of them got together for their debut rehearsal. 2001 was spent writing, rehearsing, gigging locally and building up a set The Answer. By 2002, the band had attracted the attention of MCD promotions in Ireland, (the company who recently bought out the Mean Fiddler Group, alongside Clear Channel), who put them on as openers at the Witnness Festival that year.

In 2005, 'Classic rock' magazine voted The Answer as 'Best New Band 2005' [ [http://www.metalhammer.co.uk/news/article/?id=42645 Metal Hammer News Article] ] , which brought them even more exposure. Shortly after, in November 2005, came their second official release - the single "Never Too Late" with a 'B side' "Rock Bottom Blues" originally called "Stevie Blues", homage to a young blues singer from Belfast who took on Neeson's vocal influence and style in his band "Swanee River". They supported at an intimate show at the on , . Then came "Into The Gutter" which was released on , via 7" vinyl and download only, shortly followed by debut album "Rise" released on , . The album has already received rave reviews from and The SunFact|date=September 2007 amongst others, and has been nominated for "Classic Rock" magazine's 'Album Of The Year' and "Best British Newcomer" in the 2006 Kerrang! awards.

The Answer played several festivals over the summer months, as well as a support slot with throughout their UK tour. The band also managed to secure themselves another support slot with at the in early October 2006. This was followed by a co-headlining tour with fellow British Rockers on a tour across the UK and Europe, with further support coming from American blues-rock band . The band is once again on tour at the moment, with dates in Australia and across Europe before eventually returning for dates in Ireland and to start work on their follow-up to "Rise". The band were an opening act for on June 24th 2007 at .

Latest single "Be What You Want" was released , and is currently available via download-only.

The Answer have decided to re-issue the Rise album as a promotion for their summer shows and because there have been so many people complaining about download only singlesFact|date=September 2007. A second disc adds to the original Rise, featuring all the relevant b-sides that have not been released physically and some tracks that were recorded for the album but left off. The second disc has 15 unreleased songs on it and was released . The band are also now confirmed for the Lowlands Festival in Biddinghuizen, .

The summer of 2007 also saw the band support The Rolling Stones at huge open-air gigs in Belgrade (Serbia), and Dusseldorf (Germany), and The Who in Dublin (Ireland).

They played a live set at the Planet Rock Radio Christmas Party, on December 11th 2007 at the Islington Academy, London, during which they were joined on stage by the legendary Free & Bad Company vocalist Paul Rodgers.

In June 2008 they played a short set at the Isle Of Wight Festival. A few days later they boarded an aeroplane bound for Los Angeles, where they entered a recording studio with John Travis to lay down the tracks for their second album. This album is scheduled for release in the first quarter of 2009. Sharing mixing duties are and .

In the final weeks of 2008 The Answer was to be touring the UK as special guests of Black Stone Cherry, but it is now confirmed the band will be the oppening act for the legendary instead.

*The band played at a memorial benefit gig in , when Micky Waters played Phil Lynott's black bass, becoming the first person to do so since Lynott’s death. The same instrument is used by Waters in the for "Keep Believin"'.

*They also covered the song "Sweet Emotion" for a free CD. This was included on the second disc of the Special Edition of the "Rise" album.

*'s lead singer is a fan of the band and during an interview with AOL has cited them as a possible influence to the way their forthcoming album will sound. He also said, "They're amazing--They could be the new Free!" [ [http://www.hoovers.com/free/news/detail.xhtml?ArticleID=20070629670.4_fbb0004555f641d2 News Article] retrieved 11th September 2007 ]

*Former guitarist is also a fan and has attended several of the band's gigs and stated so at the 2005 magazine Roll of Honour Awards.

*The song "Into the Gutter" is featured in the soundtrack to the video game "Pure" [cite web | url = http://www.gamezone.com/news/08_28_08_11_00AM.htm | title = Disney Interactive Studios Announces Eclectic Soundtrack for PURE ]