Chalfont St Giles is a village and civil parish within Chiltern district in south east Buckinghamshire, England, on the edge of the Chilterns, 25 miles from London, and near Seer Green, Jordans, Chalfont St Peter, Little Chalfont and Amersham.

Chalfont means chalk spring, in reference to the water carrying capacities of the local terrain. The village has a duck pond that is fed by River Misbourne.

The Church of England parish church of Saint Giles is Norman and dates from the 12th century.[2] It has a fine example of a lychgate. The Bishop Francis Hare is buried there.

In the Domesday Book in 1086 Chalfont St Giles and Chalfont St Peter are listed as separate Manors with different owners. They were separate holding before the Norman Conquest.

Like most other rural parishes it managed its civil affairs through the vestry until the Local Government Act 1894 required all parishes of over 300 people to have a Parish council independent of the Church. 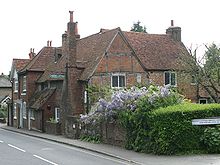 During the Great Plague of London in 1665, John Milton retired to Chalfont St Giles, which is where he completed his epic poem Paradise Lost.[3] Milton's Cottage is still in the village, and is open to the public. The inspiration for Paradise Regained is said to have been found in this parish from a conversation with a former pupil, Thomas Ellwood.

The birthplace of J.T. Hearne, one of the greatest bowlers of the 1890s and 1900s, who died there in 1944, and of the actress Alexandra Gilbreath.

The village has also given its name to Chalfont, Pennsylvania, which is a borough in Bucks County, Pennsylvania.

The local football club is Chalfont Wasps, which was promoted to the Hellenic Football League Premier Division for the 2008-09 season. Chalfont St Giles has a tennis club, affiliated to the Lawn Tennis Association.[6]

The village is twinned with Graft-De Rijp in the Netherlands.

Chalfont St Giles has been the location of several film and television programmes. It doubled as Walmington-on-Sea in the 1971 film version of Dad's Army. John Laurie, one of the main actors, lived in Chalfont St Peter. The Miller's Tale episode of the BBC Television drama The Canterbury Tales was filmed in and around Chalfont St Giles[7] as was an episode of the BBC Television sitcom As Time Goes By. It was the location for the filming of Episode 6 of Series 3 of Peep Show.[8]

"Chalfonts" is one of many variations of Cockney rhyming slang for piles, this is derived from Chalfont St Giles but, as is typical with Cockney rhyming slang, the part of the phrase which rhymes with the derivative is omitted. There is a Viz comic strip named Nobby's Piles in which the protagonist, Nobby, uses a range of slang expressions when referring to his haemorrhoids including "Ooh, me chalfonts!"