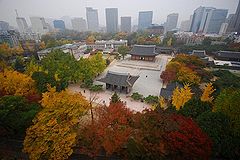 The Deoksugung palace in Seoul, a popular visitor attraction

Tourism in South Korea refers to the tourist industry in the Republic of Korea. In 2007, 6.4 million foreign tourists visited South Korea, making it the 36th most visited country in the world,[1] and this number is expected to exceed 8.5 million in 2010.[2] Most non-Korean tourists come from Japan, China, Taiwan and Hong Kong. The recent popularity of popular culture in these countries has increased tourist arrivals. Seoul is the principal tourist destination for visitors; popular tourist destinations outside of Seoul include Seorak-san national park, the historic city of Gyeongju and semi-tropical Jeju Island. Traveling to North Korea is not normally possible without a special permission, but in recent years organized group tours have allowed groups of South Korean citizens to visit Kumgang-san.

The majority of the South Korean tourist industry is supported by domestic tourism. Thanks to the country's extensive network of trains and buses, most of the country lies within a day's round trip of any major city. International tourists come primarily from nearby countries in Asia. Japan, China, Hong Kong and Taiwan together account for roughly 75% of the total number of international tourists[citation needed]. In addition, the Korean wave has brought increasing numbers of tourists from Southeast Asia.

International tourists typically enter the country through Incheon International Airport, near Seoul, which was found to be the world's best airport in 2006.[3] Also international airports in Busan are frequently used.

Some natural landmarks include the peaks of the Baekdudaegan, particularly Seorak-san and Jiri-san, the caves of Danyang and Hwanseongul, and beaches such as Haeundae and Mallipo.

Apart from Jeju island, there are many smaller islands. Excursion ferries are quite common along the south and west coasts and also to Ulleung-do Island, off the east coast. Limited tourism mainly by South Koreans to the Liancourt Rocks (Dokdo) has grown in recent years as a result of the political status of the rocks.

Many local districts hold annual festivals, such as the Boryeong Mud Festival and the Cheongdo Bullfighting Festival.

Since the economic rise of the 1980s, South Korean visits to other countries have grown steadily. In 2006, South Koreans spent more than 10 trillion won ($11.1 billion) on overseas tourism.[4] The majority of South Korean travelers visit the neighboring countries such as China and Japan, but many also go to places in Southeast Asia, North America, Europe, and Oceania.

Since the late 1990s, a limited number of tourists from South Korea have been permitted to visit certain cites in North Korea. The most prominent example is the renowned mountain Kumgang-san, near the DMZ. Visits to Mt. Kumgang-san were suspended by the South Korean government after the shooting death of a South Korean tourist in July 2008. Since April 2010, North Korea is now permitting companies to run tours from the North Korean side,[5] making it appear increasingly unlikely that tours will be resumed from the South.

South Korea has hosted many international events, including the 1988 Summer Olympics, the 2002 FIFA World Cup (jointly hosted by Korea and Japan), the 2005 APEC conference, and the 1993 Taejon Expo