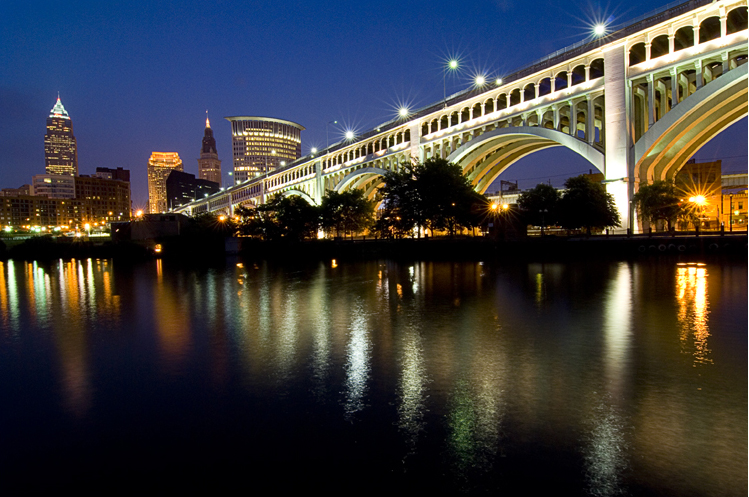 The Detroit-Superior Bridge (officially known as the Veterans Memorial Bridge) is a 3,112 foot (949 meter) long over the in Cleveland, . The bridge links Detroit Avenue on Cleveland's west side and Superior Avenue on Cleveland's east side, terminating west of . Construction by the began in 1914 and completed in 1918, at a cost of $5.4 million. It was the first fixed high level bridge in Cleveland, and the third high level bridge above the Cuyahoga (the first was the Old and the second the , also built by the King Company). At its completion, the bridge was the largest steel and concrete reinforced bridge in the world.

The bridge has 96 feet (29 meters) of clearance above the river and rises to 196 feet (60 meters) above the river at the peak of the central span. The bridge has an upper level for road traffic and a lower level (intended for s) that has been closed since streetcar operations ceased in 1954. It was added to the on , .

The bridge and subway station are open to the public for tours a few times per year, typically around Memorial Day and Labor Day. Self-guided tours are free of charge. [ [http://www.cuyctyengineers.org/subway_tour.htm Veterans Memorial Bridge and Subway Tours] , Cuyahoga County Engineer's Office. Accessed .]