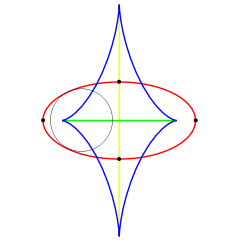 An ellipse (red), its evolute (blue), and its medial axis (green). The symmetry set, a super-set of the medial axis is the green and yellow curves. One bi-tangent circle is shown.

The medial axis of an object is the set of all points having more than one closest point on the object's boundary. Originally referred to as the topological skeleton, it was introduced by Blum [1] as a tool for biological shape recognition. In mathematics the closure of the medial axis is known as the cut locus.

The medial axis is a subset of the symmetry set, which is defined similarly, except that it also includes circles not contained in S. (Hence, the symmetry set of S generally extends to infinity, similar to the Voronoi diagram of a point set.)

The medial axis generalizes to k-dimensional hypersurfaces by replacing 2D circles with k-dimension hyperspheres. The 2D medial axis is useful for character and object recognition, while the 3D medial axis has applications in surface reconstruction for physical models, and for dimensional reduction of complex models.

If S is given by a unit speed parametrisation

is the unit tangent vector at each point. Then there will be a bitangent circle with center c and radius r if

For most curves, the symmetry set will form a one dimensional curve and can contain cusp. The symmetry set has end points corresponding to the vertices of S.

(a) A simple 3d object. (b) Its medial axis transform. The colors represent the distance from the medial axis to the object's boundary.